It’s not just the Confederate flag: the Pentagon’s new ban may apply to the Jolly Roger

Bad news, service members: the Pentagon will no longer permit you to let your freak flag fly. 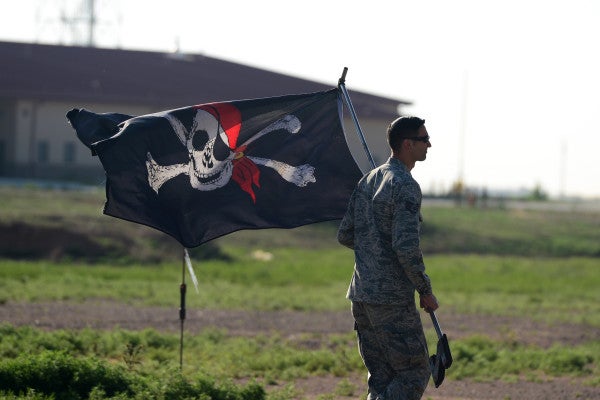 Bad news, service members: the Pentagon will no longer permit you to let your freak flag fly.

On Friday, the Defense Department issued a new memorandum defining exactly which flags can be flown at U.S. military installations, an effective ban on the Confederate flag in the midst of a growing campaign to strip the symbols from bases across the country.

“Flags are powerful symbols, particularly in the military community for whom flags embody common mission, common histories, and the special timeless bond of warriors,” Defense Secretary Mark Esper wrote in the memo. “The flags we fly must accord with the military imperatives of good order and discipline, treating all our people with dignity and respect, and rejecting divisive symbols.”

According to the memo, the only flags now permissible at U.S. military installations include flags of U.S. states and territories; military service flags, general officer and Senate-confirmed civilian flags, and the POW/MIA flag, among others.

But while this means that the Confederate flag is no longer welcome in U.S. military installations, it also means that several other popular flags are getting the ax — including the beloved Jolly Roger.

According to the Washington Post, the Jolly Roger has been a fixture on Western warships since the start of World War I, when a British submarine hoisted the pirate banner following the sinking of a German battlecruiser. More recently, the Seawolf-class nuclear-powered submarine USS Jimmy Carter was spotted with one while returning to her homeport back in 2017, potentially to “represent the success of a more covert mission,” according to the Post.

When asked if submariners could still fly the Jolly Roger on returning from missions, Pentagon spokeswoman Lisa Lawrence told Task & Purpose: “The memorandum does not authorize public display of unlisted flags in the Department of Defense.”

However, the Defense Department policy does allow services and units to fly ceremonial flags, though it's unclear whether the Jolly Roger might be considered one of them.

If the Jolly Roger is outlawed under the new Defense Department policy, it's likely other unofficial flags will also end up banished from military installations, including two of our favorites: the Captain America banner and the Rebel Alliance flag.

In March, our eagle-eyed friends at The War Zone noticed that the amphibious assault ship USS America appeared to be flying a flag featuring the fictional super-soldier's iconic shield emblazoned across a blue backdrop from the vessel's island superstructure, a regular feature of the warship during operations in the Pacific stretching back at least to December 2019.

The new guidance also likely applies to the Rebel Alliance flag flying at Camp Lemonnier in Djibouti, which Task & Purpose spotted at the top of an Army press release from March 2019 regarding the East Africa Response Force's deployment to Gabon.

According to the Army's specific guidance on flag displays, “individuals are authorized to display or depict representational flags that promote unity and esprit de corps.” But given that the Army was unable to confirm to Task & Purpose at the time whether the service was in fact part of the Rebel Alliance, it's unclear if the banner falls under that category.

All of these flags are significantly better than the Confederate flag for obvious reasons. Now they're verboten. Take from that what you will.