What screams 'America' more than a U.S. Navy amphibious assault ship laden with F-35s? Try one that's flying a tribute to Captain America while out on the high seas 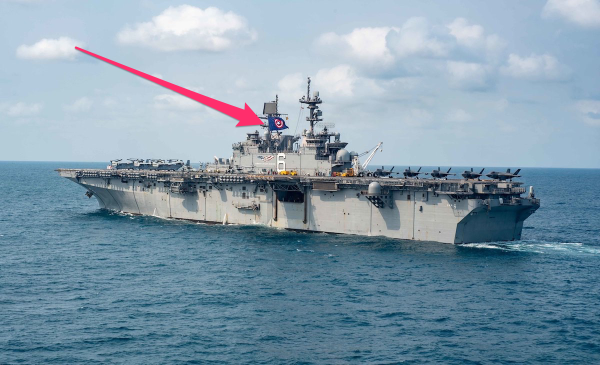 What screams ‘America’ more than a U.S. Navy amphibious assault ship laden with F-35s?  Try one that’s flying a tribute to Captain America while out on the high seas.

Our eagle-eyed friends at The War Zone first noticed that the USS America appears to be flying a flag featuring the fictional super-soldier’s iconic shield emblazoned across a blue backdrop from the vessel’s island superstructure.

Cobra Gold isn’t the first time that the USS America has flown its Captain America flag. Publicly-released Navy photos show the banner flapping in the wind in January during an exercise with the USS Blue Ridge, USS Green Bay, and USS Germantown in January 2020:

The flag also appeared when the USS America arrived in Sasebo, Japan, in early December 2019 to join 7th Fleet as the flagship for Expeditionary Strike Group 7 while conducting routine operations in the Western Pacific.

Created by legendary scribes Joe Simon and Jack Kirby for Marvel Comics’ predecessor Timely Comics, frail and sickly Steve Rogers was transformed into Captain America thanks to an experimental super-soldier serum and a hefty dose of radiation.

While Captain America’s popularity waned during the post-World War II era of comics publishing, Marvel Comics revived the hero in 1964 after decades in suspended animation. Brought into the modern era by the Avengers, Captain America would become the heart and soul of the team, a role reflected in the Marvel Cinematic Universe’s big-screen depiction of the patriotic hero.

But it’s worth noting that, at least in the comics, it’s the circular vibranium shield and not the super-solder serum that help define Captain America. Indeed, two of Rogers’ closest allies — James “Bucky” Barnes (The Winter Solder) and Sam Wilson (The Falcon) — have both wielded the shield of Captain America, taking on the mantle of America’s premier hero in the process.

The message is simple: Captain America is an idea, not a person, and that idea has power far beyond the limits any masterfully-engineered shield or super-solder serum. Indeed, if comics books are a tool of soft power, Captain America may be one of the most recognizable symbols of American patriotism both abroad and at home.

So here’s to you, USS America, for rocking Captain America’s shield during your travels in the Pacific — even if that means we have to overlook the fact that a vessel full of Marines and sailors is basically worshiping a lowly Army captain.