"I needed gems for the good of the clan." 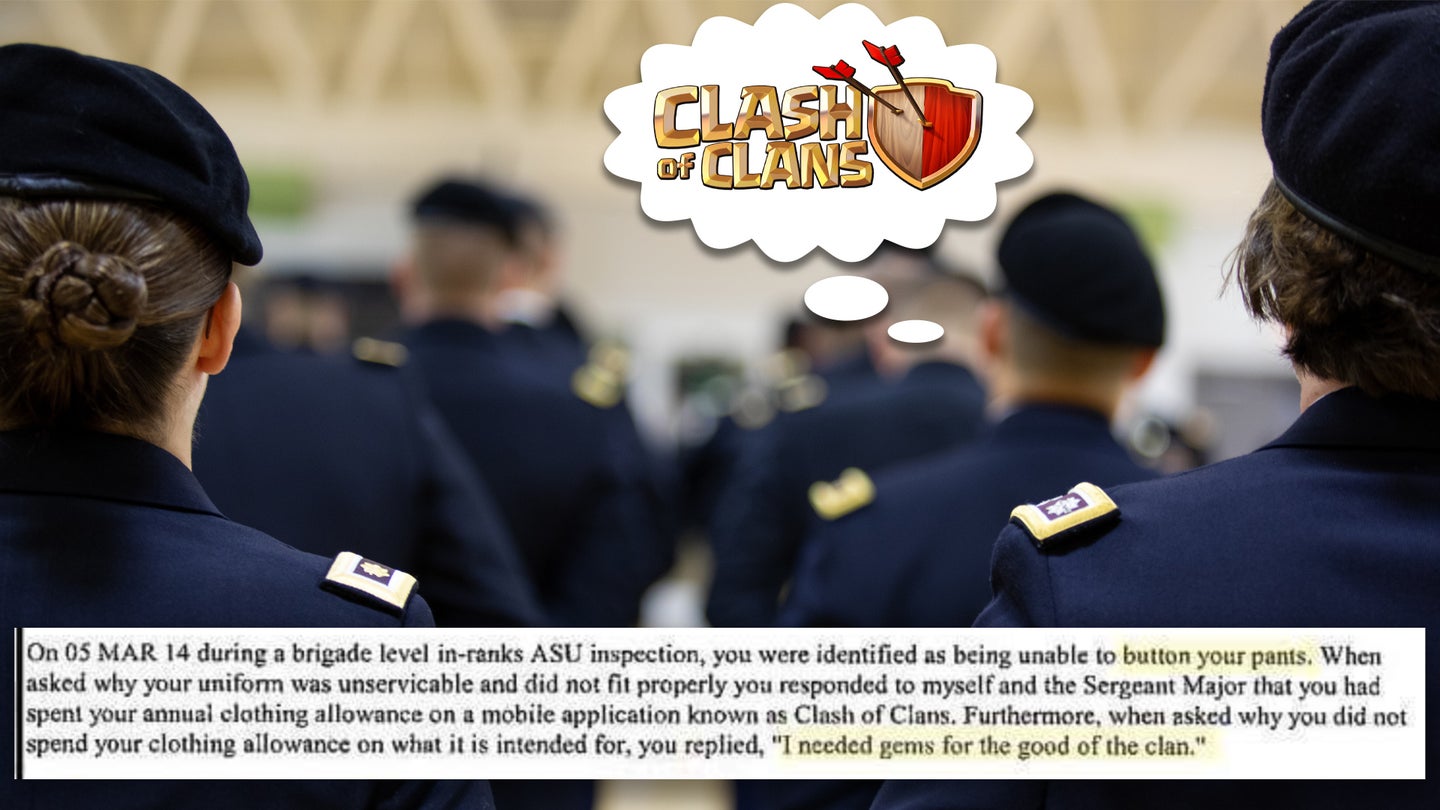 Honesty is the best policy. Unless, of course, that honesty leads you to tell your sergeant major that the reason your uniform doesn’t fit right is because you spent your uniform allowance on a game on your phone.

A counseling statement from March 2014, which was resurfaced on the unofficial Army Reddit page this week, reveals that a soldier nearing the end of their service had bigger priorities in life than making sure their uniform fit properly.

The soldier, identified only as a non-commissioned officer, was “unable to button” their pants during a brigade level uniform inspection, the counseling statement says. It goes on to say: “When asked why your uniform was unserviceable and did not fit properly you responded to myself and the Sergeant Major that you had spent your annual clothing allowance on a mobile application known as Clash of Clans.”

I should take a moment to admit that I am not very familiar with Clash of Clans, but I am familiar with soldiers doing ridiculous shit. I also asked my brother to give me a brief rundown of what I needed to know about the game, so I feel like I have sufficient background knowledge to say in response to that counseling statement: Of course this happened.

But wait, it gets better.

“Furthermore,” the counseling statement reads. “When asked why you did not spend your clothing allowance on what it is intended for, you replied ‘I needed gems for the good of the clan.’”

The bow that so nicely ties this counseling statement together is the acknowledgement that this soldier “will soon ETS,” which tells me all I need to know. Why spend money on your uniform when you’re leaving soon? Especially when there are gems to buy, raids and missions to complete, clans to protect?

As one Reddit user put it: “’Although you will soon ETS…’ = ‘We know you don’t give a fuck anymore, but can you at least pretend for my sake.’”

The statement concluded by saying the NCO’s “blatent [sic] disregard for your appearance, as well as disrespectful attitude towards myself and the Sergeant Major is unacceptable.”

But isn’t there something to be said for someone who sticks by their clan? Where is justice in this world, I ask you? Another Reddit user saw it the same way, saying the NCO “demonstrated true leadership by placing the good of the clan before himself.”

My brother agreed: “Lmaoo,” he texted me when I told him what this article would be about. “That’s hilarious, he must be really dedicated to his clan.”