"This is in no way intended to glorify the German forces, but to fully portray the odds stacked up against the Americans by December 19th" 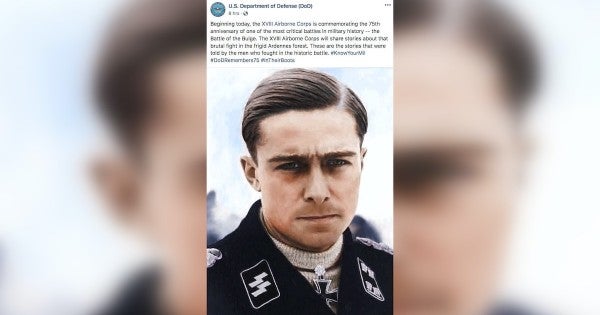 Don't worry: You have not crossed into the alternative universe portrayed in The Man in the High Castle wherein the Nazis won World War II.

That said, voracious consumers of Defense Department social media content might have been slightly confused on Monday when the 18th Airborne Corps posted a story on Facebook to commemorate the 75th anniversary of the Battle of the Bulge that prominently featured a colorized portrait of infamous Waffen-SS Obersturmbannfǘhrer Joachim Peiper.

Peiper is best known as the Nazi commander whose troops murdered 19 American prisoners at Honsfeld, Belgium, and shot another 84 captured American soldiers at Baugnez, which is also in Belgium. The crimes so incensed American forces that top U.S. commanders encouraged GIs to execute any SS troops taken prisoner, author Anthony Beevor wrote in “Ardennes 1944: The Battle of the Bulge.”

In other words: he was one of the baddies.

'Are we the Baddies?' Mitchell and Webb Funny Nazi Scetch

The 18th Airborne Corps' story — along with Peiper's mug — was quickly shared on the 10th Mountain Division and Defense Department's official Facebook pages. The reaction was immediate and harsh and the post was quickly taken down – but not before screenshots of it were shared widely on Twitter.

“I am dumbfounded by the decision to prominently display a Nazi on military social media on the 75th anniversary of the Battle of the Bulge,” tweeted Army Lt. Col. Brian Fickel, a service spokesman who is currently attending the Army War College.

On Tuesday morning, 18th Airborne Corps tweeted that it regretted using Peiper's picture with the story.

“In an attempt to tell the full story of the fight, we also present the perspective of the German commanders involved in the counterattack,” Corps spokesman Col. Tage Rainsford said in a statement to Task & Purpose. “This is in no way intended to glorify the German forces, but to fully portray the odds stacked up against the Americans by December 19th.”

The Corps also deleted a tweet reported by NBC which called Peiper a “terrible person” but an “effective combat leader.”'

“A teenager when Hitler come to power, Peiper joined the SS after serving as a member of the Hitler Youth,” NBC reported the tweet as saying. “He rocketed through the ranks during the war, racking up medals, & promotions.”

After the war, Peiper spent more than 11 years in prison. He later moved to France and was ultimately killed by former members of the French resistance in 1976. His victims had finally been avenged.