‘All I remember is thinking if I hit the ground, I’m dead’ — Christmas Day at the Battle of the Bulge 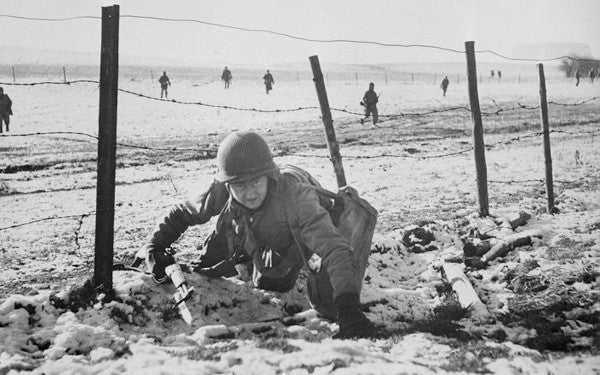 “All I remember is thinking if I hit the ground, I’m dead.”

It was just after 8 a.m. on Christmas morning, 1944, outside the village of Echternach, Luxembourg, when a bullet from a Nazi machine gun found its way into Lt. James P. Teehan’s helmet.

Teehan, who died in 2000 at the age of 78, had been dispatched as a forward observer for the Army’s 802nd Field Artillery Battalion. He was about as far from the family dairy in Springfield as he could have imagined when he and his party set out to capture a Nazi-held chateau that stood between them and Bastogne, Belgium.

For nine days, the Nazis had been battling their way back into Luxembourg and Belgium from which the Allies had chased them only weeks earlier. On Dec. 16, the Germans had launched what would be Adolf Hitler’s last great blitzkrieg of World War II.

It began with a massive attack by three German armies of close to 200,000 soldiers along a 40-mile front in the Ardennes Forest of Luxembourg and continued with the Nazis pressing westward into Belgium and aiming for the port city of Antwerp.

It became known as the Battle of the Bulge, so named for the bulge the Nazi forces managed to make in allied lines. “This is undoubtedly the greatest American battle of the war and will, I believe, be recognized as an ever-famous American victory,” British Prime Minister Winston Churchill would tell the House of Commons on Jan. 18, 1944.

“The Nazis told us they would be back for Christmas. . . They were,” Anne-Marie Boissy, of Palmer, remembered in 1994 on the occasion of the 50th anniversary of the war.

In her village of Stavelot, Belgium, that morning a half century ago, Boissy and her sister, Emilie, had to dash from doorway to doorway, grabbing what little shelter and safety they could as shelling and artillery fire savaged the town while American GIs beat back the German drive to take control of Stavelot.

Her family wanted to go to church to pray for an end to the war that had wracked their country for four years. “I wanted to thank God we were alive,” Boissy, who died in 2008 at the age of 84, recalled.

Boissy and her family had been living in a cellar with more than a dozen relatives, giving aid when they could to the American soldiers.

“You managed. The cellar was warm,” she recalled. “We would use candles for light and would make soup from the vegetables stored from the summer. My parents knew how to survive.”

Frederick Czupkiewicz, of South Hadley, didn’t even know it was Christmas until the young German lieutenant – in perfect English – told him it was “one of your big holidays.” His captor had been living and working in the U.S., Czupkiewicz learned later, until the war broke out and his country called him home to serve as a soldier.

Czupkiewicz’s task force from the 328th Infantry Regiment, part of New England’s own 26th Yankee Division, had run into tough opposition near Eschdorf, Luxembourg, when they found themselves outgunned by a German tank crew.

Czupkiewicz, who died in 2015 at the age of 98, was holed up inside a barn when the enemy arrived to take prisoners. “I figured it would be better to be shot than be burned in the barn, so I went out,” he recalled in 1994.

The telegram from the War Department, telling his wife he was missing in action, wouldn’t arrive for 29 days just as the Allies were routing the Germans from the Bulge and their daughter, Donna, was being born at Providence Hospital in Holyoke, according to Czupkiewicz.

The priest who had married them four years earlier delivered the news and told her not to worry: “You’re not going to kill that old Polack.”

“All we did was sweat it out,” recalled Stanley J. Pazik, of Westfield. “You never even thought about Christmas. I never had a watch. I didn’t know the time or the day.”

Pazik, who died in 2003 at the age of 86, was one of the “Battered Bastards of Bastogne,” a member of the 502nd Paratroop Regiment of the Army’s 101st Airborne Division who had survived parachuting behind enemy lines into Normandy, France, on D-Day six months earlier and again into Holland as part of Operation Market Garden in mid-September where he was wounded by “a bullet intended for my head. It hit the ground before it hit me and broke into small pieces.”

Here, the 101st would find itself trucked from France to Belgium on flatbeds and transformed into a front-line infantry unit. “Going in by air was just a form of transportation. It had nothing to do with fighting,” Pazik said.

Although they arrived in time to save Bastogne from the Nazis, the 101st was cut off by one of Hitler’s Panzer tank divisions and trapped for close to a week. “It was like a doughnut. The whole division was completely surrounded.” It was here that the division’s commander, Brig. Gen. Anthony C. McAuliffe would deliver his alleged reply, “Nuts!,” to the Nazi demand for surrender.

Gus Theodore’s anti-aircraft artillery battery, part of the “Big Red One,” the Army’s 1st Division, spent Christmas Day 1944 firing back at a squadron of German aircraft strafing and bombing their line.

“Our gun section hit one of them, and the pilot bailed out. Most of the GIs were so mad about the Malmedy Massacre (where 90 American POWS were killed in a farm field on Dec. 17) that when he was coming down in his parachute, they opened fire on him. He was dead when he hit the ground,” recalled Theodore, who died in 2007 at the age of 81.

Back home in Western Massachusetts on this day 75 years ago, residents would wake up to headlines in the Christmas edition of The Springfield Union that heralded: “Yanks Begin Pushing Back Nazis.”