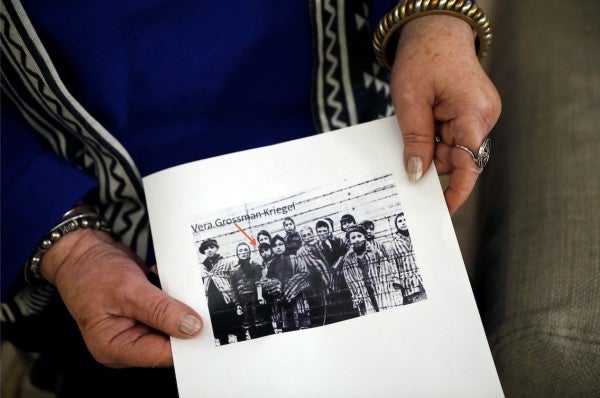 JERUSALEM (Reuters) – A strip of skin tattooed with the Auschwitz death camp number 99288 sits in a silver frame on a shelf in Avraham Harshalom's living room. It is his prisoner number, etched on to his forearm in 1943.

Harshalom is one of some 200,000 Holocaust survivors living in Israel today. But with every passing year, fewer remain to provide first-hand testimony to the atrocities committed by the Nazis in World War Two.

Six million Jews were killed in the Holocaust.

“The Second World War is no longer a family story that you hear at home. For many it has become a history textbook story,” said Pawel Sawicki, press officer at the Auschwitz Memorial, at the site of the camp built in Nazi-occupied Poland. “The biggest challenge is how to tell this story in a way relevant to them today and in the future.”

More than a million people, nearly all of them Jews, died at Auschwitz, whose name has become synonymous with the industrial-scale killings carried out at the Nazi death camps.

Harshalom, who was born in a small Polish village, was 17 when he arrived at Auschwitz. Harshalom, born Avraham Frydberg, was selected by the SS for work at the camp. It saved his life: those deemed unfit for labor were sent to immediate death in the camp's gas chambers. Among those killed were his parents and his brother.

Holocaust survivor Avraham Harshalom, 95, shows a framed and displayed strip of his skin tattooed with the Auschwitz death camp number during an interview with Reuters at his home in Ramat Gan, Israel December 24, 2019. (REUTERS/Nir Elias)

Harshalom had his tattoo removed soon after moving to the newly-founded state of Israel in 1949, where he started a family and built a career as a businessman. In the years immediately following the war the tattoo kept inviting questions; people simply didn't know what it meant, even in Israel, he said.

“At first, say 20 years after the war, all Holocaust survivors and especially prisoners of Auschwitz were not talking at all (of their experiences),” he said. “We were not talking because people didn't believe … that what we are telling is true.”

SAVED BY A FUR COAT

Artemis Meron, from a small Jewish community in Greece, was 15 when in 1944 she was transported to Auschwitz with her mother and nine-year-old brother. She and other Jews rounded up in Greece were packed by the hundreds into freight carts with hardly any room to move. One bucket held water to drink, another served as the only toilet. Many died on the journey, their bodies slung into one of the train-cars.

Upon arrival at Auschwitz they were lined up into rows – young men on one side and young women on the other. In the middle the elderly, mothers and children were shoved into military vehicles.

Inmates are seen lying on bunks in a barrack at Nazi German death camp Auschwitz-Birkenau after its liberation in 1945 in Nazi-occupied Poland, in this undated handout picture obtained by Reuters on January 19, 2020. (Courtesy of Yad Vashem Archives/Handout via REUTERS)

“We wanted to stay together. We held each other tight. It was snowing heavily and my mother gave me her black fur coat, so I must have looked older than I was,” Meron said.

She was singled out for labor. As they headed to the vehicles, an SS guard struck her down, separating her from her family.

“He put my brother and mother into the vehicle, shut it and off it drove. I didn't have time to say goodbye,” she recalled, her eyes filling with tears.

“I hoped we'd see each other later in the evening. What was I to think? That all those put in the vehicles were taken that evening to the gas chambers, to the crematorium? We knew nothing,” she said.

“The worst was when we heard the rumors … and then we knew the truth. We were told 'don't you see the smoke rising up?'”

Another Auschwitz survivor, Vera Grossman Kriegel, 81, said she was pained by the rise of anti-Semitism in recent years and feared that history might repeat itself.

“It can happen anywhere,” she said. “Hate is born of ignorance. No one is learning from the past, no one wants to learn.”

A Soviet military doctor examines Holocaust survivors after the liberation of the Nazi German death camp Auschwitz-Birkenau in Nazi-occupied Poland, in this undated handout picture obtained by Reuters on January 19, 2020. (Courtesy of Yad Vashem Archives/Handout via REUTERS)

Aged six, Vera and her twin sister were subjected to the pseudo-medical experiments of doctor Josef Mengele, who used prisoners at Auschwitz as research subjects, earning him the name “Angel of Death”.

Vera and her sister were two of the few children to survive his cruelty. She tells of how she was kept naked in a cage, given painful injections directly into her spine, and beaten if she cried as she saw many other children suffer and die.