“I see this and I’m proud I got to play a Marine, even if I’m not qualified to be a Marine, at this present time." 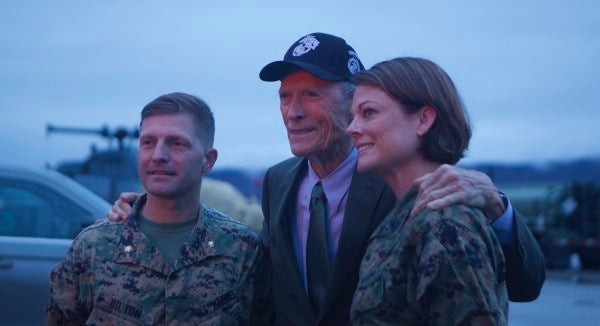 Ah, Heartbreak Ridge, the creme de la’ creme of moto-movies that gave us such gems as: “Recon platoon kicks butt!” and the tried-and-tested method of firing a bunch of AK rounds at your Marines and calling it a teachable moment.

In addition to generations of Marines who’ve watched Heartbreak Ridge and drunkenly belted out “Oorahs” and “Yuts” till they were hoarse — or the duty NCO came by to tell them to shut the fuck up — the 1980s military classic has another fan: the movie’s star, and director, Clint Eastwood.

“I see this and I’m proud I got to play a Marine, even if I’m not qualified to be a Marine, at this present time,” Eastwood said during a Dec. 7 visit to Marine Corps Base Camp Pendleton, Calif., where he filmed Heartbreak Ridge decades before.

And, while we’re all quick to point out that we’re one team, one fight, yadda, yadda, it’s hard to suppress the joy Marines feel when they hear a former soldier say the Marine Corps is one of their favorite branches. We know what he really meant. (Kidding, please don’t barrage this writer with hate mail.)

“It’s always been a favorite,” said Eastwood, who was drafted into the Army during the Korean War. “I remember — I was raised on World War II — and whenever they did movies that would come out based on the Marine Corps, I was always right there. Always excited.”

Eastwood was visiting the base to preview a screening of his upcoming film Richard Jewell, which tells the true story of an American security guard at the 1996 Summer Olympics who saved hundreds of lives from a bomb plot, but was ultimately accused by the authorities, and blasted by the press, over allegations that he planted the bombs himself. Jewell was eventually cleared of all charges.