The Defense Department may be cracking down on unusual banners within the ranks, but at least one guided missile destroyer seems intent on letting its freak flag fly 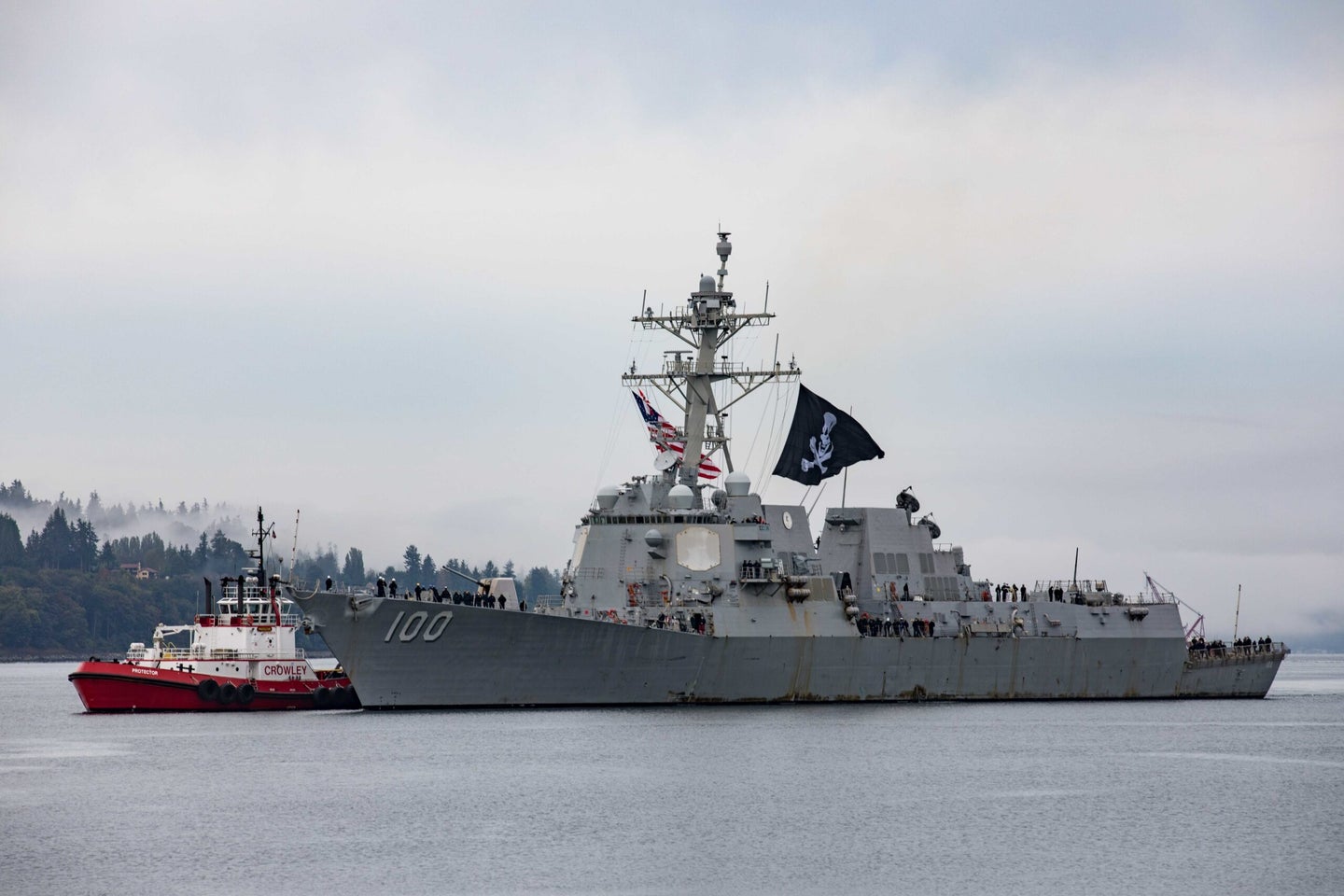 The Defense Department may be cracking down on unusual banners within the ranks, but at least one guided missile destroyer seems intent on letting its freak flag fly.

First spotted by our eagle-eye friends at The War Zone, the USS Kidd recently returned to its homeport at Naval Station Everett north of Seattle, Washington sporting a Jolly Roger following a deployment to the 4th Fleet area of operations.

The Kidd had deployed with embarked detachments from the “Wolf Pack” of Helicopter Maritime Strike Squadron 75 (HSM 75) and the Coast Guard Law Enforcement Detachment (LEDET) closer to Venezuela in April 2020 as part of a beefed-up U.S. counternarcotics presence in the southern hemisphere, according to the Navy.

According to The War Zone, the flying of the Jolly Rodger stretches back to the 17th century and was traditionally displayed “at the conclusion of a deployment generally reflects some kind of notable achievement.” Indeed, the skull and crossbones has been a fixture on modern naval lore since World War I when a British submarine hoisted the pirate banner following the sinking of a German battlecruiser, according to the Washington Post.

It’s unclear what action, if any, warranted the flying of the Jolly Roger: According to the Navy, the Kidd’s embarked sailors and Coasties were responsible for the recovery of 805 kilograms of suspected cocaine worth over an estimated $30 million, as well as rendering assistance to at least one fishing vessel in distress. The Kidd also experienced a major COVID-19 outbreak during its deployment, one of at least 25 warships to deal with cases of the infectious diseases in recent months.

“This deployment has been extremely challenging, but Kidd set the standard for operational mission execution and readiness”, Kidd commanding officer Cmdr. Nathan Wemett said in a statement. “I thank all the Sailors and U.S. Coast Guardsmen who overcame many obstacles in order to carry out our mission.”

At the same time, the Kidd itself has a unique relationships with the Jolly Roger that extends far beyond its traditional use as a naval commemoration of sorts. As The War Zone notes, the original USS Kidd — a Fletcher-class destroyer named for posthumous Medal of Honor recipient and former USS Arizona captain Rear Admiral Isaac Kidd — adopted Captain William Kidd, a Scottish sailor executed for piracy in 1701, as its mascot:

“The crew of the [first] Kidd … had also painted the famed buccaneer’s image high on the forward smokestack,” according to a 2013 edition of the official newsletter of the current USS Kidd. “Not wishing to dishonor the ship’s namesake, however, the crew obtained permission from Mrs. Inez Kidd, widow of RADM Kidd, first.”

As it turned out, Kidd’s nickname at the Naval Academy had been “Cap” in reference to Captain Kidd, as well. With help from Mrs. Kidd, the ship’s crew obtained formal permission to both have the Jolly Roger painted on the smokestack and fly the flag. “Subsequently, the Sailors of DD 661 were known to rescue downed aviators in the Pacific Ocean during World War II and return them to their aircraft carrier, for a hefty ransom of ice cream first of course,” the 2013 newsletter says. They also became known as the Pirates of the Pacific.

What makes the Kidd’s Jolly Roger even more unusual, however, is its presence just months after the Pentagon issued a memorandum restricting exactly which flags can be flown at U.S. military installations, an effective ban on the Confederate flag in the midst of a growing campaign to strip the symbols from bases across the country.

Related: It’s not just the Confederate flag: the Pentagon’s new ban may apply to the Jolly Roger

“Flags are powerful symbols, particularly in the military community for whom flags embody common mission, common histories, and the special timeless bond of warriors,” Defense Secretary Mark Esper wrote in the memo. “The flags we fly must accord with the military imperatives of good order and discipline, treating all our people with dignity and respect, and rejecting divisive symbols.”

As Task & Purpose reported at the time, the only flags now explicitly permissible at U.S. military installations include flags of U.S. states and territories; military service flags, general officer and Senate-confirmed civilian flags, and the POW/MIA flag, among others.

When asked if warships could still fly the Jolly Roger on returning from missions, Pentagon spokeswoman Lisa Lawrence told Task & Purpose at the time: “The memorandum does not authorize public display of unlisted flags in the Department of Defense.”

However, the Pentagon policy does allow services and units to fly “ceremonial” flags — which, given the Kidd’s relationship with the Jolly Roger, might prove a worthy exception to the DoD’s stated policy given the vessel’s grueling deployment.

Either way, we salute you, USS Kidd: It may not be the Captain America flag, but it’s still pretty damn badass.