No one can say the U.S military doesn’t rise to a challenge. When President Donald Trump said we need our... 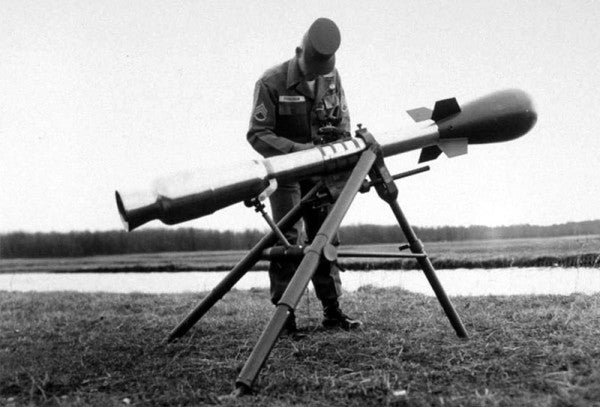 No one can say the U.S military doesn’t rise to a challenge. When President Donald Trump said we need our Navy to increase to 350 ships and submarines, and then slashed the shipbuilding and procurement budget, the Department of the Navy didn’t just roll over and call it impossible. They looked at the Vietnam-era ships we still had falling apart in drydock and formulated a plan. Ideas like reactivating the USS Kitty Hawk, an aircraft carrier built in the ‘50s that has the affectionate name of “Shitty Kitty.”

We don’t have to stop at just the Navy, though. There’s decades of fantastic gadgets the military has chucked to the wayside to make way for newer material — and some may have gotten the boot far too early.

1. The Davy Crockett: just a touch of nuclear war

Once upon a time, when atomic energy was shiny (glowing) and new, the American military was trying to figure out just how many more ways they could put a nuke on something and shoot it at bad people. The bombings of Hiroshima and Nagasaki had not put a damper on the desire for wanton destruction, but we needed something smaller and more effective for your average Joe on the ground who just wants to nuke the crap out of stuff.

Welcome to the M-28 Davy Crockett weapons system, a tactical nuclear recoilless rifle. Why fly a plane when you can toss your nuke delivery device into the back of a jeep and drive it onto the battlefield?

Uh… nothing. No, no, I wasn't saying anything, go ahead with… what you were doing.Wikimedia Commons

Firing range for these was up to 2.5 miles — far away enough to survive, but probably close enough to feel your teeth tingle and your sperm cells pop when the wave hit. These were primarily to be used against armor columns and had an explosive yield around 10 to 20 kilotons of TNT — less than any other nuclear munition, but with the added bonus of making the area inhospitable for humans. Keep that in mind when you’re wandering across your newly claimed battlefield after the artillery battery drops a baker’s dozen of these in front of you.

You may wonder why anyone in their right mind would get up close and personal with a small nuclear warhead like this. My father was an artillery soldier back in the 1960s and told me he trained to shoot the Davy Crockett. (Just dummy rounds, through. The old man still has all his hair and teeth).

I asked him why the hell he was learning to shoot low-yield tactical nukes on the battlefield, and he just shrugged his shoulders. “None of us knew the damn things were supposed to be nuclear!” he said. “They were just another artillery piece.” He was lucky in that, at least: Some soldiers who knew exactly what the hell they were walking into.

Remember this next time you complain about having to do a police call for cigarette butts.

2. Get the wind in our sails and bring back the USS Constitution

There will be changes made to the naval uniform, as well.Wikimedia Commons

The president said that we’re going to be going back to “Goddamned steam” during what I can only imagine was a conversation with an old Navy chief who doesn’t want to read the manual on the new aircraft-carrier catapults. Or the president secretly dresses up in top hats and goggles and waxes poetically about steam-powered dirigibles.

I’m a big fan of recycling and reusing, and if we’re going to bring back a warship that was built in the 1950s, we should consider all of our available options. We’re the most powerful Navy in the world by lightyears. We have so many aircraft carriers that we occasionally lose track of the damn things. If we need to boost the number of hulls in the water to satisfy yet another inspection, there are options all around us.

Try to keep up, whippersnappers.Wikimedia Commons

The USS Constitution has been sitting in Boston as a museum ship for decades, and it’s kind of insulting to do to one of the most powerful ships built. It was designed and built for war in 1794, not only to protect us against European super powers, but also to fight pirates which had been ravaging merchant ships. No matter how many pretty flags and American celebrations you have on it, deep down, the Constitution was built for one purpose: to be the deadliest ship in the water and turn all other predators into prey.

So grab those American-flag fidget spinners out of the gift shop and dump them into the Bay. Break the moorings, raise the sails (we know they work, after all), and let’s take Ironsides into the battle once again.

Hell, we can even use this ship of the line for its original purpose. You think speedboats full of Somali pirates will be any match for 44 mounted cannons? They’d probably be so surprised to see those full sails rounding the horn of Africa that there wouldn’t even be a fight — just a surrender to the captain, who will absolutely be wearing full naval dress regalia and sporting muttonchops so wide they can be seen from shore.

Nobody laughs at your dumb helmet when you carry five pounds of .45 ACP. (Pretty dumb helmet, though.)Wikimedia Commons

If you go to any military forum, you’re going to find a thousand threads on which guns are the best. You’ll hear about how the M-4 carbine is crap because troops are expected to clean them on a regular basis, especially when in a desert environment. Be sure to sound off in the comments on why I’m actually dumb and pout about the NJP you got for forgetting, again, to bring pipe cleaners to the field. (You know the armorer doesn't have them, just buy a damn pack for your squad. It’s like five bucks.)

Pictured: Something 99% of the military is apparently unaware exists.Wikimedia Commons

Somehow we got away from a great class of weapon known as the submachine gun. Specifically, the Thompson submachine gun, which wasn’t just used in 1930s gangster movies to fit into violin cases and gather protection money. The Thompson saw a lot of use in WWII, and proved an invaluable tool during street firefights across Europe due to its accuracy and the powerful .45 ACP cartridge. Fast and deadly, like a Marine. Or syphilis.

Pictured: one, possibly with the other.Wikimedia Commons

The smallest full-auto machine gun we have in our armament these days is the M249 SAW, which is fine. It can be used long-range or single-shot like any M4/M16, and in a pinch it can be mounted to the top of a vehicle or deployed as a crew-served weapon. It can also accept the same magazines as the M4s, meaning your weapon doesn't become useless if you run out of drums.

But is it cool like the Thompson? Does anyone call the SAW the “Chicago Typewriter” or “The Trench Broom”? No, they don’t.

“Uh, yeah, the President's Own has always had… violins…”Wikimedia Commons

And can you cleverly hide the M249 in a violin case, thus sneaking it past ISIS by posing to be a poor musician just trying to escape this harsh world to a better place? Just so you can whirl around, press the butt of the rifle into your pinstripe suited shoulder, clamp down on a toothpick, and deliver a “Yeah, see?” as you mow down the enemy?

Maybe you think looking cool while holding a weapon isn’t the point, but I can show you a thousand Facebook profiles that suggest Soldiers disagree.

This is one of those vehicles that I wouldn’t have believed existed if I wasn’t required to do preventive maintenance, checks, and services on it as a young private. We reservists don’t exactly get the latest and greatest in tactical vehicles. Imagine getting a Dodge truck in the ’70s or ’80s, but they strip out every comfort inside — including the AM/FM radio — and painted it green.

You didn’t take these things to war, you had them on base for loading and unloading heavy materials or just hauling things around on the trailer hitch.

Last time I had to move around tents and tent poles, we were given a couple of those two-seater Humvees with a truck bed in the back. I have yet to find a more useless design for on-post hauling than the tiny square of bed in the back of one of those damn things. So congrats to the military for killing something useful and replacing it with something frustrating and poorly designed.

The unfortunate thing is that all the old CUCVs disappeared before I could get new bumper stickers.

Everybody loves the guy who signs out the truck.Photoillustration

Sure, you can build an underground bunker in your backyard. But why go to all that trouble of pouring concrete and making sure you aren’t breaking into your septic tank when the U.S. government already has dozens of vacant missile silos and communications bunkers? There’s nothing better than owning a piece of Cold War history.

This is where the magic happens.Missilebases.com

Okay, so these bunkers are not weapons, exactly. But they cost millions of dollars to build back in the ’60s, and are being sold to private buyers at a fraction of the price. What do you do with an underground communications bunker? You deck it the hell out as a subterranean hippie commune/castle. From warheads to potheads.

As someone who’s spent my fair share of training exercises in WWII-era barracks that are slowly falling apart due to black mold, I feel these places can be retrofitted as training and proving grounds. Then when the day is done, you hunker down in a massive silo that once housed a nuclear missile aimed at the Kremlin. I’m sure they’re absolutely safe, and there’s no residual radioactivity from when high-yield atomic bombs were just hanging around.

Why are we letting civilians snap up these prime real estate deals and not using them as barracks for the influx of troops we'll need? Beats the hell out of the condemned 20th century barracks.