Before we move on to the topic at hand, I’d like to take this opportunity to apologize for a few... 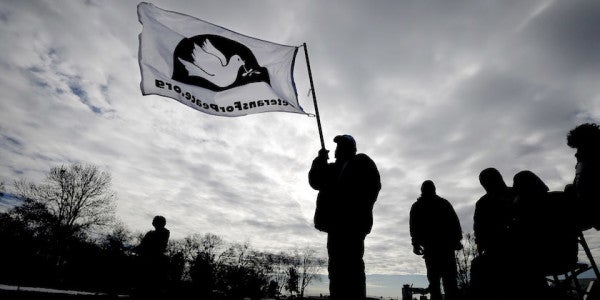 Before we move on to the topic at hand, I’d like to take this opportunity to apologize for a few things.

I’d also like to apologize to you, the reader, and the other 7.4 billion people on Earth for the untimely and tragic death of Kurt Cobain. Again, technically speaking, I had nothing to do with Cobain’s suicide. I was only 10 years old when it happened. But I was, and still am, a big fan of his music, and indeed many have speculated that it was the pressures of fame that ultimately drove the 27-year-old rock legend to end his own life. Kurt, if you’re listening, please accept my apology, too.

And what kind of person would I be if I didn’t apologize for Bieber? He thinks he’s sorry? Hell, I’m the one who should be sorry — sorry I didn’t travel back in time like Marty McFly and seduce his mother at a sock hop. I’ll carry that guilt for the rest of my life.

Okay, that’s it for now. I could go on for days. There are just so many things to be sorry for, and, as a veteran, the burden of regret I carry is heavier than that shouldered by a mere civilian. More than two centuries of pretty much continuous warfare have left me and everyone else who has ever served in the U.S. military with no shortage of things to apologize for: the mass slaughter of Native Americans, Dresden, the Mai Lai Massacre, and, recently, the death of 16 Afghan civilians at the hands of a rogue Army sergeant, just to name a few. All are undeniably terrible chapters in American history, with real, tragic consequences, and all are far more deserving than the close scrutiny typically reserved for the lives and misadventures of pop icons. Still, that’s a whole lot of guilt for a guy who spent six years in the Army to carry. Fortunately for me and my fellow vets, Veterans For Peace, a national organization made up of veterans and military family members, has taken it upon itself to check one more major box off that lengthy and terrible list.

The transgression occurred in 1945. In August of that year, American military pilots dropped two atomic bombs on the Japanese cities of Hiroshima and Nagasaki, killing hundreds of thousands of innocent civilians, leaving countless others sick and wounded, demoralizing the Japanese military, and effectively ending World War II. The scale of death and devastation that occurred within such a short window of time was on a scale unlike anything that had ever been seen before, or since.

The bombings and their aftermath have haunted U.S. military veterans like the radioactive carcass of a massive albatross for decades. But all that ended a few days ago. We all felt it. On Dec. 27, more than 70 years after the bombings, the anti-war activist group Veterans For Peace finally found the courage to apologize for the bombings — not only to the Japanese, but to “all the people of the world.”

“Veterans For Peace expresses our deepest condolences to all those who were killed and maimed, and to their families. We apologize to the Hibakusha, the survivors of the nuclear bombings, and we thank them for their courageous, continuing witness.

We apologize to all the Japanese people and to all the people of the world. This hugely atrocious crime against humanity should never have happened. As military veterans who have come to see the tragic futility of war, we promise that we will continue working for peace and disarmament. We want to see nuclear disarmament in our lifetime.”

The apology was included in a Veterans For Peace press release that has been circulating on a number of left-leaning blogs and websites. “This apology is in conjunction with a call to President Obama to also apologize to Prime Minister Shinzo Abe during his upcoming Pearl Harbor,” the press release explains. Whether the letter makes it onto Obama’s desk remains to be seen, but, according to common sense, it will not. And even if it did, Obama already had his opportunity to apologize for the bombings when he visited Japan in May.

“We come to Hiroshima to ponder the terrible forces unleashed in the not so distant past,” Obama said during the visit, expressing his condolences to the victims of the bombings and their families, while stopping short of apologizing for the bombings themselves. “We come to mourn the dead,” the president added.

Um, come to mourn the dead? No apology, Mr. President? Sure, I get it. In 1945, you were just a bunch of random particles floating around in space. But eventually those particles came together to form the sperm — and the egg — that became the fetus that became the baby that became the boy that became the man that became the leader of the very same country that 71 years ago decided (well, technically, “the country” didn’t make the decision, but, you know, a few of its leaders did) to drop the bombs that killed those people you didn’t apologize to.

Nonetheless, in the press release, Veterans for Peace praises Obama’s efforts. “It is an important though small step towards healing,” it states. “As military veterans who have trained for and/or fought in wars, we know that any step, even small ones, make a difference in efforts to reduce violence and death.” But the organization also suggests that, without a formal apology, true reconciliation between the United States and Japan, who already enjoy one of the most robust alliances of any two countries in the world, will never be possible:

“[We] know that the foundation for any true friendship is one of trust and accountability. Veterans For Peace calls on President Obama to publicly apologize for the use of nuclear weapons on Hiroshima and Nagasaki and to take responsibility for the horrific outcomes those bombs had on Japan.”

On Dec. 27, when Abe visited Pearl Harbor with the president of the United States at this side, Obama once again failed to seize the opportunity to apologize for the bombings of Hiroshima and Nagasaki. And while Abe offered “everlasting condolences” to everyone who was killed in the Japanese attack on Pearl Harbor and in the war that followed, he, too, refrained from apologizing for the attack itself. Instead, he noted, “We must never repeat the horrors of war again.”

That sentiment is one that pretty much any sane person can get behind. Had Abe’s words been accompanied by a formal apology, no matter how heartfelt, it’s difficult to imagine what that would’ve accomplished — aside from likely stirring up anti-American sentiment among his countrymen, in other words, the opposite of the intended effect. Meanwhile, the American service members who were stationed at Pearl Harbor on Dec. 7, 1941, were victims of an attack carried out by soldiers loyal to a cause that no longer exists. The Japan Abe represents is not the same Japan those soldiers fought and killed for, and an apology from him would have far less impact than an apology from the men who shed blood that day or their commanders.

Obama, too, is not really in a position to apologize for the bombings of Hiroshima and Nagasaki, nor is he in a position to “take responsibility for the horrific outcomes those bombs had on Japan.” As with Pearl Harbor, that responsibility belongs to those who ordered and carried out the attacks. And they already accepted it fully, as a necessary evil. For Obama to apologize on their behalf would be to publicly condemn the actions of men who, until their deaths, maintained that by nuking Japan they saved more lives than they took. Their fellow Americans seemed to agree: Several days after the bombings, the Japanese surrendered unconditionally, and celebrations erupted across the United States.

Which brings me back to the apology issued by Veterans For Peace. What good is an apology when it’s issued by a group of people who played no direct role in the actions they’re apologizing for? Perhaps a better question is this: Who benefits from such an apology? The answer is obvious: the people issuing the apology themselves. It’s a lame, empty, and self-serving gesture thinly disguised as meaningful action — apology for the sake of apology. There’s no shortage of problems in the world today, including the threat of nuclear proliferation. Apologies to the dead don’t disarm bombs.

Which is why, on reflection, I’m not sorry for Bieber. I’m not sorry for his baby blue eyes, or his silky-smooth dances moves, or even that time he famously wrote, “Hopefully she would have been a belieber,” in the guest book at the Anne Frank House. I had no role in his creation or his rise to fame, and therefore it’s not my place to apologize for it. I did, however, put the maddeningly catchy No. 1 hit song “Sorry” in your head, and for that I am profoundly…compunctious.