Sylvester Stallone Is Officially Returning For ‘Rambo 5,’ Because Nothing Is Over

You know what what America really needs right now? No, not new and bold war films based on the storied... 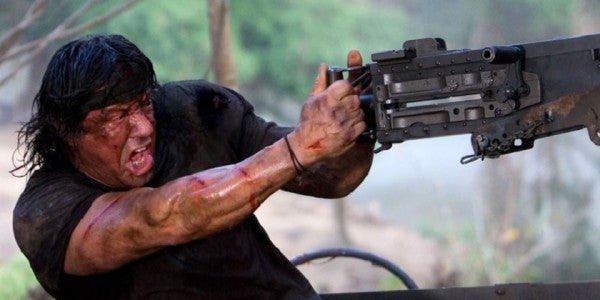 You know what what America really needs right now? No, not new and bold war films based on the storied battles of the Forever War. Nah, what we need is another blood-soaked, bulgy-veined rampage starring the action genre’s most iconic PTSD-addled veteran: John Rambo.

Thanks to Stallone’s inability to stop kicking ass on the silver screen (see: Expendables 1, 2, 3, and dare we say 4?), we’re finally going to get Rambo 5, according to an exclusive report from Hollywood chronicler Screen Daily.

Stallone is officially on board return as the titular super-soldier in the fifth installment of the 36-year-old blockbuster franchise, according to Screen Daily; although it’s unclear who will direct the next installment, production is expected to begin in September. But does does that really matter? It’s Rambo: we know what we’re going to get — even if this installment comes with a very modern plotline.

Here’s the basic premise of the film, according to Screen Daily: Our favorite aging Vietnam war hero has settled into pseudo-retirement, living on a ranch in Arizona and taking the odd job when and where he can until Maria, a long-time family friend, comes to him for help. Her grand-daughter has gone missing after traveling to Mexico for a party — and, because it’s Rambo, he goes right back to war, this time against agents of the country’s nefarious drug cartels.

There’ll probably be a lot of explosions, gratuitous and hyper-stylized action sequences, the kind you expect from The Expendables director and star. Personally, I’m hoping for at least one scene with the 71-year-old Vietnam vet hip-firing a M240 just to prove he can.

But it’s likely that we’ll get something new, too. With a decade between the latest installment and 2008’s Rambo, we can safely assume the new film will take a cue from recent trends in action flicks, like the heavy reliance on talented, predominantly veteran technical advisors whose expertise helps prevent some cringe worthy mistakes. Which means we hopefully won’t see anyone shoot a LAW from inside of a helicopter with a bunch of recently rescued prisoners directly within the backblast, or a gunfight where no-one ever reloads.

While another Rambo may seem a little bit gratuitous — even Stallone has gone back and forth over the idea no fewer than eight times — it’s not over ‘till it’s over. And in the words of John Rambo: “Nothing is over. Nothing!”