Rambo returns to kick ass, take names, and prove (once again) that ‘nothing is over’

Sylvester Stallone is back as John Rambo, and he's here to stab, beat, and shoot bad guys full of holes and pepper them with arrows in "​Rambo 5." 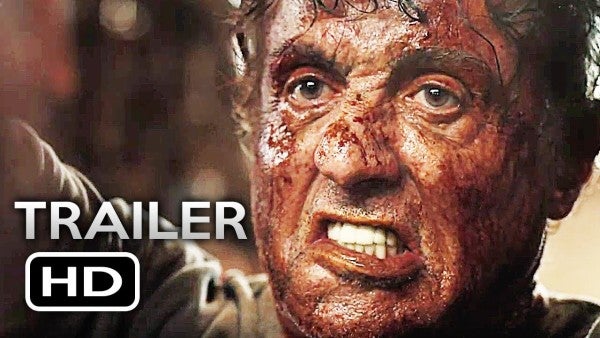 Yup, you read that right. Sylvester Stallone is back as John fucking Rambo, and he's here to beat, stab, and shoot bad guys full of holes and pepper them with arrows in Rambo5: Last Blood — and in the process, remind us just how far removed the franchise is from the original film, First Blood.

The 1982 action blockbuster First Blood is a tragic (albeit Hollywoodized) story of a decorated Vietnam veteran who struggled to cope with post-traumatic stress and a loss of identity after his service. Home from war, John Rambo travels to a small rural town in search of an old friend, only to find that he passed away. The townsfolk are apathetic and distant, and the town sheriff is outright hostile. To them, Rambo is little more than a weapon of war — a tool that doesn't belong in civilized society. The film ends with an acknowledgement that war sometimes stays with the warrior when Stallone delivers the iconic line: “Nothing is over.”

Turns out, neither is this franchise.

Next came Rambo 2, 3, and 4, which were action flicks, through and through. Gone was the thoughtful reflection on service and sacrifice, interwoven with the action and violence of the first movie. Instead it was just all-caps RAMBO and his physics defying mayhem, again, and again, and again. Based on the May 30 teaser trailer for Rambo 5, the latest installment in the 37-year-old franchise, which premieres later this year, it might end up being more of the same.

Directed by Adrian Grunberg, Rambo 5: Last Blood picks up with our aging war hero retired to a ranch in Arizona, where he takes the odd job here and there, and rides a horse because, well, it's Arizona. That's about all the trailer gives us in terms of story line — that and that a bunch of bad guys get torn to ribbons because they wouldn't stay off his lawn. Wait, wrong guy. Honest mistake.

However, thanks to a Screendaily article from May 2018, we have some idea why Rambo returns to his never-ending war: A long-time friend asks for his help in finding her grand-daughter, who went missing somewhere in Mexico, presumably kidnapped by a bunch of nefarious drug cartel goons.

Now, none of this is to say Rambo 5 won't be entertaining. It will. It's Rambo after all.

Thanks to the 72-year-old actor's inability to stop wrecking house (see: Expendables 1, 2, 3, and soon 4), we'll once again see Stallone maim, maul, and mow down hordes of bad guys. It's also likely we'll some different kinds of action than the saga has given us before. Considering that more than a decade has passed since 2008's Rambo 4, we can assume that the newest flick will follow the lead of recent action blockbusters, which lean heavily on the expertise of military technical advisers — many of whom are vets themselves — to create action sequences that are entertaining to watch, without being so over the top that they're campy.

So, with some luck, this time we won't see anyone shoot a LAW from inside of a helicopter with a bunch of recently rescued prisoners directly within the back blast radius, or a gunfight where no-one ever reloads.