Jake Wood, the former Marine-turned CEO of Team Rubicon, just gave an inspiring speech that every American needs to watch,... 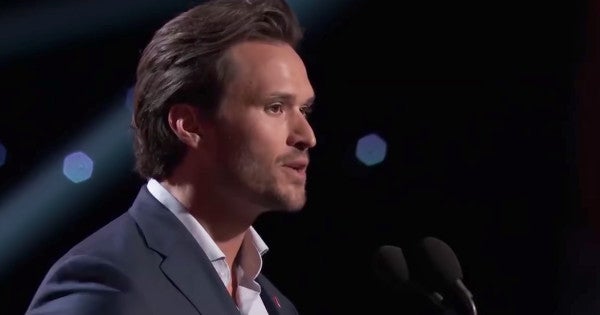 Jake Wood, the former Marine-turned CEO of Team Rubicon, just gave an inspiring speech that every American needs to watch, given how divisive our politics is these days.

“We have a saying at Team Rubicon: If Americans treated one another like they do after disasters, we'd live in a truly special place,” he said.

After accepting the Pat Tillman Award for Service at the 2018 ESPY's, the former infantryman talked about how Americans unite to help one another after floods, hurricanes, and tornadoes, but eventually fall back to their old habits.

Americans are willing to cross “the proverbial train tracks” to help people they never would have otherwise spoken with after a Category 5 hurricane, he said, “but why is it in the months following a storm we retreat back into our corners to dismiss the human beings that we've come to love just weeks prior?”

“We can do better, and we must do better,” he said.

Wood, who deployed to Iraq and Afghanistan during his four-year-enlistment in the Marines, co-founded Team Rubicon after the devastating 2010 earthquake in Haiti. Alongside co-founder and fellow Marine Will McNulty, he and six others rushed down to the island nation to offer medical assistance and expertise they had learned from the military.

Eight years later, that small group is now up to about 80,000 volunteers and staff, ready to deploy to other disaster zones.

You can watch the speech below (and also see a video about the story of Team Rubicon here):