6 Freaky Weapons That Came Out Of The Civil War

If there is anything that drives innovation in science and technology, it’s a good old-fashioned war. When you need to... 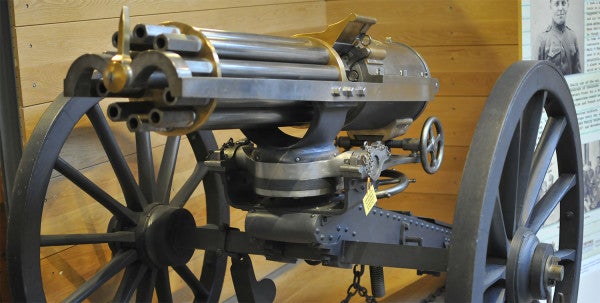 If there is anything that drives innovation in science and technology, it’s a good old-fashioned war. When you need to kill your enemies faster and deader than they kill you, governments are willing to try nearly anything, no matter how insane it sounds.

That isn’t to say we haven’t gotten amazing technology from war. Rockets, microwaves and radar were all game-changing innovations during battle, but also have turned into essential pieces of our everyday lives, helping humanity even when we aren’t smashing and destroying someone else for looking at us funny.

But while fighting Nazis happens to have also given us a new way to heat up a beef-and-bean burrito, every war has its hits, misses, and downright bat-guano ideas. The American Civil War is no exception. Here are a few examples of technological leaps, and tragicomic missteps, in military machinery during the United States' north-south skirmishes:

1. More bang for your buck: the Gatling gun

Repeating rifles were a big hit during the Civil War, especially for your front line troops who had to barrel-load their rifles every time they needed to get off a shot. American ingenuity has never shined more brightly than when trying to kill more people quickly and with less effort. And no gun of this era was deadlier than the Gatling gun.

The Gatling gun found its way to the front lines of the Civil War, but not because the American government saw them as a great leap forward in warfare technology that would change the battlefield forever. Instead, Union generals purchased them privately (hello, Second Amendment!) and dragged them to the front lines or attached them to naval ships. The Army didn’t officially adopt the gun until 1866. (It didn’t see much use in the Civil War, but was ubiquitous among federal troops in their brutal campaigns against the American Indians.)

Not only did they rain lead, but they confounded officers, too.Goodfreephotos.com

The Gatling gun technically isn’t the first fully automatic gun, as it required one person to turn a crank to shoot it, rather than using an auto triggering mechanism — though one can imagine there’s not much room for semantics when your platoon is getting mowed down with the Civil War version of an A-10 Warthog. They also were the first crew-served weapons, as later versions could be mounted on armored field carriages.

Eventually the Gatling Gun was replaced with lighter full-automatic weapons that didn’t need to be strapped to giant wheels and pulled with a draft horse.

2. Twice as nice: the double-barreled cannon

Sure, I know what you’re thinking: Double-barreled shotguns make sense, so why not a cannon? Unfortunately, it’s not as easy as that. The idea here isn't to have two shots before reloading. The inventor wanted to shoot two cannonballs that had a length of chain connecting them so as to “mow down the enemy somewhat as a scythe cuts wheat.”

Only one was ever produced, and even that one only saw use in battle one time. The three test firings at best cut down swaths of saplings and at worst, snapped the chain and killed a cow.

Sure, it couldn't hit much, but doesn't it look cool on display?Wikimedia Commons

To work properly, both barrels had to ignite and fire at the exact same time, which of course didn’t happen. After shaky success on the testing range and that single battlefield firing, at thousands of Union soldiers who weren’t actually there, the cannon disappeared for ten years. More than likely, some intrepid young field artillery officer chucked it in woods so he had an excuse to never use it again.

You may think of torpedoes as underwater rockets, but a hundred years ago, a torpedo was anything that exploded. And that includes this beautiful little hand grenade. No, trust us, it's a grenade.

The coal torpedo was a hollow iron casting, mottled and covered with coal dust and filled with explosives. Originally conceived by Capt. Thomas Courtenay of the Confederate Secret Service, these explosives were meant to be hidden in enemy coal piles for trains and steam ships. When shoveled into the boilers, the torpedoes would explode, destroying, killing and sinking anything they touched.

Without the coal torpedo, we might never have gotten the Mk 1 Mod 0 rat bomb.Wikimedia Commons

There is no telling how many ships were destroyed by these explosives. The Union Army discovered the plot by way of a captured rebel courier, but there are reports these bombs made their way onto more than one ship.

4. CSS Hunley: the first submarine to successfully sink a ship

It was a job with lots of ups and downs. Mostly downs, though.Wikimedia Commons

As you can imagine, submarines during the Civil War weren’t the sleek, Tomahawk-firing nuclear war machines we know and love today. Heck, they weren’t even fit for zany adventures with Kelsey Grammer.

The Confederate submarine CSS Hunley holds the distinction of being the very first submarine to take down a ship. Its tiny crew didn’t exactly have a way to shoot projectiles, so they had to get creative, placing a giant spear on the prow that was packed with explosives and ramming it into the side of an enemy ship.

This painting shows the Hunley in a rare configuration: not sunk.Wikimedia Commons

The Hunley had some rocky starts. While it worked fantastically during demonstrations, as soon as the Confederate military took command of it, they managed to sink it. Twice: Once by accidentally diving while the hatches were open, and once when it failed to surface. It killed 12 people before it was successfully used in war.

In the ship’s first and only attack, it rammed its spear into the USS Housatonic, which was part of a Naval blockade of Charleston, North Carolina. The Housatonic sank, killing five crewmen.

And then the CSS Hunley never returned to base. Because it sank for a third time, killing its crew once more.

5. The best of both worlds: the shotgun-pistol revolver

Get you a gun who can do both.Wikimedia Commons

The LeMat revolver was a curious invention from the 1850s, used by the Confederate army. Also known as the Grape Shot Revolver, the LeMat was a nine-round pistol with a buckshot shotgun barrel underneath the mail barrel, because why the hell not?

As you can imagine, there’s not much in the way of accuracy, but up close, the LeMat was deadly as hell. You could shoot a guy with a bullet and then follow up with buckshot for added insult to injury.

It was originally designed for mounted dragoon soldiers, and while effective, they suffered from design flaws that were never corrected — one of which was it was just too damned heavy. The pistol came in just under five pounds fully loaded. Since many soldiers preferred to carry multiple pistols rather than try to reload one during a battle, the LeMat was mostly pushed aside in favor of the much lighter Colt 1860.

Like the submarine, balloons in warfare led to bigger and better uses as technology progressed. We even still use balloons — like the Joint Land Attack Cruise Missile Defense Elevated Netted Sensor System, because you can’t slap a $175 million price tag on something and just call it a surveillance blimp.

The Civil War saw the first effective use of balloons for reconnaissance by tethering them to the ground and running telegraph wires up to the basket. There wasn’t much risk of being shot down, since aeronauts were well behind friendly lines and a Civil War-era rifle could hardly hit a person on the ground effectively, let alone an airship.

The balloon corps were a rousing success and were used from 1861-1863 — though, under-appreciated by the military at the time, the balloonists weren’t given ranks in the military themselves. They were treated as little more than showmen, and only survived as long as they did because generals had their asses on the line. It wasn’t until 1893 that the military developed an official balloon corps in Fort Riley, Kansas.