Army To Get Marine LAVs For The First Time

As the military’s smallest service, the Marine Corps is often the last to receive new gear — getting M4s and... 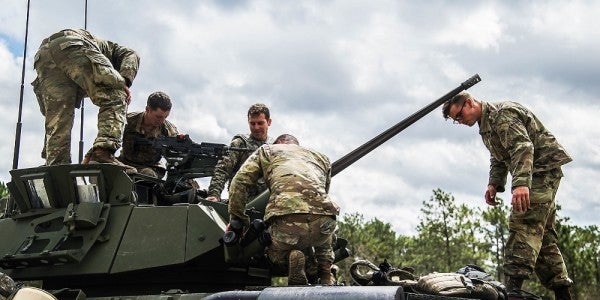 As the military’s smallest service, the Marine Corps is often the last to receive new gear — getting M4s and upgraded .50-cal machine guns years after the Army’s already had them in spades — leading to a sense that Marines get the other branches’ hand-me-downs.

Well, looks like it’s the Army’s turn. For what’s probably the first time in its history, the Army is looking to acquire modified Marine Light Armored Vehicles for air drop operations with the 82nd Airborne Division, according to Military Times.

The LAV popped up on the Army’s radar due to its potential for airborne operations. Compared to the Army’s Stryker infantry vehicle, the eight-wheeled LAV is lighter — between 31,000 to 38,000 pounds depending on the variant — and roughly four LAVs can fit into a C-17, compared to three Strykers. The LAV-25s being eyed by the Army require a three-person crew, carry six additional passengers, and boast a 25 mm gun.

Related: The Marines Are Eyeing A Badass Speedboat That Transforms Into A Spy Sub »

General Dynamics, which produces the LAVs, is currently modifying three of them to be air dropped, according to Military Times. Though the company successfully air dropped both Strykers and LAVs in the early 2000s, this is the first time any military client has asked for LAVs to be modified — the chassis need parachute-rigging attachments installed — for that mission.

The Army has shown interest in obtaining up to 60 LAV-25s from the Marine Corps, Barb Hamby, a spokesperson for Marine Corps Systems Command told Military Times.

With the Army poised to receive Marine Corps hand-me-downs — while the Corps scopes out a hybrid spy sub — this news sounds too good to be true. But, if the Army does decide to take a bunch of LAVs off the Marines’ hands, the soldiers with the 82nd may want to set aside some time to repaint the interior. There’s no telling how many dick drawings grace the inside of a Marine LAV.