The story of the ‘Davy Crockett,’ a nuclear recoilless rifle once fielded by the US Army

The radiation released by the warhead had a higher kill radius than the blast itself. 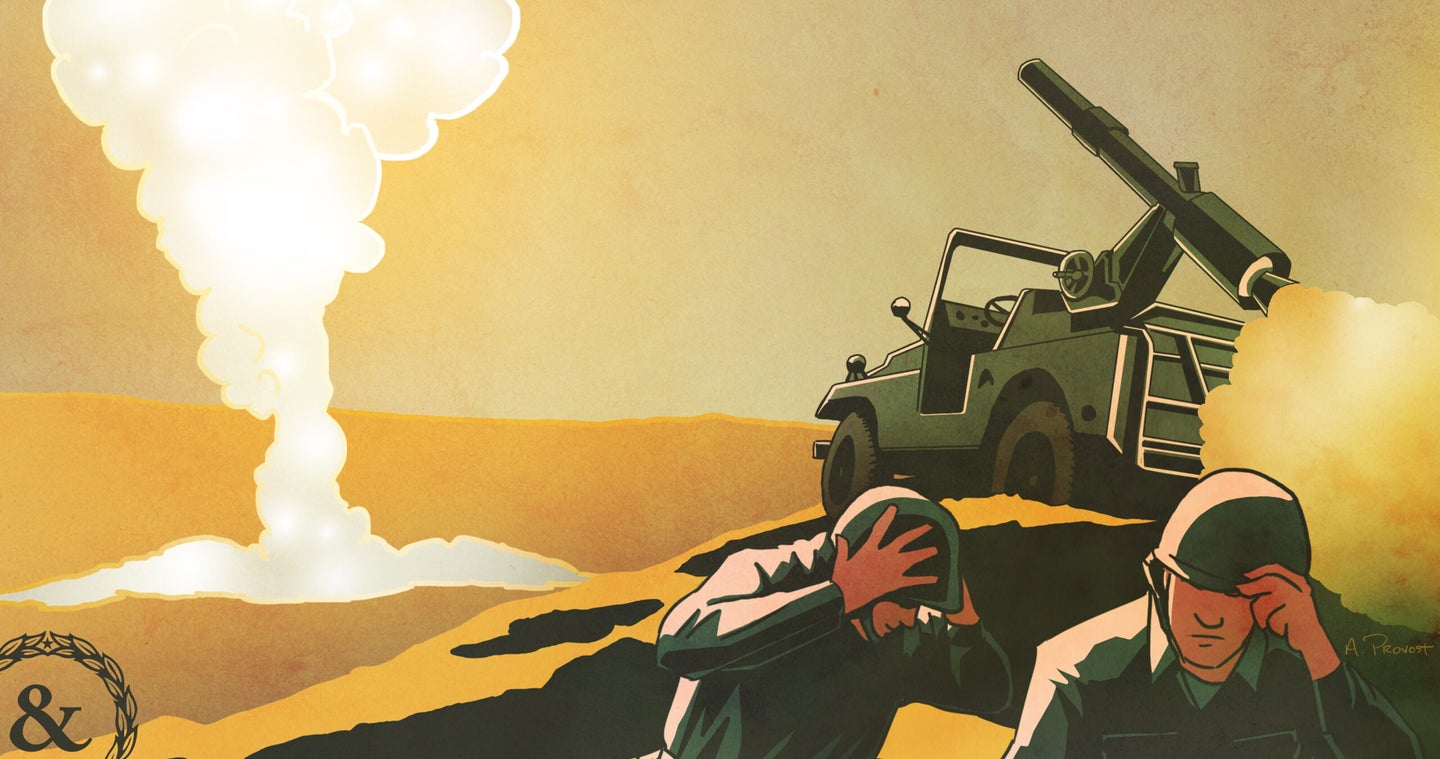 An illustration of the Davy Crockett, a recoilless rifle capable of lobbing a nuclear warhead. (Aaron Provost/Task & Purpose).
SHARE

For U.S. troops and veterans who have seen the movie Starship Troopers, one key takeaway – aside from the possibility that male and female recruits might shower together one day – is that infantry squads in the future will be equipped with crew-portable tactical nuclear weapons.

As it so happens, the Army actually fielded such a tactical nuclear weapon system during the Cold War. The “Davy Crockett” was a recoilless rifle that fired a nuclear warhead with a yield of between 0.01 and 0.02 kilotons – or roughly 10 to 20 tons of TNT.

Starting in 1961, the Army began fielding Davy Crockett weapons systems to infantry units in West Germany, Guam, Hawaii, Okinawa, and South Korea, according to the Army Historical Foundation. The Davy Crockett was operated by three soldiers and mounted on a jeep. The “light” M28 120mmm recoilless rifle had a range of 1.25 miles, and the “heavy” M29 155mm rifle could lob the nuke up to 2.5 miles away.

“While the Army never officially stated that the Davy Crockett would likely render the crew a fatal dose of radiation, it was known that there was a significant chance that would occur unless the crew was well shielded,” said Matthew Seelinger, chief historian for the Army Historical Foundation.

But even if the crew managed to protect itself from radioactive fallout, the Army’s concept of fighting on a nuclear battlefield was inherently flawed because if the United States or an adversary had ever used tactical nuclear weapons like the Davy Crockett in combat, the conflict would have likely escalated into a full nuclear war, Seelinger told Task & Purpose.

“Every Army officer I’ve ever worked with who served during that period, especially those in field artillery, said once the first nuclear round was fired, the conflict would immediately escalate beyond anyone’s control,” Seelinger said.

Nevertheless, from 1957 until 1963, the Army’s infantry and airborne divisions were reorganized into “pentomic” divisions that were intended to fight on nuclear battlefields.

The Davy Crockett was designed to be used against advancing formations of Soviet, Warsaw pact, and North Korean troops, allowing a small number of American service members to take out about a dozen enemy tanks, said former Army Capt. Dan Kaszeta, who served as an advisor to the White House on chemical, biological, and radiological weapons from 1996 to 2002.

While the warhead created a small nuclear explosion, the direct radiation released from the detonation had a higher kill radius than the blast itself. If the warhead exploded at an altitude of between 75 and 85 meters, anyone within a 400-meter radius of the blast would likely receive a fatal dose of radiation, said Kaszeta, an associate fellow with the Royal United Services Institute, a British security think tank in London.

“But the lethal dose will kill you over the course of a few days or a week, not right away,” Kaszeta told Task & Purpose.

Even though the Davy Crockett only had a range of up to 2.5 miles, firing the weapon would not have been a suicidal task for its crew, Kaszeta said. The explosion itself would have been very small; and setting the nuclear warhead for an airborne detonation would have minimized the level of radioactive fallout, he said.

“In an odd way, statistically, a claymore mine is more dangerous to its operators,” he added.

The Davy Crockett’s tenure ended up being as brief as the streak of a comet burning up in the atmosphere. The Army began withdrawing the weapons from service in the late 1960s because they were not accurate enough, according to Foreign Policy. The last Davy Crockett was retired in 1971.

To understand why the Army thought the Davy Crockett was a good idea in the first place, you have to understand the times in which it was conceived, said retired Army Col. David E. Johnson, an expert on military history, strategy, and doctrine with the RAND Corporation.

When President Dwight D. Eisenhower was in office from 1953 to 1961, he looked for ways to cut spending for conventional military forces as part of his efforts to manage the American economy, Johnson told Task & Purpose. To Eisenhower, expanding America’s nuclear arsenal was a much more cost-effective way to deter the Soviet Union.

“So, the Army’s in this position of: You gotta show relevance to survive,” Johnson said. “And the relevance is: How do you operate on a nuclear battlefield? This is where the pentomic division came from. These weapons started to be fielded because they seem to have utility.”

At the time, nuclear weapons were considered “almost magical” because they had just been introduced less than a decade earlier, said Johnson, who served as a field artillery officer in the 1970s and 1980s, during which he commanded a battery of 8-inch guns, which were capable of firing nuclear shells, and then served as the executive officer for a battalion of 155mm howitzers, which could fire both conventional and nuclear rounds.

Johnson said he does not believe the Army and military officials who embraced the Davy Crockett and other tactical nuclear weapons were acting maliciously. He noted that retired Army Maj. Robert Danford, who argued after World War II had started that the Army should continue to use horses to draw artillery instead of vehicles, honestly believed he was right.

“We look back and say: How could they have thought these things,” Johnson said. “Well, if you weren’t there at the time, you don’t have any empathy for the kinds of decisions these guys were making under stress.”

But the idea of limited nuclear war has not gone away entirely. In June, Congress voted to approve funding for a Nuclear-Armed Sea-Launched Cruise Missile, which would carry a low-yield warhead. Once again, U.S. military leaders are arguing that it’s possible that nuclear exchanges can be contained to kilotons before escalating to megatons.

But the Davy Crockett serves as a reminder that even the smallest nuclear weapon can set off a much bigger and likely apocalyptic war.