How weird can your patch get? 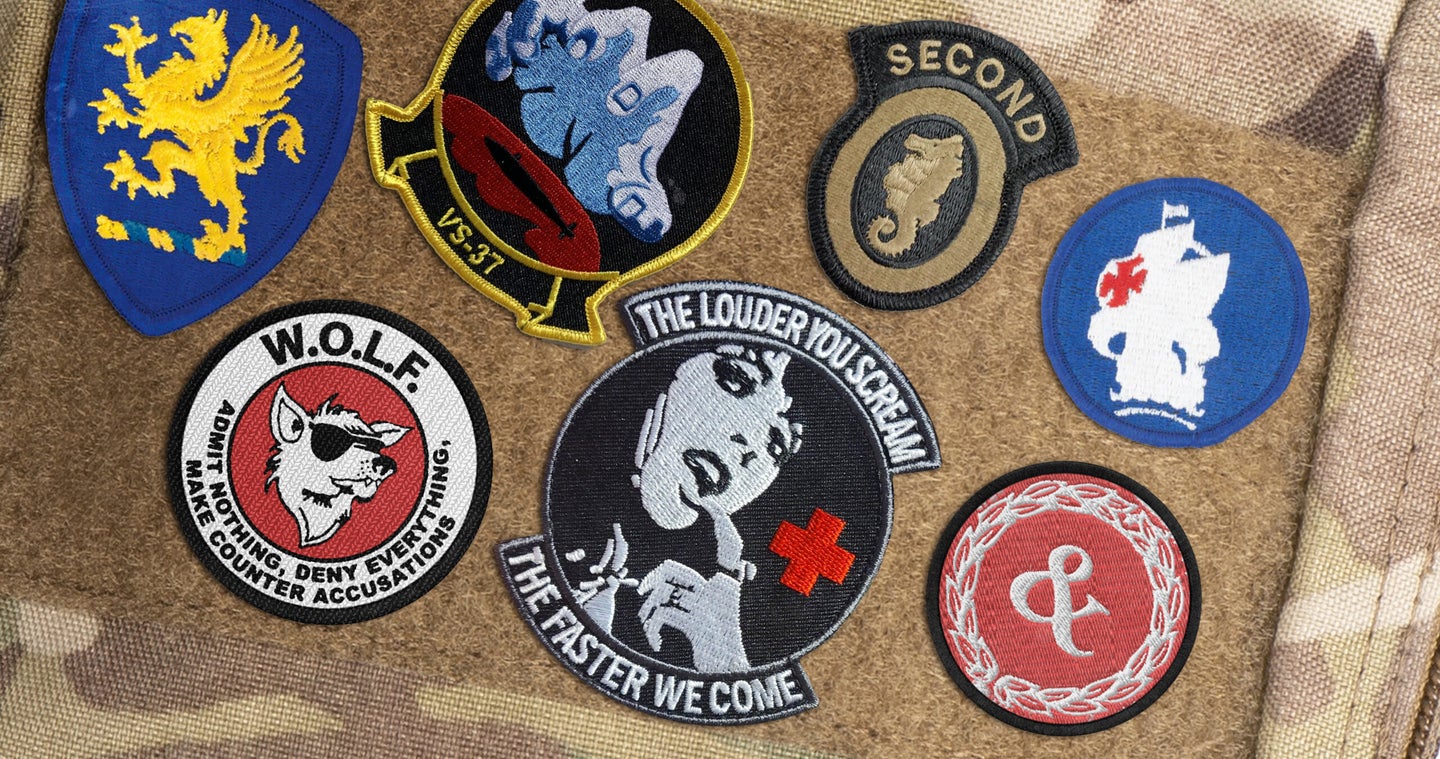 Patches. Unless you are in the Marines, you’re probably wearing some on your uniform or have them plastered across your kit right now. And with so many units, so many patches, there is plenty of room for creativity, interesting patterns, and the chance to get downright weird.

Oftentimes, patches — particularly unofficial ones — are generated by the servicemembers who will be wearing them, which gives them some extra flair. Those patches can reference pop culture, historical ties, or inside jokes. They’re also a way to signify that this Air Force weather squadron, or this Army infantry division is just a little different. Or, even if it’s really not any different at all, it’s still significant in some way because it’s the unit you’re in.

A patch can also tell a story. Wearing a combat patch on your right sleeve or an old unit patch on your flight suit is a signifier of what you’ve done, where you’ve been, or who else you’ve served with.

A couple of weeks ago we asked you, our readers, to show us some of the best and most absurd patches you’ve ever had the good fortune to encounter. Some were simple, but classic. While others may make you wonder, “why doesn’t my unit have a pegasus or a stallion on their unit patch?”

While some of the submitted patches were unofficial, all were  a testament to the creativity, camaraderie and occasional bouts of belligerence that comes with military service.

The Navy’s Electronic Attack Squadron 209 (VAQ-209) was established in 1977, the same year a little movie called Star Wars debuted in theaters. Reader Carl David Herron submitted their squadron insignia, which apparently for which they apparently received special permission from George Lucas to use Darth Vader’s likeness.

On Facebook, reader Chris Isleib submitted this unit patch for VS-37, a Navy anti-submarine squadron known as the “Sawbucks” that was decommissioned in 1995.

Submariners be advised to watch out for an ominous blue and silver hand loitering in the sky.

Not to be outdone, Andrew Massa submitted this squadron patch from the Navy’s Patrol Squadron 24.

Army patches tend to be a little more official, but as long as they’ve been around – and they go back more than 100 years to WWI – there have been some weird ones.

This is the U.S. Army South patch, submitted by Shanna Summy.

It may be a theater-level headquarters command, but who doesn’t want to wear a pirate ship on their sleeve?

It’s the 2nd Engineer Brigade, which was activated during WWII as an amphibious engineering regiment. What better symbol than a seahorse – one of the ocean’s most ungainly creatures – to signify the Army landing on beaches? Today, you can still see a seahorse on the unit patch of the 36th Engineer Brigade, headquartered out of a place that always makes you think of a beach, Fort Hood, Texas.

The National Guard may get plenty of shit, but it’s hard to argue with how badass this patch looks, submitted by Nicole Sellars.

This next one may be an unofficial patch, but how could it not make the list? Reader Juan Guzman submitted this emblem for the “Warrant Officer Liberation Front.”

This should be stitched on the back of every Warrant Officer’s patrol cap that mysteriously remains at his desk even though nobody has seen them all day.

There is also this unofficial Army patch, submitted by Justin Smith from his Security Force Assistance Team circa 2012 in Afghanistan.

“They chose the fabled, winged beast the gryphon. When they came to me with the name they spelled it ‘griffin.’  Not knowing what they were aiming for I assumed they meant griffin a la Peter Griffin,” wrote Smith.

“On May 20, 2012, our team was hit by a PBIED, killing two of the 12 members and seriously wounded a few more. Trying to build team cohesion after the attack, I decided to make individual patches for all the guys on my team. As such, my patch has my name and everyone else has their patch with their name. The guys were a little shocked when I passed them out as everyone was expecting the winged beast but instead got a foul mouthed cartoon character,” continued Smith.

While he apparently endured a stern reprimand, the patch lives on.

The Air Force may be the second-youngest branch, but they’ve got some truly cool and bizarre patches as well.

On Facebook, reader Rush Noble submitted this one, from the Air Force’s Thunderbirds demonstration team.

That is indeed a motto.

So, patches. Keep wearing them, keep designing them, and keep submitting them. Because they’re never going to get old.