"This is not an Army problem, this is an American problem." 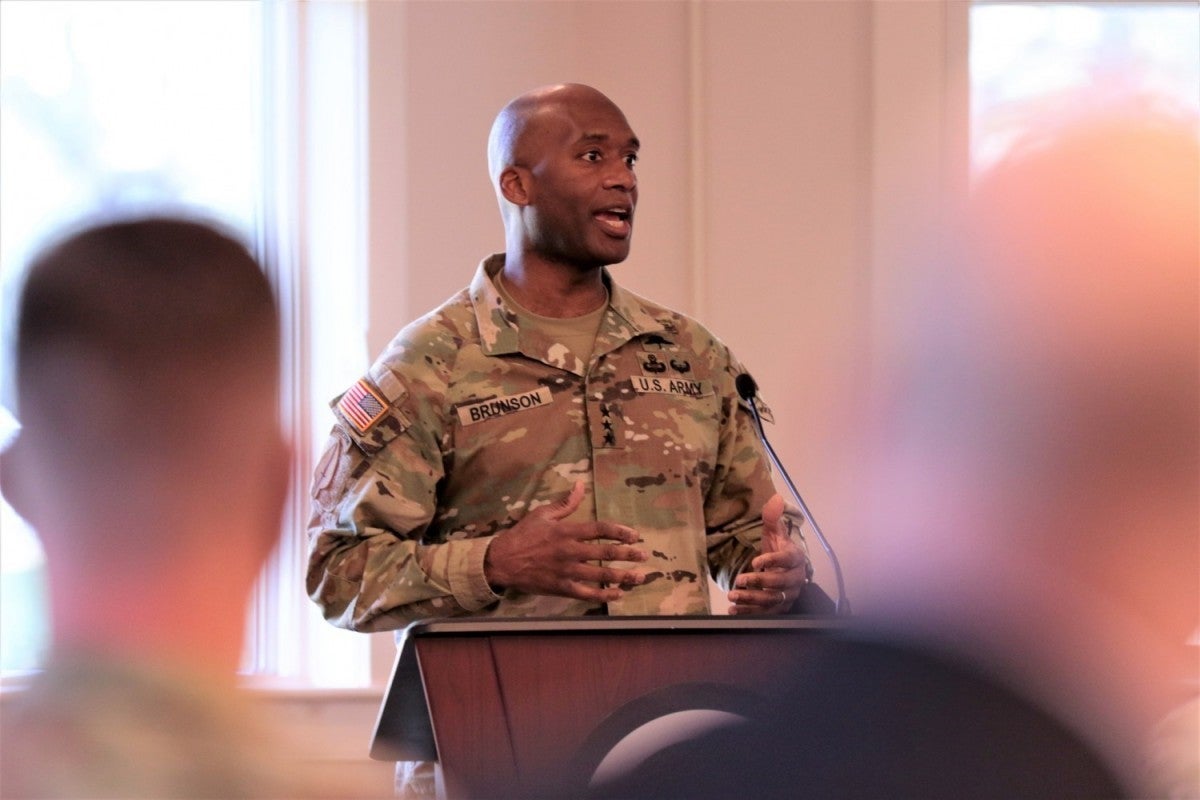 Lieutenant General Xavier Brunson, commanding general of I Corps, delivers commentary at the 2022 Civilian Hall of Fame ceremony at Joint Base Lewis-McChord.
SHARE

The Army’s recruiting troubles stem from Americans not being fit to serve or simply not interested in service, the head of the Army’s I Corps said this week. Lt. Gen. Xavier Brunson’s comments run contrary to what the secretary of the Army and the service’s chief of staff stated earlier this year when outlining efforts to combat this year’s poor recruitment numbers.

Brunson made the comments in an interview with The Spokesman Review in Washington State, where Brunson is also head of Joint Base Lewis-McChord.

In the interview, Brunson was primarily discussing how to reach younger Americans — his strategy involves “influencers” such as teachers and better messaging about Army benefits — but as part of outlining what needs to change, Brunson also was blunt in his criticisms about military-age Americans.

“Only 23% of the people that are of age to serve are actually qualified,” Brunson told the Spokesman Review. “This is now a condition. This is not an Army problem, so nationally what we have to look at is what’s going on with our youth.”

Brunson’s comments run counter to what Army Secretary Christine Wormuth and Chief of Staff Gen. James McConville wrote in a July memo, which stated the service has been unable to win the “war for talent” and find ways to make the Army more attractive to young Americans.

Although that memo pointed to some of the same challenges — declining interest, poor messaging on career and benefits from service, and potential recruits not quite physically or intellectually qualified for the Army — Wormuth and McConville said the responsibility is first and foremost with the Army.

“This is not a recruiter problem. This is an Army problem,” the memo said.

However, Brunson said the issues are wider than with the Army.

“Some of the challenges we have are obesity, we have pre-existing medical conditions, we have behavioral health problems, we have criminality, people with felonies, and we have drug use,” he said. “This is not an Army problem, this is an American problem.”

The criticism of younger Americans’ fitness isn’t unique. The Defense Department has made it clear that it worries Generation Z might not be physically capable of service, with their “brittle” bones not prepared for the strain of boot camp.

The Army, while not alone in its recruiting troubles, has been trying several strategies to try and make military service more appealing to potential soldiers. McConville has said the Army will not lower its recruiting standards, as it has done in the past, so instead it is launching a program to get potential soldiers trained and educated enough to meet those goals. The Future Soldiers Preparatory Course launched last month as a pilot program, and those in it will go through a 90-day training period.

Beyond the messaging Brunson advocates for, and the training the Army is hoping will help bolster numbers, the service branch is trying a classic tactic: money. The Army has set up multiple types of enlistment bonuses, including one as high as $50,000, for soldiers who will both join the military and deploy to basic training as soon as possible.