What movies or shows did you watch on deployment?

This is a safe space: Your terrible deployment movie and show choices will not be judged. 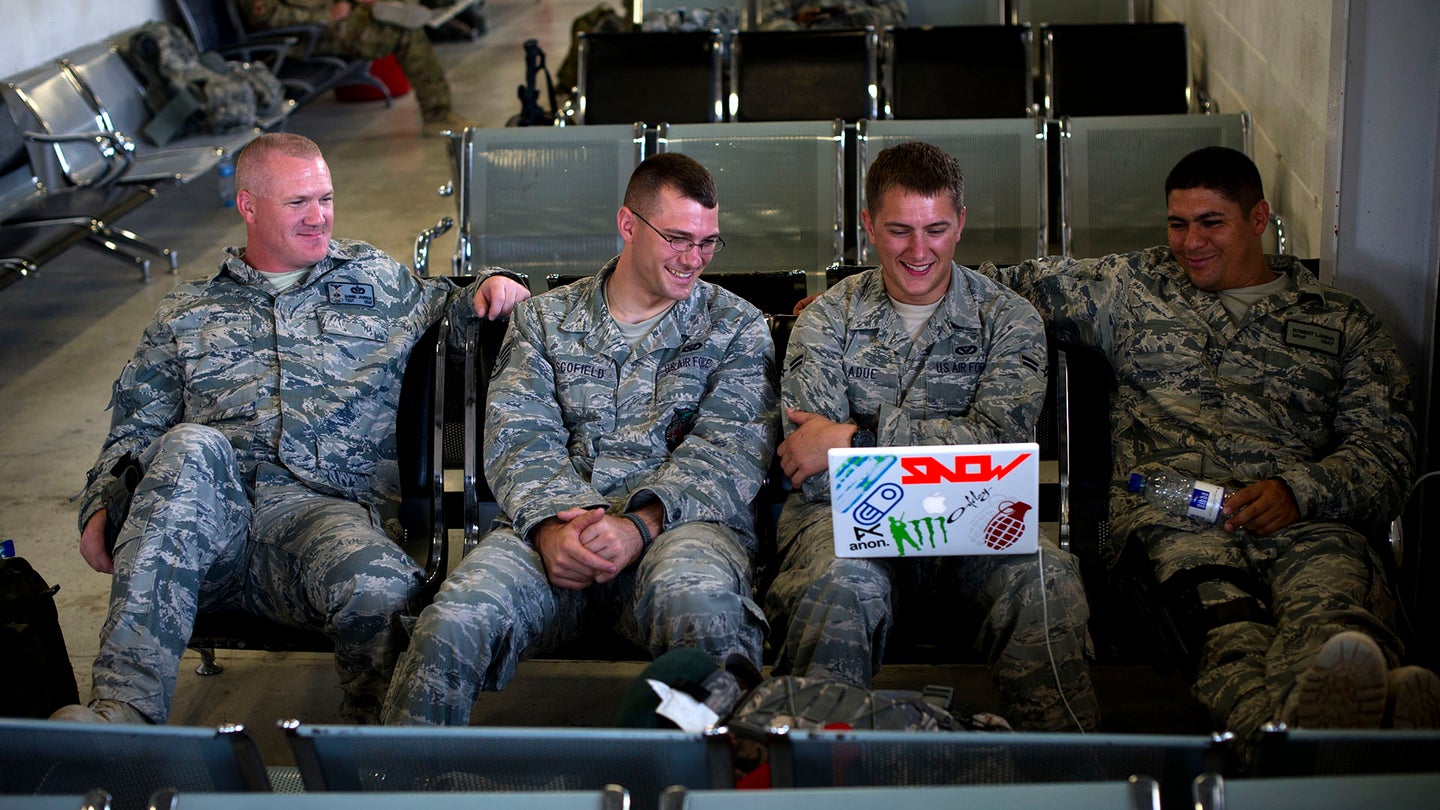 Firefighters with a quick strike team share in laughs as they watch a TV show in the Kandahar, Afghanistan passenger terminal, Aug. 11. The firefighters are part of a team, deployed to set up crass, fire and rescue at a bare base.
SHARE

There’s a lot that comes with being deployed in the military: You’re far away from home. You live in close quarters with the same group of people, to the point that you learn every single one of their tics, twitches, and tells, and come to both love and hate them for it. You’ll work harder than you ever have in your life. You’ll be more tired and stressed than you ever thought you could be, and you’ll push through it and realize you can do, and deal with, a lot more than you imagined.

You will also be incredibly bored. It’s not that there’s more downtime or dull hours during deployment, not necessarily. Instead, it’s almost like those hours stretch on longer. A full shift on post is an eternity, and even the breaks between watch and patrol sometimes seem to drag on and on. To stay sane, you have to find a way to fill that free time. For some, it’s by playing cards. Others tell stories and idly chat. For many, they kill time overseas in much the same way they would back in the states: By rotting their brains with trash television and whatever movies they can get their hands on from a friend’s hard drive, or by buying sketchy DVDs at the local market.

For me, I didn’t really have to deal with this until the second half of my first deployment to Helmand province, Afghanistan. I was attached to 1st Battalion, 6th Marine Regiment as a combat correspondent — my job was to tag along with infantry companies, and write short news blurbs and take photos so that the Corps’ public affairs apparatus could push those stories out to the world. During the first half of our deployment in early 2010, we’d taken the city of Marjah from the Taliban, and while it never fully quieted down, the mission changed during our last few months there, transitioning from an offensive push to building and providing security in the city. Our last few months were filled with security patrols, shuras, and a lot of manual labor as Marines across the area of operations got to work building up their positions so there’d be something for the next battalion coming in to relieve them.

We didn’t have much, at first. At what would later become Forward Operating Base Marjah, Marines slept in the open air on cots that sank into 1-foot-deep “moon dust,” until that had blown away or been ground down to hard earth. In terms of facilities, there was a deep trench filled with rocks — a piss pit. It had a sign that cautioned Marines there was no lifeguard on duty. Eventually, someone put up a solar shade over the cots, and a little bit after that, they built flooring on which to place tents, and then we moved into those. A few months before we headed back to the states, just as summer began to hit, we finally got power in the tents, and A/C soon after. (Showers and laundry came just a month or so before we left.)

I share all of this to set the scene: It was hot and dusty as all hell, with few creature comforts, even back at the FOB. What power Marines had for their computers and iPods they had to get from vehicles idling nearby or staged over in the motor pool, or from personally owned solar chargers. When we cleaned our clothes, it was by hand and with a lot of wasted water from bottles. Hair cuts were rare, and ass-chewings over one’s appearance were common.

So when I did sit down to watch something on my issued (and very old) Panasonic Toughbook, I wanted one thing: Escape. That’s why, for the last several months in Marjah, I binge-watched every single episode of Scrubs and Grey’s Anatomy that I could get my hands on. Look, I’m not even ashamed of this (even if I should be), and I’ll tell you why: Nothing could be further removed from my experience at that time than the plotlines in these two mid-2000s medical procedurals, one a comedy, the other an over-the-top soap opera masquerading as a drama. Here we all were, covered in dust, smelling like shit, looking even worse, and so, yes, during those hours of free time I chose to watch shows filled with beautiful perfect people, with impressive careers, nice homes, clean clothes, and their beautiful perfect people problems. Oh no, the classically handsome, talented, and well-paid neurosurgeon just broke up with his pretty and smart doctor girlfriend, just as his equally beautiful and brilliant surgeon ex-wife returned to the show? I can’t relate to this at all.

And that’s what I needed: Something I couldn’t relate to. I did not want to watch television or movies about exhausted and dirty Marines who survived on vacuum-sealed food, belligerence, and tobacco. That was reality. I needed an escape, and I got that, thanks to half-a-dozen seasons of Scrubs and a few of Grey’s Anatomy. (I also watched a pirated copy of Avatar six times, maybe more. It got so bad that “I see you” became an inside joke between a group of us on that deployment.)

So, that’s what got me through those long hours back in 2010. But I know I’m not alone. I know this because I remember looking around at what other Marines and sailors were watching and seeing a mix of movies and TV — for one it was True Blood, another it was Twilight — vampires were big back then, what can I say. I’m pretty sure one guy watched every single episode of the original X-Men animated series from when we were kids.

What I want to know is this: What shows and movies did you, our readers, watch on deployment? How did it help you escape and kill time, and what specifically were you were looking for? What was it about one show or another that kept you sane overseas?

Hop on into the comment section below and let us know.