An Inside Look At CBS’ New Show ‘SEAL Team’

When I saw the advertisements role out for CBS’s SEAL Team a few months ago, I could almost hear the... 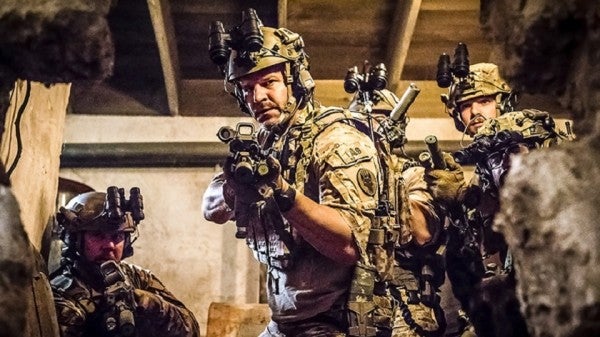 When I saw the advertisements role out for CBS’s SEAL Team a few months ago, I could almost hear the collective muttering of expletives under the breath of the entire veteran community. In recent years, much to the chagrin of the military community, both Hollywood and the publishing industry have embraced the stories of the elite sailors who served in the Navy’s SEAL teams, and inundated the public with tales of their exploits. Since 9/11, there have been at least 12 major motion pictures that featured Navy SEALs, not including History Channel's latest episodic SEAL Team Six drama, Six. It has left many of the nation’s veterans wondering if Hollywood, or the nation for that matter, cares about any military history other than that of the SEALs.

Even when regular military units are portrayed, the attention to detail required for an accurate depiction of war and military life is often times thrown aside in favor of taking potshots at politicians, or trying to capture some bullshit philosophy on what it’s like to serve. So what could CBS’s newest addition to its fall line up possibly do different than what the rest of Hollywood has already done?

“Simply, it’s doing everything different,” said Tyler Grey, a former Army Ranger who now works as a consulting producer on the show. I caught up with Grey in Studio City, California, at CBS’ Radford Studio Center, which is home for the SEAL Team production.

“A big thing is the word real. People always ask, ‘is this real?’” Grey said as we made our way down into the massive warehouse space that contains the show’s collection of sets. “No. It’s a TV show. It’s not real. It’s Hollywood. It’s not gonna look or feel real. But there's a difference between real and authentic. If we made a show that was real, it’d be a show about stirring shit in Afghanistan.”

I couldn’t help but think of Morgan Freeman holding up a finger and saying, “He’s right, you know.”

There were multiple sets that had been built, ranging from a shockingly accurate recreation of a C-17 cargo plane complete with ISUs strapped to the floor, to a military briefing room decorated with those cheap government office chairs. You know the ones: They’re short, black, and are almost never in good working order. There was even a mock up of a Middle Eastern compound that could fool anyone who has seen the real thing. Attention to detail is a military hallmark, and Grey wanted to bring that to the production. “On set, we’re going through every little detail that will probably never be seen. Just like the military, it’s all attention to detail.”

As we made our way over to the prop department, I asked how involved he and the other military advisors were in the production. Does he feel like his advice is being listened to? Grey recalled, when “Chris Chulack, the director of the pilot, said to me, ‘Look, I don’t care how small something is, and I don’t care what I’m doing. If you see something that you can make more authentic, tell me.’ Sure as shit, during the pilot, that’s what happened. Time and money was spent to make everything feel authentic.”

Down in the props department, a few guys were were busy setting up the kits for an upcoming scuba scene. One of Grey’s fellow advisors, a former Navy SEAL himself, was going through each kit with them, ensuring it was set up properly. Holding up a pair of massive fins, he said, “No one really likes using these anymore, but I still love them. They’re the best fins for OTB landings.” Admittedly, I was impressed. They had real ballistic plates, real ballistic helmets, and real night-vision devices.

After a quick drive off the studio lot in a production van, we arrived at a church a few blocks away where the day's scenes were taking place. One of Grey’s jobs is to be available on set for any last-minute corrections or advice, as needed. As one of only a few full-time producers with a special operations background, he’s constantly bouncing between the different departments every day. “We’re filming an episode every eight days, that’s basically a movie every eight days. There's no time for anything,” he said. “It’s a balancing act.”

On set, I was introduced to a few of the main characters. David Boreanaz, who you might recognize from his role as Seeley Booth on the hit show Bones, plays a senior SEAL named Jason Hayes. Max Thieriot, of Bates Motel fame, plays Clay Spenser, the new guy on the team. The first actor I spoke to on set was Neil Brown Jr. though. You may recognize him as DJ Yella in the hit movie Straight Outta Compton. He’s a gifted martial artist who has played military roles before, and now portrays Navy SEAL Ray on the show. Like the other main characters, he never served in the military, but said, “I was always the guy they grabbed in ROTC” when the recruiters came around.

ROTC may not exactly rate on the same level as service in SEAL Team Six, but Brown definitely looks the part.

Noticeably, none of the main actors are military veterans themselves. But Grey informed me the show has found some very creative ways to get veterans involved in the production. “The stunt coordinator, on the first day of the pilot, came up and asked, ‘hey do you have any guys that can fast rope?’ That never happens in Hollywood; stunt coordinators always use their own guys. I was like, ‘uh yeah,’ and put this team of guys together— a Ranger, two SEALs, a Force Recon guy, a guy from my old unit. It went great.”

While Grey is doing his best to bring authenticity to the show, not every recommendation can be accommodated because of a variety of production considerations that can’t be mitigated. “We’re trying to instill authenticity on a train that is moving 100 miles per hour in one direction,” he explained. “We give our input, and it can’t always be done, but it never falls on deaf ears. I’ve never seen people so willing to listen to the details on every level.”

As we sat in the chow line, which was an eerily familiar set up that reminded me of getting mermites delivered in the field, Grey addressed my (and many veterans) concerns over the show not consulting the Department of Defense. “People are gonna criticize regardless, but if we did have DoD involved, they would have final say.” He went on to say that if they had to bend to the will of the DoD, then they would be hammered with criticism about being military propaganda, which is a fair assessment. At some point, even as veterans, we have to admit that the government doesn’t have eminent domain over everything dealing with the military.

But writing a show about a unit so small, so closed off to the public can present many other challenges. “The show isn’t being made for just that team, we’re focusing on universal themes. It’s not just sacrifice and honor,” Grey said, bringing up two usual suspects in the list of common military tropes. “With a TV show, you can show how multiple deployments affect a guy over time, or affects his family. Those things aren’t unique to a SEAL team; that’s the whole military.”

Grey went on to say, “The show is called SEAL Team, but that’s just what we’re using to deliver these universal military themes.” A curious approach, but one that is accurate. Making it into a special operations unit doesn’t mean you don’t go through the same trials and tribulations that the rest of the military faces. Nearly everyone who has worn a uniform knows what it’s like to deal with failed marriages, feel estranged from their kids, or go through withdrawal symptoms after a deployment. “Whether you agree with it or not, the Navy has out-marketed every other branch. The public knows what it knows, and right now it knows SEALs. So we’re using that as a conduit to talk about much bigger, universal military themes.”

That might be exactly what America needs in the midst of an ever-growing civilian-military divide that is often talked about but has not yet been resolved. CBS is one of the largest networks in the world, drawing in an average 12.62 million viewers per episode of programming. If you are trying to deliver a message or create awareness, it’s hard to find a better platform to do so. Grey agreed, saying, “It’s on a major network, which allows us to reach a lot of people. To help more people, you have to reach more people.”

I don’t know what the final product is going to look like; I’ll be watching with the rest of America when it premieres. I do know that if Grey and the rest of the production are any indication, then this show will be worth keeping up with. America desperately needs to have some sort of connection with what the military community goes through. Since 1980, America’s veteran population has decreased by half. Wars on three fronts, responding to humanitarian disasters, and a looming shadow from many adversaries make that connection even more imperative.

As Grey, who was wounded during combat in Iraq and carries the scars to prove it to this day says, “Life is war. It’s a constant fight against factors that are generally out of your control, and you have to constantly fight back. It never ends, and it will go on until you die. That’s life.”