The shower scene is the most important part of ‘Starship Troopers,’ and not for the obvious reasons

There’s something dark being hinted at amidst all the suds and space soldier stories. 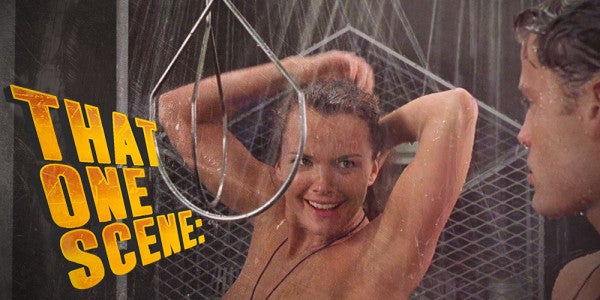 What's really being discussed in the shower scene from "Starship Troopers?".
SHARE

It’s been 21 years since we watched Johnny Rico evolve from wide-eyes civilian dissecting space-faring insects in his high school science class to Mobile Infantry trainee, sand later, a seasoned roughneck. But there’s one scene from director Paul Verhoeven’s 1997 cinematic interpretation of Robert Heinlein’s 1959 military sci-fi classic Starship Troopers that remains iconic not for what we see, but for what most of us missed.

In the span of two soapy minutes, the infamous shower scene from Starship Troopers gave us a glossy, vivid 90s-style depiction of men and women in an infantry unit living, training, eating, sleeping, and yes, bathing together. The moment is playful, flirty and yet transgressively light. The movie premiered at a time before nudity was mainstream, and the scene was so radical that Verhoeven agreed to strip down for filming to put the cast at ease. It often gets head nods as a progressive depiction of service, mostly due to its debut nearly two decades before the U.S. military integrated combat arms.

But like the recruiting adverts for “why the Mobile Infantry is right for you,” the scene quickly takes a dystopian turn when one of the recruits explains that she’s “going in for politics … You gotta be a citizen for that, so here I am.” Another remarks that she enlisted because “I wanna have babies. It’s a lot easier to get a licence if you’ve served.”

That “the nudity might even be part of the movie’s illusion: a way of getting you to focus on everything besides the point” is a theory Entertainment Weekly explored in a 20-year anniversary breakdown of the sci-fi space opera’s shower scene. Tucked in between the generic lures of military service are the red flags that their world is deeply flawed. This is not a huge shocker if you’ve been paying even attention to the “service guarantees citizenship” mantra in the recurring propaganda newsreels, but it’s in this scene that the movie makes it clear exactly what military service entitles you to: political agency and the right to have a family.

Take a moment to let that sink in: Every aspect of their life is controlled by the state. Then consider that in the Mobile Infantry, they’ve got leisurely shower time, bed-mounted TVs in the barracks, and a glimmer of freedom, not to mention all those sweet MI benefits they can collect at the end of their service, like babies and a seat on a city council. In the campy future-world of Starship Troopers, there are no screaming drill instructors ordering Mobile Infantry recruits to scrub their nasty bodies on a countdown as they clamour, three or four to a shower head, to soap and rinse, before sprinting to change over for whatever grueling ordeal comes next. But, like all totalitarian “utopias”, what lies beneath is far more sinister.