When it comes to gun safety in the home, there are smart ways to protect your loved ones and then... 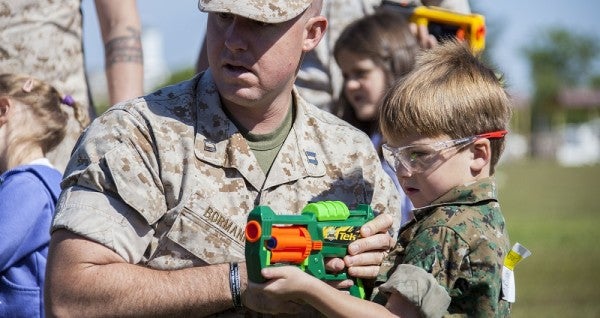 When it comes to gun safety in the home, there are smart ways to protect your loved ones and then are other ways that are less so. If your go-to weapon for home-defense is a .44 Magnum that you keep in your bedside table, you might want to rethink that. Know your target and what lies beyond it, right? If you’re trying to stop a bad guy from doing you harm, you can probably get the job done by using a smaller caliber weapon. You really don’t need a hand cannon that can punch through walls.

That being said, it’s less about the firearm and more about the individual who uses it.

Task & Purpose sat down with Skylar Gerrond, an Air Force security forces veteran with experience in law enforcement, for some tips on smart home-defense safety.

Gerrond served as a security forces officer for seven years before leaving the service in 2007 as a captain. He and Matt Barido, a long-time friend from his time in the Air Force, are the founding members of Veri-Fire and together they created the Guardian, a biometric lock for handguns.

During his time in the Air Force, Gerrond provided nuclear security for intercontinental ballistic missiles — which are nukes for those not in the know — for two years. He then served two and a half years in Germany doing traditional law enforcement, what Gerrond jokingly called “Hill Street Blues” work. Afterward, he went to San Antonio, Texas, where he worked on rapid prototyping for deployed personnel at the Force Protection Battlelab, which is where he got his start in defense development.

In particular, we asked Gerrond to help us lay out how gun owners can safely have a handgun in the home for self-defense when they have kids.

When Gerrond’s eldest son was 4 years old, he had to start thinking about gun safety in a way that he didn’t have to when it was just him and his wife, he said, adding that this instance was the genesis for the Guardian biometric lock.

“When they hit that age — 3, 4 years old — I started asking how am I going to store my handgun?” said Gerrond, who has two sons, ages 10 and 7. If a child walks into the room where you keep your handgun — let’s say, the bedroom — is there really a place you can put it where they won’t find it?

As of 2009, there were an estimated 113 million handguns in the United States, according to a 2012 report on gun control legislation by the Congressional Research Service.

To be useful for self-defense, the firearm needs to be readily accessible, but secure so you don’t have to worry about your children, or one of their friends, getting their hands on it. For gun owners with multiple firearms, many store them in a locked safe, which prevents accidental use.

But when considering self-defense, where is that happy medium between safety and efficiency?

Lock your ammunition and firearm away separately.

The safest way to store a handgun is to have the weapon locked away in one location, with the ammunition securely stored elsewhere, said Gerrond. And here’s where it becomes challenging, because when it comes to personal protection, that just isn’t practical.

“The problem there is obvious, said Gerrond. “It’s one of those things where there’s a little bit of, I’m not going to say hypocrisy, but there’s this underlying tension between the way that you keep a handgun completely safe and having a handgun in a home-defense scenario.”

If you’re responding to a threat in your home, fumbling with a key, a combination, or a keypad lock, and then making your way to your dresser or cabinet to retrieve your ammunition, it kind of defeats the purpose of having a handgun for self-defense.

“Everybody loves to think that would never happen, but if you own a gun for home defense, you need to be ready to use it for that scenario,” Gerrond said.

Of course you could keep both the weapon and ammunition in the same lockbox, but there’s the chance that might not be safe enough if a determined individual, or curious child, manages to get the key and open it, or if you forget to fully lock and secure the container.

Teaching weapons safety to your kids isn’t enough on its own.

There’s really no reason not to teach weapons safety if you have a gun in the home, but that might not be enough.

“The problem that we see if there are a lot of people that convince themselves ‘that I can store a gun in a place that my kids won’t find it,’ or ‘I’ll teach my kids about guns and it will take the mystery out of them and they’ll know what to do and they won’t ever handle my gun,’” said Gerrond.

However, there are studies, and tragically, news stories, that have shown that might not be enough.

“Most kids will play with them and most kids will pull the trigger,” he said, adding that “I’d lay it out as risk versus reward. Let’s entertain the possibility, even it’s remote, even if it’s minor, let’s consider this one-tenth of a 1% chance, what are the consequences of that?”

If you feel that keeping your handgun and ammunition locked away in separate locations limits your reaction time during a crisis situation, and you’re concerned that having a firearm that’s easily accessible isn’t safe enough, then there are other options.

Use biometric locks to allow for ease of access, while preventing accidental use.

This is where new technology, like biometric lockboxes and Veri-Fire’s Guardian lock come in. A biometric lock box allows you to store your handgun and ammo in a place that only you could access.

Alternatively, Veri-Fire’s Guardian is designed to be a permanent attachment, locking directly onto a handgun, underneath the barrel and in front of the trigger and trigger guard. The lock has a spring-loaded metal frame that slides over the trigger, making it inaccessible to anyone who doesn’t have their index fingerprint registered with the technology. The fingerprint is stored on the gun, not online, and the lock can have five separate users, meaning that the weapon isn’t left inert and useless if its principal owner happens to be out of town when it’s needed most.

The fingerprint scanner is located right where your index finger naturally rests when properly holding a handgun, and can be made for left or right-handed users. It also has a six-month to one-year battery life and warns the user when it’s running low on juice.

If a gun owner is serious about safety and self-defense, then it’s a good idea to have multiple safeguards. Technology and gear will always come in second to personal responsibility, explained Gerrond, and using Guardian doesn’t mean that a gun owner should suddenly forget common-sense and start leaving his or her handgun around the house.

Watch a video demonstration of the Veri-Fire’s Guardian lock below, or visit their IndieGoGo campaign here.