If the opening sequence of "Saving Private Ryan" captured the carnage of the most successful large-scale amphibious assault in history, it's 2014 military science fiction yarn "Edge Of Tomorrow" that reveals its modern shortfalls. 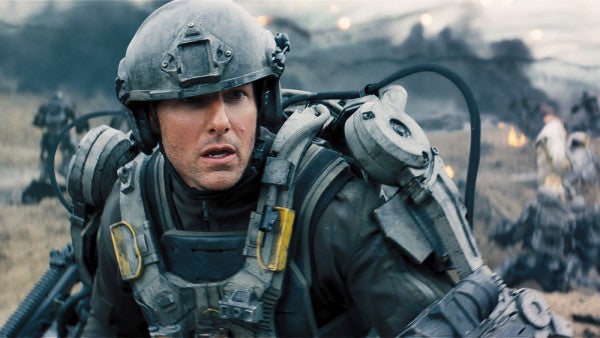 As military weaponry has advanced, the viability of amphibious assault against a defended beachhead isn't what it used to be. Unlike World War II and the Korean War, modern defenses are bristling with guided missile systems, thermobaric weaponry, and radar-guided machine gun batteries, among other lethal armaments. If the opening sequence of Saving Private Ryan captured the carnage of the most successful large-scale amphibious assault in history, it's 2014 military science fiction yarn Live. Die. Repeat. that reveals its modern shortfalls.

In Live. Die. Repeat. — also known as Edge Of Tomorrow and based on the amazingly-named book All You Need Is Kill — the United States leads a near-future multinational force in an invasion an unexpectedly well-defended beach in France, an assault led by an attack force consisting of bloodthirsty Marines in powered armor and every other murder-machine in the U.S. arsenal. But despite the advanced combat gear aside, the invasion goes so poorly that Tom Cruise literally has to go back in time t0 stop it— over and over and over again.

For context: Live. Die. Repeat. Centers itself around a public affairs officer played by Cruise, who manages to piss off the Supreme Allied Commander of the impending invasion into occupied France like any good PAO who's only out for his own neck. As punishment, he's reduced to the rank of private and tacked onto an ornery infantry squad for the upcoming beach party. The invasion takes place by air and sea, with futuristic C-130 sized tiltrotor aircraft based on the Bell Boeing Quad TiltRotor being the main method of inserting exoskeleton wearing troops onto the contested beaches.

The scenes of war and destruction in Live. Die. Repeat. are a surprisingly more visceral lesson on the perils inherent to a modern amphibious assault than, say, reading a dry 60-page report by the Naval War College on the same subject. The last major amphibious assault was in Korea at Incheon back in 1951, and since then, the United States has only really threatened an amphibious assault during the first Gulf War in 1991. The following year, Marines actually landed in Somalia during the dark morning hours only to be greeted by lights and cameras of American media outlets and a poorly-armed resistance. Imagining how an invasion against a well-prepared, modern enemy is much easier when you have a Hollywood budget of $178 million to throw at the problem.

Here's how the invasion plays out.

During the initial sea-air invasion, enemy fire is far more accurate than anticipated, and troops coming ashore are taken down by both missiles and artillery fire

Chaos rules the day as the invasion force makes for the beach.Warner Bros

The amphibious assault starts to go to shit as air support seems to be useless and the command structure has devolved to the squad level. The resulting operational paralysis kills any forward momentum.

Even Emily Blunt and her helicopter sword can't fix this catastrophe.Warner Bros

Special Forces are ineffective and taken out of the game before they even have a chance to perform behind-the-beachhead missions.

Special Forces make a less than ideal landing onto the beach.Warner Bros

The beachhead crumbles. The force never makes it off the beach, and the invasion fails every-time

There goes the beachheadWarner Bros

Look the fact that its aliens who drive the invasion back into the sea don't really matter in this context, regardless of how the maneuverability and lethality of their individual warfighters are presented on screen: in their defense of the beachhead, they could represent literally any advanced army. The moments of chaos that are seen in the film show tilt-rotor aircraft blotting out of the sky, troops getting mowed down as they work across crater filled beaches, and special forces soldiers, so useful in the war on terror, decimated by a numerically superior and technologically equal enemy force.

Yes, Emily Blunt and Tom Cruise eventually win the day, but they do so through a pin-point special operations strike against an enemy command center far behind the beach — and with the help of both advanced ISR (read: precognition) and the support of the misfit roughnecks of J Squad, the unsung hero grunts of the film. Hopefully, amphibious assaults remain an academic exercise, because the reality of storming an occupied Baltic state defended by Russian missiles, aircraft, and tanks just seem like a slaughter waiting to happen.

A enlisted thinktank brought to you by Task & Purpo