Secretary of Defense James Mattis may be the hardest working man in the federal government at the moment. Between juggling... 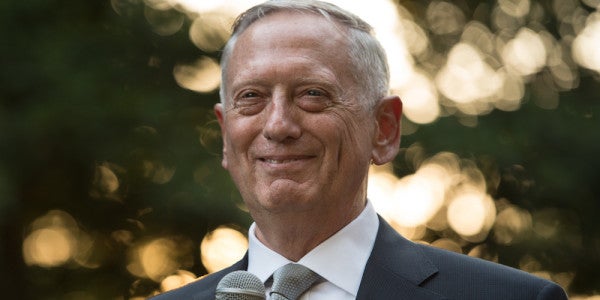 Secretary of Defense James Mattis may be the hardest working man in the federal government at the moment. Between juggling the ever-changing orders from his boss on joint military exercises with South Korea and assisting the Department of Homeland Security with its current migrant issues, the former Marine Corps general still finds ways to stay humble amid the chaos that is his day job. So it's no surprise that, every once in a while, the Warrior Monk of Washington needs a good, stiff drink.

Case in point: Mattis' recent appearance at this year's commencement for the Naval War College on June 15th, the same weekend he also delivered a lengthy address at the U.S. Merchant Marine Academy graduation. After opening with a few signature laughs (“any day outside Washington, D.C., is a sunny day for me,” he joked), Mattis struggled to clear this throat.

When finally offered a bottle of water by a sympathetic official, he quipped, “if this was vodka, it'd be a lot better speech.”

Ever the consummate role model, Mattis turned his joke into a teachable moment. “I’m not supposed to glamorize alcohol anymore,” he said. “So you young folks, you ignore what I just said.”

You heard the man. Read the full transcript of Mattis' remarks here and the entire speech below: