It’s not the first time a space-based U.S. military branch has been discussed — or debated, and lampooned — but... 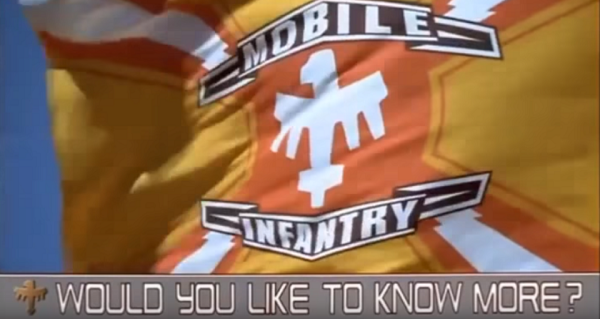 It’s not the first time a space-based U.S. military branch has been discussed — or debated, and lampooned — but as of Monday morning, it’s now official: the Space Force will be the sixth branch of the U.S. armed forces.

“When it comes to defending America, it is not enough merely to have an American presence in space; we must have American dominance in space,” President Donald Trump said Monday at a White House National Space Council meeting. “I am hereby directing the Department of Defense and Pentagon to immediately begin the process necessary to establish a Space Force as the sixth branch of the armed forces.”

It certainly is, but first things first: What the hell is the recruiting slogan going to be? Glad you asked, because we have some thoughts on that.

Is the Mobile Infantry right for you?

Don’t get too excited about the prospect of a space-based military branch, especially if you’re junior enlisted. Even if the military started basing troops in space — which they probably won’t because, lol — every E-4 and below would spend the work-day bunny hopping about in zero-gs with a laser rake picking up space trash, that or re-painting moon rocks.

“Nuke it from orbit, it’s the only way to be sure.”

Let’s be honest: You’re only excited about the prospect of a Space Force — which really should have been a Space Corps, but whatever — because it’ll breathe new life into those long-dead dreams of deploying with the Colonial Marines to LV-426 for a bug-hunt.

This is less a slogan and more of a serious question that actually requires an answer. As Task & Purpose’s Jeff Schogol reports, at this time the only official word from the Pentagon has come from Marine Gen. Joseph Dunford, chairman of the Joint Chiefs of Staff, who upon hearing the announcement remarked “We got it sir,” which pretty much amounts to: “Lol, okay.”

Say what you will about the necessity of a sixth branch — there’s a real recruiting opportunity here! Just think: if there was a Space Corps (I’m not letting this go), DoD could just turn to the plethora of pulpy sci-fi space operas already out there. Half of the ad campaigns are already made and ready to go:

“Because jumping out of a perfectly good airplane isn’t hardcore enough.”

Join the Space Force: we’re like the airborne, but better, because we’re in space. To be fair, the idea of a deploying troops across the globe via drop-pod is objectively badass, and it’s provided ample fodder for sci-fi games for years. Then again, those in the Space Force might end up being the only troops likely to earn a higher disability rating from the VA for knee and back pain than the airborne.

“Welcome to the Space Force: Here’s your reflective belt.”

Oh, what, you thought the bullshit rules and regulations that came with the Global War on Terror would only apply to those operating on the globe? Not so fast, Buck Rogers: you can’t blast off ‘till you have proper eye and ear pro, and goddammit, why is there a rip in the crotch of your space trousers?

“We’re worried what grunts will do if we ever achieve world peace.”

Honestly, this is a fair concern. Better take to the stars to find new and intelligent life, and kill it.