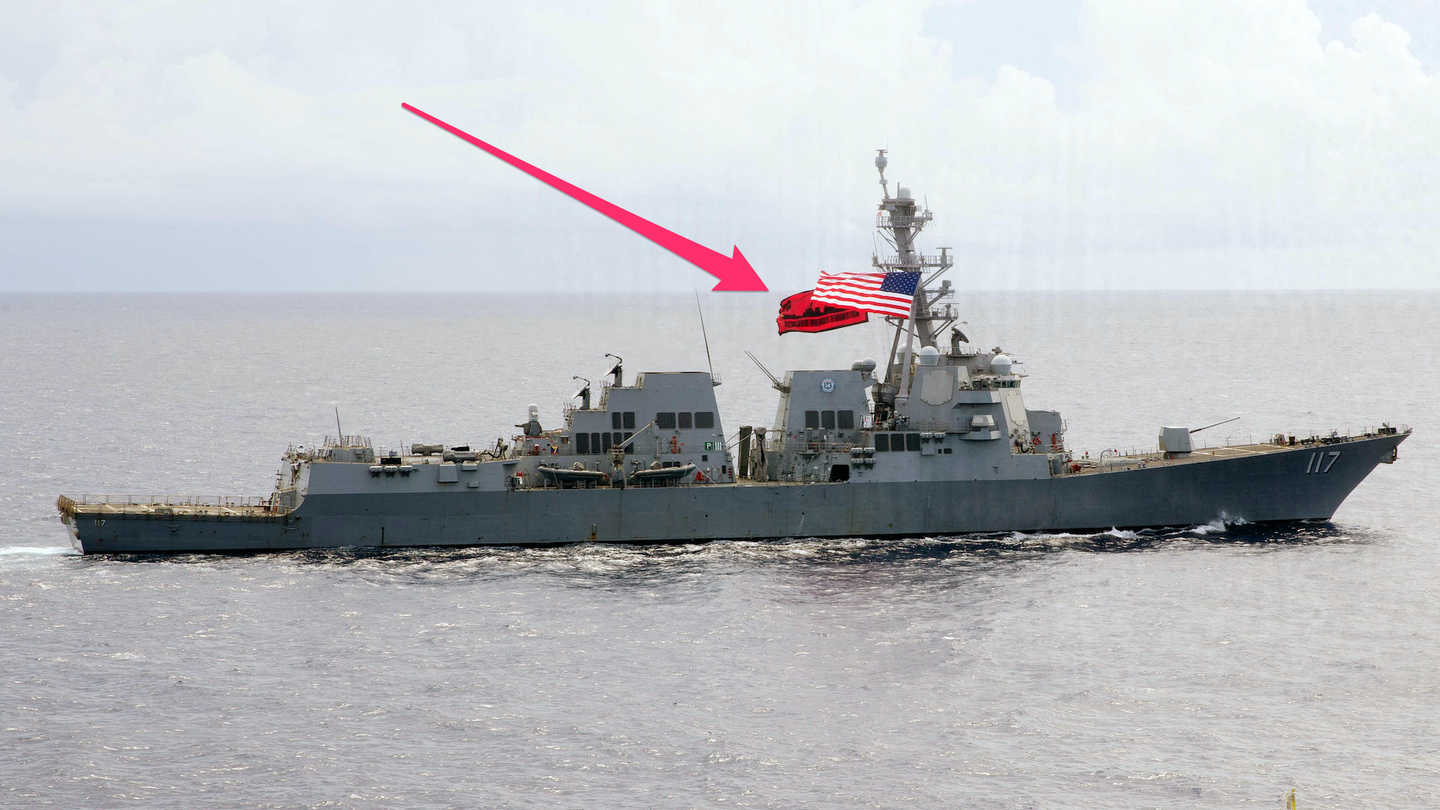 As any regular reader of Task & Purpose knows, we have a soft spot for Navy battle flags, whether they’re steeped in history like the USS Paul Hamilton’s ‘Moultrie Flag’ or just belligerently awesome like the USS Kidd’s Jolly Roger. So when we spotted a brand new banner festooning one of the Navy’s newest vessels, we had to stop and take notice.

A search of the Defense Visual Information Distribution System (DVIDS) reveals that the Ignatius has been flying the battle flag — which features a black silhouette of the destroyer with the motto ‘ALWAYS READY FIGHT ON’ in black letters on a red field — as far back as May of this year.

Prior to participating in the Ford shock trials, the Paul Ignatius spent the intervening months operating in the Atlantic Ocean in support of the U.S. 6th Fleet’s “full spectrum of joint and naval operations, often in concert with allied, joint, and inter-agency, partners, in order to advance U.S. national interests and security and stability in Europe and Africa,” according to the Navy.

It’s unclear low how exactly the Ignatius has been flying its new battle flag or what the exact origin of the design is. Public affairs officials for the destroyer did not immediately respond to a request for additional information from Task & Purpose.

Commissioned at Port Everglades in Fort Lauderdale, Florida just over two years ago, the destroyer is named for former Secretary of the Navy (and World War II lieutenant) Paul Ignatius, who served under President Lyndon Johnson during the height of the Vietnam War.

“What could be greater than serving aboard a Unites States destroyer,” Ignatius himself said of the new destroyer during its commissioning ceremony, according to the Navy. “Destroyers have an honorable role in Navy history because of their many capabilities.”

Ignatius’ short time with the Navy has been marred by problems with those capabilities. According to an annual report from the Navy’s Board of Inspection and Survey (INSURV) released in March, the destroyer “scored the lowest acceptance trial and final contract trial scores in the decades-long history of the Arleigh Burke-class destroyer program,” as Maritime Executive put it at the time.

Indeed, the report noted that the Ignatius suffered from “significant deficiencies affecting her ballistic missile defense capabilities, main battery gun, main propulsion systems, and aviation hatch watertight integrity,” so far that ongoing equipment failures were a major source of interference during trials and demonstrations of the new destroyer.

Then again, the Ignatius appears to have overcome some of those initial problems: In late May, the destroyer successfully fired two Standard Missile-3 (SM-3) interceptors to engage ballistic missile targets in what the Navy called a “groundbreaking cooperative engagement” with the Royal Netherlands Navy during the At-Sea-Demo/Formidable Shield 2021 exercise

“The Royal Netherlands Navy’s HNLMS De Zeven Provincien employed its advanced combat system suite to provide an early warning ballistic track to the maritime task group,” the Navy said. “Upon receipt of this track information, Paul Ignatius was able to calculate a firing solution to launch an SM-3 Blk IA and negate the threat.”

The intercepts “are kinetic, effectively hitting a bullet with a bullet at hypersonic speed in space,” as the Navy described the intercept at the time.

It’s unclear if the Ignatius was flying its new flag at the time of the intercept. Either way, the red-and-black banner appears to be a worthy addition to the Navy’s growing ecosystem of colorful battle flags.