10 Missing, 5 Injured After Navy Destroyer Collides With Oil And Chemical Tanker Near Singapore

The USS John S. McCain, an Arleigh-Burke class guided-missile destroyer, collided with a merchant tanker east of the Strait of... 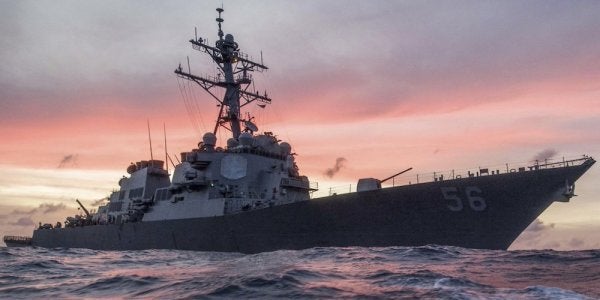 The USS John S. McCain, an Arleigh-Burke class guided-missile destroyer, collided with a merchant tanker east of the Strait of Malacca while headed to Singapore for a routine port visit on the morning of Aug 21., the U.S. 7th Fleet announced in a statement.

The U.S. Navy told the Associated Press that 10 sailors are missing and five injured after the McCain “sustained damage to her port side aft” during the incident, which occurred around 6:24 am local time.

Seach-and-rescue operations are currently underway in conjunction with Singapore naval vessels. The Navy has deployed an Osprey aircraft and Seahawk rescue helicopters from the USS America to assist local tugboats and coast guard vessels.

The extent of the flooding from early reports is nowhere near the level of Fitzgerald. Good comms, making way slow but sure.

A full accounting of the crew is underway, which will be slower than usual because the crew is engaged in fighting flooding.

The other vessel involved in the collision was identified by the 7th fleet as the Alnic MC, currently listed as a Liberian-flagged oil and chemical tanker en route to Singapore from the Port of Pyeongtaek-Dangjin in South Korea.

As Larter points out, the 30,000 gross tonnage Alcin MC is significantly larger than the McCain's roughly 9,600 fully loaded.

The news of the collision comes almost exactly two months after the USS Fitzgerald, another Arleigh-Burke class destroyer, collided with the Philippine-flagged merchant ship ACX Crystal off the coast of Japan on June 17.

On Aug. 17, the 7th Fleet announced that the Fitzgerald's commanding officer, executive officer and command master chief had been relieved of duty for the “avoidable” incident that left seven sailors dead.

This is a developing story and will be updated with more information as it becomes available.