The US May Be Rushing Into A Messy New Campaign Against ISIS In The Philippines, Report Says

The Department of Defense is currently considering targeted airstrikes against ISIS militants in the Philippines as part of a named... 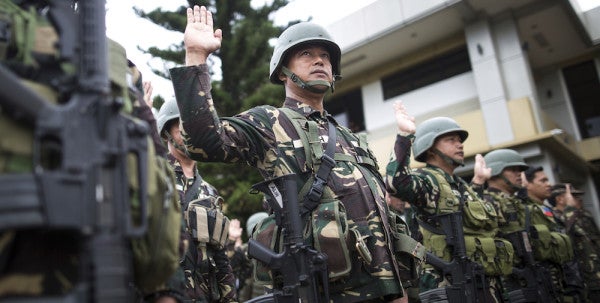 The Department of Defense is currently considering targeted airstrikes against ISIS militants in the Philippines as part of a named military operation, two unnamed Pentagon officials told NBC News on August 7 — a move that would accelerate U.S. military involvement in the Southeast Asian country’s campaign against the terror network.

Since June, U.S. special operations forces have aided the Armed Forces of the Philippines in expelling ISIS-affiliated militants from the group’s Western stronghold of Marawi, in the DoD’s favored “advise and assist” capacity, as part of Joint Special Operations Task Force Trident. And speaking at a regional security summit in Manila on the morning of August 7, Secretary of State Rex Tillerson affirmed that the DoD would continue to provide the AFP with “aircraft, surveillance capabilities, training and information,” per Fox News.

But new airstrikes, likely conducted by unmanned drones like the MQ-9 Reaper, “could be granted as part of an official military operation that may be named as early as [August 8],” the anonymous officials told NBC News. That type of escalation would put the U.S.-backed military campaign against ISIS in the Philippines on the same level as Operation Inherent Resolve in Iraq and Syria and, to some extent, Resolute Support in Afghanistan — yet another front in the Global War on Terror.

Related: US Special Operations Forces Have Opened A New Front In The Campaign Against ISIS: The Philippines »

“In every case where we see the resurgence of terror networks,” Gen. Paul Selva, vice chairman of the Joint Chiefs of Staff, told the Senate Armed Services Committee during his nomination hearing in July, “particularly in the fragile areas of the southern Philippines, I think it's worth considering whether or not we reinstate a named operation, not only to provide for the resources that are required but to give the Pacific Command commander and the field commanders in the Philippines the kinds of authorities they need to work with indigenous Philippine forces to actually help them be successful in that battle space.”

An increased military commitment by both the U.S. and AFP may be necessary to prevent ISIS, facing eradication in its “caliphate” of Iraq and Syria, from regrouping in the Philippines to fight again another day. On May 23, as many as 400 local militants claiming loyalty to ISIS stormed the southern capital of the Lanao del Sur province with assistance from “about 40 foreign fighters,” Reuters reported, with the jihadists reportedly “stockpil weapons and food in mosques, tunnels and basements to prepare for a long siege” in cities like Marawi to function as springboards across Southeast Asia. The government declared martial law on May 24.

Map of Mindanao Island in The Philippines where clashes between Islamist gunmen and government troops have left over 500 dead since May 23 pic.twitter.com/QjPUDvZk3r

The new front may pose problems for U.S. lawmakers increasingly inclined to impose limits on the 16-year-long global campaign against terrorism. But Pentagon officials suggested that the collective-self defense obligations established between the U.S. and Philippines in the 1951 Mutual Defense Treaty may provide the legal justification for the new air campaign, rather than the 2001 Authorization for the Use of Military Force that’s been cited by three presidential administrations to justify strikes against terror targets around the world.

“We have had a consistent CT presence in the Philippines for fifteen years now,” Pentagon spokesman Capt. Jeff Davis told NBC News. (The Office of the Secretary of Defense and U.S. Pacific Command did not immediately respond to requests for comment from Task & Purpose).

The Philippines seems to have a different take on its government’s relationship with the Pentagon — namely, that the U.S. was invited to show up and bomb the hell out of ISIS. On the morning of August 8th, Philippines Defense Secretary Delfin Lorenzana flatly dismissed the NBC News report, telling local media that the government had had “no discussion” with the U.S. regarding air strikes. “Nothing of the sort,” he told the Manila Standard. “I don't know how this news originated.”

Regardless of the legal justification for the new front against ISIS, a deepening military engagement with the current Filipino regime may still make some U.S. lawmakers nervous. For more than a year, President Rodrigo Duterte has waged a brutal crackdown on drug users that’s resulted in the killings of thousands of addicts and attracted serious criticism from both Western governments and human rights groups.

“Hitler massacred three million Jews. Now, there are three million drug addicts. I'd be happy to slaughter them,” Duterte said in September 2016. “At least Germany had Hitler. The Philippines wouldn't.”

Duterte’s draconian anti-drug campaign has raised concerns that his martial law declaration, ostensibly to beat back the rising tide of ISIS militants, may end up simply fanning the flames of radicalization that made the Southeast Asian country so appealing to both foreign and domestic jihadists. Those fertile conditions include “a dysfunctional legal system and endemic poverty,” and prisons that are “a prime recruiting ground for terrorists,” according to the New York Times. And others fear that the U.S. may end up simply supporting a murderous regime under the auspices of a narrow mission to root out ISIS.

While the Pentagon and AFP appear uncertain about the potential for a U.S. military escalation in the country, there’s at least one sign that it may be an inevitability. In April, President Trump praised Duterte for his “unbelievable job” in tackling the country’s drug problem through the extrajudicial slaughter of civilians, a chummy exchange leaked to the Washington Post in May. Should Duterte decide to rain down hellfire indiscriminately to purge his country of undesirable elements, it seems possible that Trump may be there by his side.