"The first throttle installation is scheduled for summer of 2020, after the hardware and software changes have been developed and fully tested to ensure the new configuration is safe, effective, and has training in place." 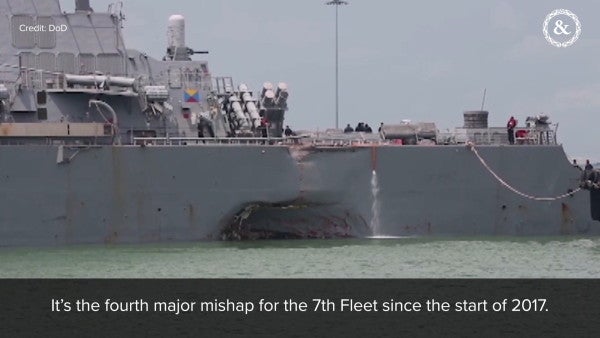 The Navy will install physical throttles on destroyers that currently use touch screen systems nearly two years after the USS John S. McCain collided with an oil tanker, which investigators blamed partially on the ship's Integrated Bridge and Navigation System.

Ten sailors aboard the McCain were killed on Aug. 21, 2017, when the destroyer turned into an oil tanker in the Singapore Strait. The collision was the result of a series of errors by the McCain's crew that began when a watch stander mistakenly transferred steering to another station.

In the confusion that followed, only one of the McCain's two propellers was slowed, causing the McCain to turn faster into the oil tanker's path, the National Transportation Safety Board found in a recent report.

“The transfer of thrust control independently for each propeller shaft was unnecessarily complex, and the touch-screen throttle controls deprived the lee helmsman of tactile feedback when the throttles were unganged and mismatched,” the NTSB's report said. “The NTSB concludes that the design of the John S McCain's touch-screen steering and thrust control system increased the likelihood of the operator errors that led to the collision.”

The report found that physical controls for throttle provide more information to sailors driving ships and make it easier to determine if the propellers are turning at the same speed or not.

“They are often preferred over touch-screen displays as they provide both immediate and tactile feedback to the operator,” the report says.

Now the Navy will begin installing the physical throttles for destroyers with the Integrated Bridge and Navigation System starting in the summer of 2020, said Colleen O'Rourke, a spokeswoman for Naval Sea Systems Command. USS Ramage will be the first ship that gets the throttles, which will complement the touch-screen propulsion system.

Prior to two separate collisions in 2017 involving the McCain and the destroyer USS Fitzgerald, the Navy had planned to phase out analog controls in favor of touch screens, but those plans changed after a comprehensive review into both incidents, O'Rourke told Task & Purpose on Wednesday.

“The addition of physical throttles will ensure that the engine orders are visibly represented by the position of the throttle levers; if they are mismatched, any bridge watch stander will be able to see it immediately,” O'Rourke said. “The throttle levers will also be installed with a lock that will allow them to be mechanically ganged together, as an extra safety measure.”