Yarrrrrrr, get ready to walk the plank, maties! Or, at least, hold yourself prone on your elbows for an extended period of time! 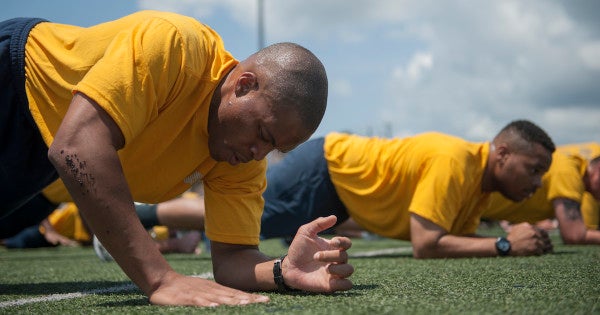 Yarrrrrrr, get ready to walk the plank, maties! Or, at least, hold yourself prone on your elbows for an extended period of time!

The Navy plans on adding a plank event to the service's physical readiness test in 2020, replacing sit-ups that are shown to “do more harm than good,” Chief of Naval Operations Adm. John Richardson announced on Thursday.

Richardson revealed the details of the upcoming PRT changes in a post-exercise video shot with the crew of Arleigh Burke-class guided missile destroyer USS John Paul Jones at Joint Base Pearl Harbor-Hickam in Hawaii:

In addition to ditching sit-ups, commands that have rowing machines are planning on adding a rowing event for cardio, Richardson said, adding that “you can choose to get onto a rowing machine to do your cardio if that's what you prefer to do.”

As Military.com notes, the Navy is following in the footsteps of the Marine Corp, which last year offered a 5,000-meter rowing test for those who opt out of a full run due to medical conditions.

But while Richardson stated that the changes came a result of fleet-wide feedback, it's worth noting that the adjustments come following the deaths of two recruits during fitness-related tests in as many months.

In late February, Seaman Recruit Kierra Evans was pronounced dead after after she collapsed following physical training event at her sixth week of basic training at Recruit Training Command Great Lakes in Illinois

The following April, Seaman Recruit Kelsey Nobles was pronounced dead at a nearby hospital went into cardiac arrest following the completion of a fitness test at the same base.

The Navy launched a review to evaluate training and safety procedures in the aftermath of the two incidents.

“If information is discovered during the course of the investigation revealing deficiencies in our processes and procedures that could improve safety in training, it would be acted on.” Lt. Joseph Pfaff, a spokesman for Recruit Training Command, said in a statement at the time.

Pfaff could not immediately be reached for comment on whether the changes announced Thursday were in response to that review.

WATCH NEXT: The Navy's 'Sky Penis' Incident, A Dramatic Reading