Somebody didn't read their Oath of Enlistment. 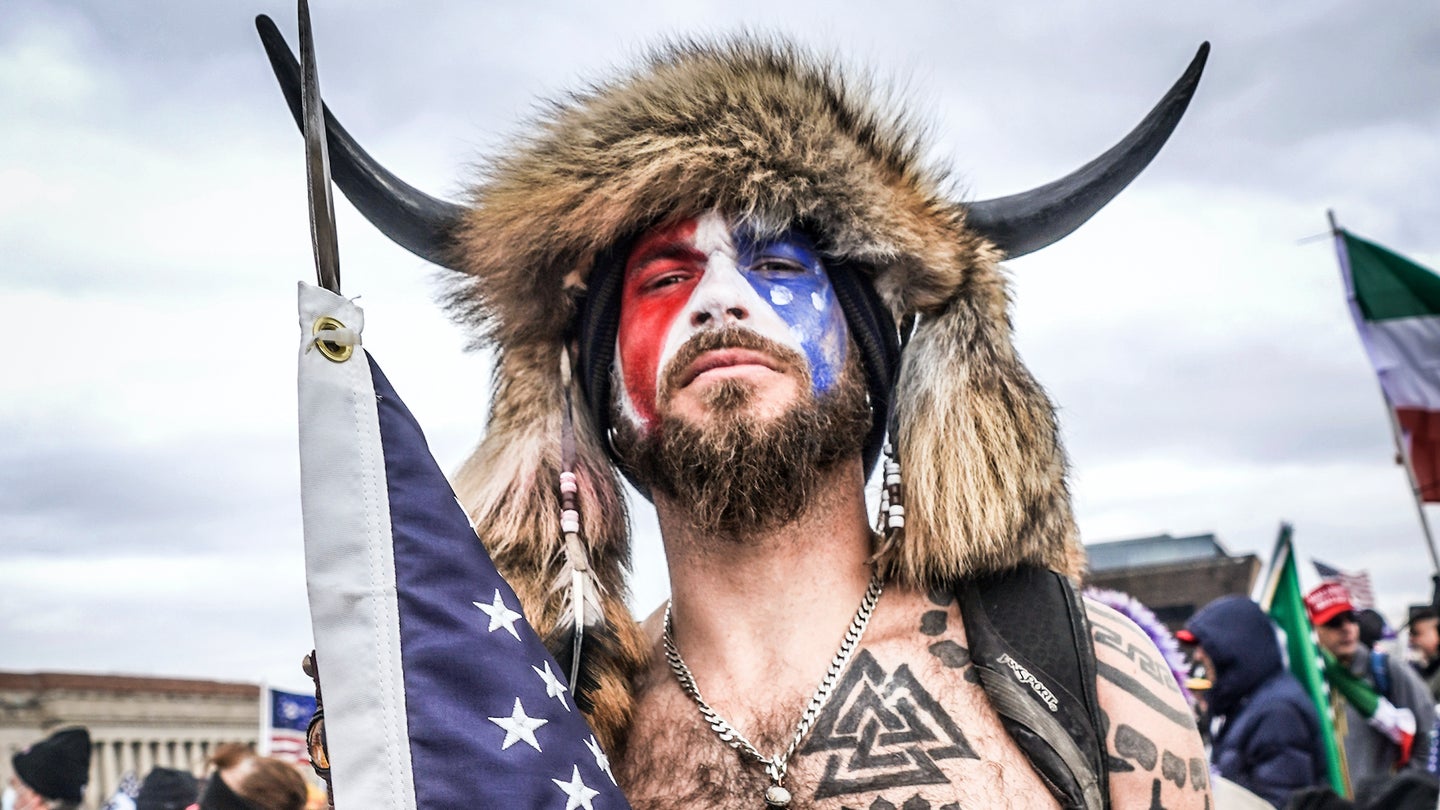 A portrait of Jake Angeli, a QAnon supporter known for his painted face and horned hat outside the US Capitol following a 'Stop the Steal' rally on January 06, 2021 in Washington, DC. The protesters stormed the historic building, breaking windows and clashing with police. Trump supporters had gathered in the nation's capital today to protest the ratification of President-elect Joe Biden's Electoral College victory over President Trump in the 2020 election. (Photo by Selcuk Acar/NurPhoto via AP).
SHARE

The infamous “QAnon shaman” found among the rioters who stormed the Capitol building in Washington, D.C. last week once served in the Navy but was kicked out after refusing to take a vaccine, Task & Purpose has learned.

The likeness of Jacob Anthony Angeli Chansley, 33, has been plastered across the internet since he showed up in Washington bedecked in a headdress and sporting star-spangled war paint — because nothing says “I’m an insurrectionist of the social media era” quite like getting Instagram-ready before storming your nation’s capital.

For those who have been following the rise of QAnon and their associated conspiracy theories over recent years, Chansley’s name is likely well-known thanks to his appearances at numerous Trump rallies and in subsequent news reports, particularly in his home state of Arizona. Hell, he even has his own Wikipedia page.

Gina Harkins with Military.com was the first to report on Chansley’s prior military service.

Here’s how the Department of Justice described his involvement in last week’s unrest which left five dead and others injured: “It is alleged that Chansley was identified as the man seen in media coverage who entered the Capitol building dressed in horns, a bearskin headdress, red, white and blue face paint, shirtless, and tan pants. This individual carried a spear, approximately 6 feet in length, with an American flag tied just below the blade.”

For his role in the riots, Chansley, who also goes by Jake Angeli and who likes to refer to himself as the “QAnon shaman,” surrendered to the FBI in Phoenix on Jan. 9 and was charged with knowingly entering a restricted building without lawful authority and with violent entry and disorderly conduct on Capitol Grounds.

“Chansley stated that he came as part of a group effort, with other ‘patriots’ from Arizona, at the request of the President that all ‘patriots’ come to D.C. on January 6, 2021,” according to a Justice Department statement of facts about his arrest. He also apparently hasn’t eaten because the food in jail is not up to his standards.

Much of this has been extensively covered in recent media reports. What’s less known is that Chansley had a short-lived career in the Navy.

According to his service record, Chansley enlisted out of Arizona as a supply clerk on Sept. 26, 2005. After completing recruit training and MOS school he was assigned to the USS Kitty Hawk in March 2006, where he stayed until Sept. 29, 2007, at which point he was transferred to a Transient Personnel Unit in Puget Sound in Washington state. He was processed out of the Navy on Oct. 11 of that year as a seaman’s apprentice — which means he got out as a boot E-2 with two years and 15 days in uniform.

A Navy official told Task & Purpose Chansley was booted from the service after he refused to take the anthrax vaccine. Citing privacy regulations, officials declined to provide the characterization of his discharge.

His military record notes that he received the National Defense Service Medal, Global War on Terrorism Service Medal, Sea Service Deployment Ribbon, and the Navy and Marine Corps Overseas Service Ribbon — but no personal awards of any kind.

Chansley is, unfortunately, not the only veteran or service member to grab headlines due to the chaos at the Capitol. Two of the people killed in the unrest were former service members on opposite ends of the confrontation: Brian Sicknick, an Air National Guardsman turned-Capitol Police Officer, and Ashli Babbitt an Air Force veteran who took part in the riot.

Additionally, Capt. Emily Rainey, an Army special operations officer, is under investigation for leading a group of roughly 100 people to the Capitol for the pro-Trump rally that quickly devolved into a riot. And as Military.com reported, Rendall Brock Jr., a retired Air Force Reserve lieutenant colonel, was arrested on Sunday in Texas after he was seen carrying flex-cuffs, wearing a Kevlar, and rocking military patches on his body armor inside of the Senate chamber at the U.S. Capitol.

This article was updated after publication with additional information on the nature of Chansley’s discharge.

Feature image: A portrait of Jake Angeli, a QAnon supporter known for his painted face and horned hat outside the US Capitol following a ‘Stop the Steal’ rally on Jan. 6, 2021 in Washington, DC. (Photo by Selcuk Acar/NurPhoto via Associated Press)