“Commodore Decatur himself was a man of great feats of heroism and grandeur.” 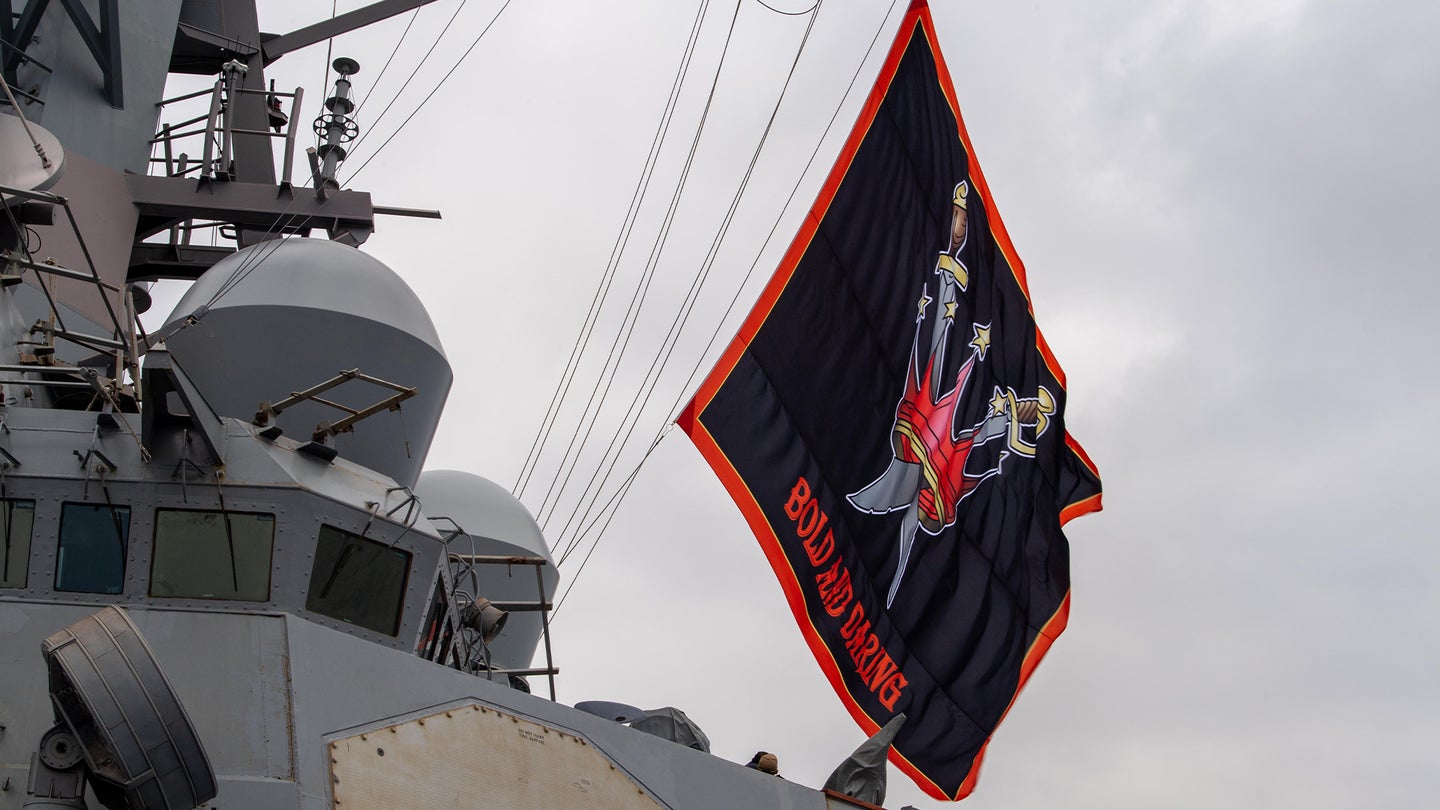 The term “swashbuckling” means “engaging in daring and romantic adventures with bravado or flamboyance,” and if there was a human embodiment of the term it might be Commodore Stephen Decatur, an American naval officer who led raids so daring that they still sound like legends today. Though the commodore died more than 200 years ago, his legacy lives on aboard the ship that bears his name, and the very cool battle flag that honors his memory.

“Commodore Decatur himself was a man of great feats of heroism and grandeur,” Lt. j.g Daniel Ehrlich III, a spokesperson for the Arleigh Burke-class guided-missile destroyer USS Decatur, told Task & Purpose. Late last month, the Decatur hoisted its battle flag with crossed swords at the end of an underway replenishment, which is when a providing ship pulls up alongside a receiving ship to drop off supplies. The Decatur is currently operating in the Pacific with the Nimitz Carrier Strike Group as it prepares for an upcoming deployment, the Navy wrote in the caption for a photo of the battle flag.

Many Navy ships sport battle flags honoring their namesakes. For example, the aircraft carrier USS Harry Truman bears a flag with crossed cannons, symbolizing President Truman’s old artillery regiment. Other flags are just plain fun, like the amphibious assault ship USS America flying a flag emblazoned with the Marvel superhero Captain America’s shield, or the guided missile destroyer USS Kidd raising a pirate-style Jolly Roger banner, or even the submarine USS Indiana rocking a flag with a belligerent fish wearing a pair of sonar muffs and brandishing a Mark 48 submarine-launched torpedo. But perhaps none are based on a namesake with a history quite as swashbuckling as Commodore Stephen Decatur.

Born in Maryland in 1779, Decatur was appointed a midshipman in the Navy in 1798, according to the Naval History and Heritage Command. He was a mere lieutenant during the First Barbary War, where the young United States sought to counter North African pirates endangering U.S. ships in the Mediterranean Sea. In December 1803, Decatur and his crew aboard the schooner Enterprise captured a small enemy ship, which was quickly re-named Intrepid. In February 1804, Decatur sailed the Intrepid into Tripoli harbor, where the U.S. Navy frigate Philadelphia had been captured by Tripolitans after running aground on a nearby reef. Decatur and 75 of his men entered the harbor disguised as a British merchant ship, according to the Navy.

“Under the ruse of losing their anchors in a storm, the cloaked Intrepid was given permission to moor alongside Philadelphia until morning,” the Navy wrote. “A Tripolitan guard’s warning that the ship’s occupants were American came too late as Intrepid’s crew boarded Philadelphia, overcame the Tripolitans, and set the captured frigate ablaze.”

Even the British Royal Navy legend Admiral Horatio Nelson took notice of Decatur’s courage, calling it “the most bold and daring act of the age,” according to the Navy.

The daring raid “made Lieutenant Decatur an immediate national hero,” the Navy said, but that wasn’t the end of Decatur’s larger-than-life story. In August 1804, the officer led an attack on Tripoli harbor, where “he led his men in hand-to-hand fighting while boarding and capturing an enemy gunboat,” according to the Navy, and where he rescued several American captives, according to the University of Michigan.

After the gunboat attacks, Decatur was promoted to captain and commanded several frigates over the next eight years, according to the Navy. His legend grew on October 25, 1812, when he and his crew aboard the frigate United States captured the British frigate Macedonian. In January 1815, Decatur was wounded when his ship, the President, was captured by the British. Luckily for Decatur, the War of 1812 officially ended a month later, and soon Decatur was sailing back to North Africa to fight more pirates as part of the Second Barbary War. In command of a powerful squadron, the commodore persuaded Algiers, Tunis and Tripoli to sign peace treaties “with the assistance of overwhelming force,” according to the Navy.

The commodore returned home and became a member of the Board of Navy Commissioners, which was formed to help the Secretary of the Navy administer the service. Decatur died as dramatically as he lived: in 1820 a fellow officer, Commodore James Barron, challenged him to a duel, which took place at Bladensburg, Maryland on March 22 that year. While both men were wounded, Barron survived, and Decatur died a short time later.

It was not long before Decatur had a ship named after him, the first of which began its Navy service in 1840, according to the Navy. Subsequent ships named after Decatur served throughout the 20th century up through 1998, when the guided missile destroyer DDG-73 took the name and entered service. Though the ship’s namesake often fought hand-to-hand, DDG-73 sports cruise missiles that can hit targets from hundreds of miles away, and the ship can also shoot enemy aircraft out of the sky with radar and missiles. But perhaps just as important as its weapons is the ship’s history and heritage, represented by its battle flag.

“This warrior ethos and the generations of Navy ships that have shared the namesake of Commodore Stephen Decatur is represented in the crest on the house flag,” explained Ehrlich.

The flag’s curved scimitar represents the commodore’s heroic exploits during the Barbary Wars, while the straight-edged sword represents his actions in the War of 1812, Ehrlich explained. The red crown symbolizes the ship’s anti-air warfare capabilities, Ehrlich said, while the five stars above the crown represent each of the five ships that once bore Decatur’s name. The words “bold and daring” are the same ones Admiral Nelson used to describe Decatur’s raid on the frigate Philadelphia. The color scarlet denotes courage, while the flag’s gold accents represent excellence, according to the ship’s website.

The USS Decatur has a colorful heritage, and the crew knows it whenever their flag is flown.

“To see it waving in the wind is to see over 200 years of American naval excellence through ‘Bold and Daring’ actions,” Ehrlich said.