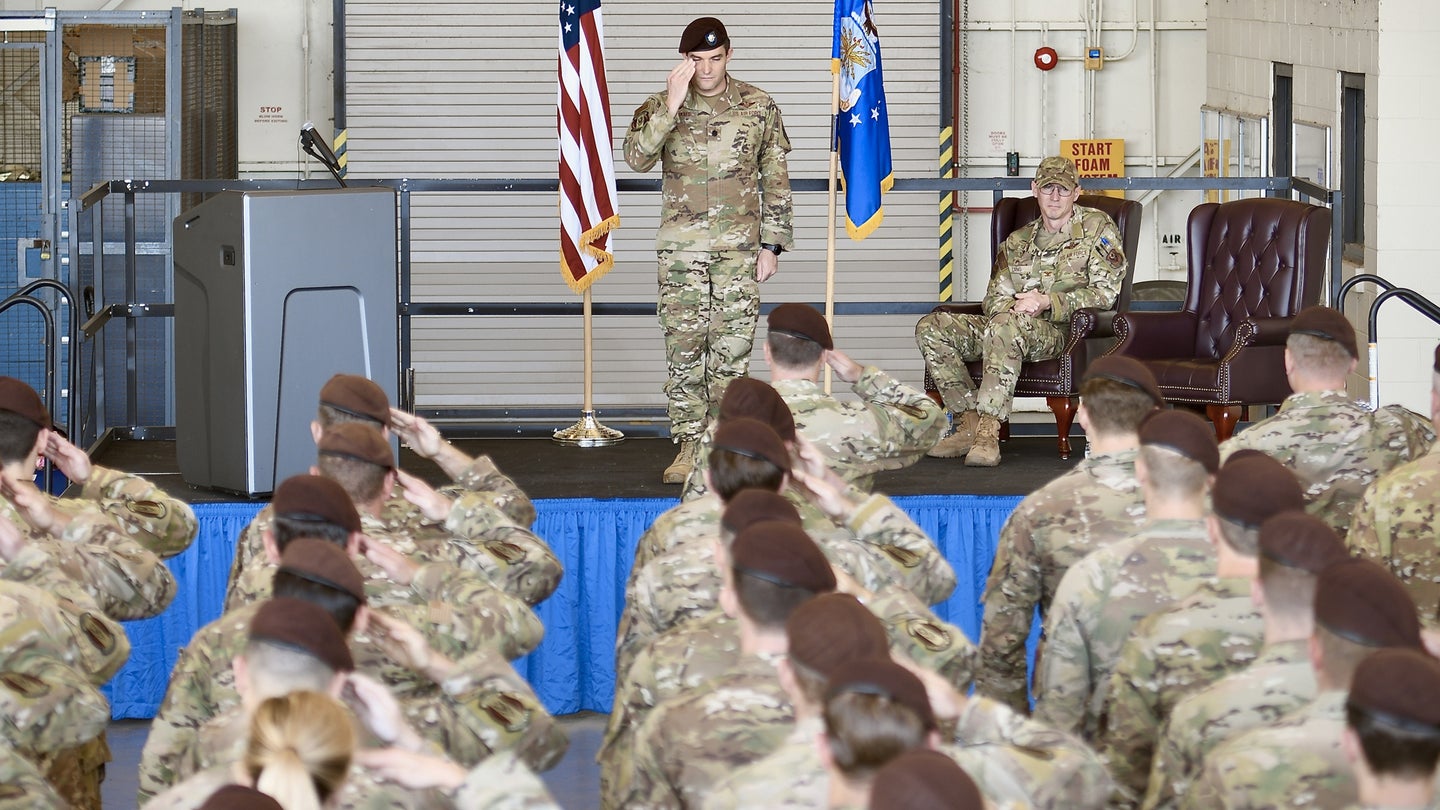 A little-known Air Force squadron that played a key role in the Global War on Terror was shut down last week in a ceremony at Duke Field in Florida.

The unit, the 6th Special Operations Squadron, was one of only two Air Force squadrons dedicated to helping foreign air forces learn how to use light aircraft to defeat insurgents, terrorists, or other threats in their own countries.

“The unit had a significant impact around the world as one of the very few units to execute this mission,” said Lt. Col. Sean Williams, 6th SOS commander at the ceremony on Thursday. “Today is not a finish line, it’s not the end of a mission set, it’s a milestone.”

The unit closures occur as the larger Air Force pivots to move away from counterinsurgency warfare and devotes much of its resources to preparing for the possibility of a large-scale conventional war. Still, some veterans of aviation advisory missions say that the unit closures mean the service could lose the ability to strengthen allies and partners so they can defeat emerging threats.

“[W]e are at an inflection point in the air advisor enterprise,” one senior Air Force official with direct engagement with the air advising program told Task & Purpose in August, “and the Air Force needs to decide whether it wants to take its version of security force assistance — air advising — seriously or just assume that someone else does it.”

The 6th SOS traces its lineage back to the jungles of Burma during World War II, but its modern role of advising friendly air forces for counterinsurgency warfare began in Southeast Asia in the 1960s. Under Operation Waterpump during the Vietnam War, U.S. airmen trained Royal Laotian Air Force pilots and Hmong civilians to fly T-28 civilian trainer aircraft in light ground attack and scouting roles in order to support Laotian ground troops in their war against Laotian communist guerillas and North Vietnamese troops.

“It was honest warring, primitive, a throwback to combat flying in the First World War,” wrote James Parker Jr., a CIA officer working with the Hmong, in 1972, according to the aviation history website Balloons to Drones. “The Hmong flyers strapped as many bombs and bullets as they could get on their planes and went out and found North Vietnamese to attack — flight after flight, hour after hour, day after day […] the major part of our close fire support was left to the T-28s.”

Airmen also trained pilots in similar situations in Central and South America before the unit that preceded the 6th SOS was shuttered in 1974, according to the Air Force. But in 1994, the unit was reactivated and redesignated as the 6th SOS. Its mission under U.S. Special Operations Command was to help allies and partners conduct Foreign Internal Defense, where U.S. allies or partners are fighting counterinsurgency, counterterrorism, or counternarcotics campaigns.

Throughout their modern existence, the 6th and 711th SOS closely resembled U.S. Army Special Forces units due to the latter’s expertise in training allies and partners to fight on the ground. Combat aviation advisors do the same thing, but in the air. In fact, CAAs and Green Berets often find themselves working shoulder-to-shoulder downrange, said Air Force Master Sgt. Justin Prewitt, a combat aviation advisor, on the Air Force Special Warfare veteran-run podcast Ones Ready.

“The closest analogue that our predecessors had to look at in order to build out this aviation foreign internal defense mission set was the Army Special Forces,” Prewitt said in a 2021 episode about combat aviation advisors. “It was pretty easy to steal some pages from their playbook and then kind of put that aviation mindset on top of that.”

Prewitt explained that there is no specific “combat aviation advisor,” job in the Air Force. Instead, CAA units were made up of volunteer airmen who already had extensive experience in their specialties and who volunteered to take on the role for four to five years. Prewitt said the units took airmen from 14 enlisted career fields and six commissioned career fields, including pilots, aircraft maintainers, intelligence analysts, security forces (the Air Force equivalent of military police), and communications specialists.

According to the Air Force, those volunteers then underwent a 12 to 18-month training pipeline to train them in light infantry weapons and small unit tactics and also give them language and culture training so they could better bridge the gap with their students. Once the combat aviation advisors knew where they are going, they would then lease and practice on aircraft similar to the ones operated by the country hosting them.

“That way we can show up qualified and ready to rock and roll with that specific airframe,” Prewitt explained.

Over the past 30 years, 900 combat aviation advisors have gone through the 6th SOS, deploying to more than 45 partner nations and working on more than 40 different types of aircraft, according to the Air Force. Those aircraft are often helicopters or propeller-powered fixed-wing aircraft, including Cessnas and cropdusters armed with Hellfire missiles or other weapons or sensor systems.

Combat aviation advisors have a proven track record. Starting in the early 2000s, they taught Filipino aviators how to operate UH-1 Huey helicopters effectively against the Abu Sayyaf Group, an Islamic separatist organization. Prewitt, who was part of that mission, said he was particularly proud of establishing a tactical flight medic program where they trained Filipino medics in tactical casualty care and care-in-flight skills. That made a difference, the airman explained, because before that the Filipino ground forces were hesitant to close with the enemy due to the fear that medical evacuation would not be possible.

“That was really a game changer in their foreign internal defense issues,” he said. “Building that confidence in their ground forces based upon a capability that we were able to build with our aviation forces—that enabled them to get after these issues a little bit more aggressively than they had in the past.”

In Afghanistan, airmen from the 6th and 711th SOS helped stand up the Special Missions Wing, which the Special Inspector General for Afghanistan Reconstruction said in 2020 was “one of Afghanistan’s most capable forces.” The SMW was the special operations wing for the Afghan military, where it flew counterterrorism and counternarcotics missions, according to the report.

Perhaps in part because of their hard work overseas, combat aviation advisors were recognized in 2018 with a special perk: a brown beret they could wear in uniform. The charcoal brown color “signifies fertile soil and reminds the wearer daily to look for potential where others see barrenness,” according to an Air Force press release. It also signified “grit, hard work and commitment to transform potential into capability.”

Brown was a popular color in 2018: that same year, the Army unveiled berets with a similar color for members of Security Force Assistance Brigades to wear. For the Army, the color represented “the muddy boots,” of SFAB soldiers always fighting side-by-side with their partners. The color was a little more figurative in the Air Force.

“I can tell you what I expect when I see a brown beret,” Lt. Gen. Brad Webb, then-chief of Air Force Special Operations Command, said at the ceremony where the berets were first donned by combat aviation advisors. “I expect to see a cultural expert–one that has a complete understanding of a host nation’s customs, culture and way of life.”

Despite the success of the SMW, not everything was working in the aviation advisory missions in Iraq and Afghanistan, as two Air Force officers recently explained.

“The U.S. military utilized aviation advisors in an ineffective ad hoc approach that we can best describe as an amateur pickup game—random, inexperienced personnel working together briefly before rotating out,” wrote Col. Tobias Switzer and Lt. Col. Jonathan Magill in an essay on aviation that was published on Tuesday by West Point’s Modern War Institute.

Units like the 6th and 711th SOS brought institutional knowledge to the art of combat aviation advising. However, much of the rest of U.S. military aviation training and advising in Iraq and Afghanistan was done on an haphazard basis where individual augmentees were plucked from joint or coalition forces, dropped into the advisory mission with little training on how to do it, then replaced with another inexperienced augmentee as soon as they began to learn something, Switzer and Magill wrote.

“In effect, advisor missions were forced to continually climb the learning curve only to slide back down when advisors departed en masse with their hard-won knowledge and experience,” they wrote.

With the inactivation of the 6th SOS and the pending inactivation of the 711th SOS, the Air Force is dissolving “the vast majority of its in-aircraft aviation advising capability, proving once again the perishable nature of this important mission within the service,” Switzer and Magill wrote. There will still be the Air Force’s Mobility Support Advisory Squadrons, but those units specialize in logistics and mobility, not so much combat operations.

“The U.S. military will have such a limited capacity that it will likely have to employ an ad hoc approach when the need for large-scale air advising arises again,” the officers said.

The military can still make large-scale air advising work, but it will need to track advisor experience across the military in order to recall practiced advisors if needed; design personnel rotations that better sustain continuity in advising cycles; use an onboarding process for new advisors that actually works; and put defense contractors to better use, Switzer and Magill said.

No matter what, it seems that the brown beret and the institution it represents will be shelved for the foreseeable future. But who knows, with the on-again, off-again history of the 6th Special Operations Squadron, maybe it will come back some day.

“Airmen of the 6th SOS carried on a legacy deploying to partner nations around the world,” said Colonel Caleb Nimmo, commander of the 492d Special Operations Wing, of which the 6th SOS is a component, at the inactivation ceremony. “Their accomplishments honor those that came before them and set the standard for future Air Commandos.”