‘Untethered’ Air Force general: ‘When you kill your enemy, every part of your life is better’

"The pile of our nation’s enemy dead, the pile that is the biggest, is in front of the United States Air Force." 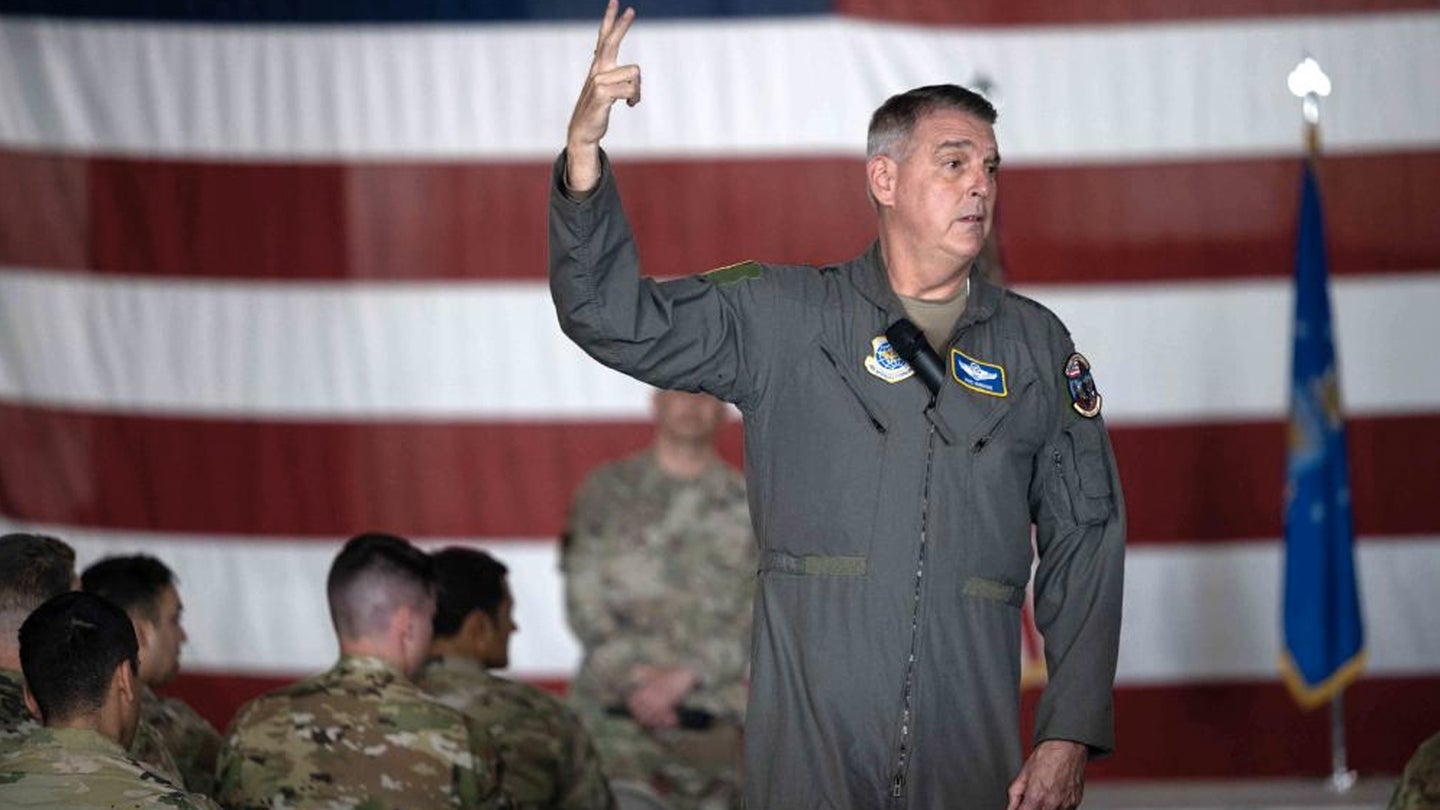 An aerospace industry conference took on more of a tent revival feel on Wednesday when an Air Force general took the stage and sought to fire the audience up about the existential threat he said China posed to the American way of life and the urgent work needed to defeat it.

“I’m untethered as of now,” said Gen. Mike Minihan, the head of Air Mobility Command, in his keynote address at the Air & Space Forces Association’s Air Space & Cyber Conference at National Harbor, Maryland. “I do have something to say. I can’t see the clock, I’m going to go ‘till I go. I’m finally that rank.”

The general’s speech was titled ‘The Mobility Manifesto,’ and he turned up the volume as high as the title implies.

“I’m gonna speak not speech!” he said. “Means it’s going to come out a little wobbly at times, maybe stutter, I might get some spittle going … Means that I’m Irish! You’ve certainly already heard that when I talk about things that I love I get emotional! And you’ll hear the passion in my voice.”

As Minihan laid out, the U.S. military is currently not ready “to fight and win inside the first island chain” in the Pacific against the Chinese military in a potential conflict. This is a problem because “your kids grow up subservient to a rules-based order that benefits only one country if we lose this,” he said.

“There is no access to the global commons. There is no ‘free and open.’ There is no rules-based order. So the stakes are incredibly high,” he continued.

The Air, Space & Cyber Conference is the biggest of the year for the Air and Space Forces, filled with star-studded generals, titans of the aerospace industry, and thousands of service members from both the U.S. and from foreign militaries around the world. This year’s event was the largest ever, with 16,000 registrants and standing room only at several of the speaker panels.

Minihan is far from the first speaker at a service-wide conference to warn about the threat of China and the urgency to face it. In fact, the message was so persistent at the 2021 edition of the conference that one reporter made it into a meme. But the general’s passionate tone and one-liners stood out amid the scripted deliveries of most of the other keynote speeches.

“Lethality matters most,” he said. “When you can kill your enemy, every part of your life is better. Your food tastes better. Your marriage is stronger,” Minihan said.

That kind of language would not be unusual coming from other commanders like the former Secretary of Defense James Mattis, a retired Marine general whose famous quotes include “There are some assholes in the world that just need to be shot,” and “If you fuck with me, I’ll kill you all.” But, Minihan is not a former Marine rifle company commander like Mattis was. He’s a C-130 transport plane pilot who now commands the Air Force’s C-17 and C-5 cargo jet fleet, plus C-130s, KC-135, KC-10, KC-46, and other refueling and transport aircraft.

“Why is the mobility guy talking about lethality?” Minihan asked in his manifesto. In answer, he reminded the audience that the Air Force has a kill count which could make even Mattis balk.

“This is who we are. We are lethal. Do not apologize for it!” the general said, after listing distinguished Air Force commanders like Gen. Curtis LeMay and Brig. Gen. Robin Olds, who had no scruples against killing the enemy.

“The pile of our nation’s enemy dead, the pile that is the biggest, is in front of the United States Air Force,” he said. “This is why we mutinied! In 1947,” the year the Air Force separated from the Army as the result of an act of Congress.

Considering the vast reaches of the Pacific Ocean, where a fight with China would most likely occur, the U.S. military likely would not be successful if Air Mobility Command can’t get troops, ammunition, and equipment to the fight fast enough.

“There is too much water and too much distance for anyone else to do it relevantly, at pace, at speed, at scale,” Minihan said. “Everybody’s role is critical, but Air Mobility Command is the maneuver for the joint force. If we don’t have our act together, nobody wins. Nobody’s lethal. Nobody’s in position.”

Minihan is no stranger to making bold statements. In January, the general tweeted a photo of a mental health appointment on his calendar along with the words “Warrior heart. No stigma.” Though many military commanders encourage their subordinates to seek mental health, few open up about their own struggles or efforts to seek help, let alone share their own personal calendar.

“Mental health is simply health,” he told Task & Purpose at the time. “There can be no stigma in my headquarters, command, or family.”

Minihan also earned kudos on social media when his official service photo circulated on Reddit last October, shortly after taking the helm of Air Mobility Command. Though most four-star generals sport a chestful of colorful ribbons on their uniforms in their official service photo, Minihan’s bore only three, all of which were unit-based rather than individual awards.

“Gen. Minihan’s decision to wear these three ribbons is in accordance with AFI 36-2903 guidance to wear ‘all or some’ [ribbons], and the some he selected aligns with his team-focused leadership approach,” Lindsey Wilkinson, the deputy director of public affairs for Air Mobility Command, told Task & Purpose at the time.

Airmen say the general backs up his gestures with words and actions. One airman who worked in aircraft maintenance at Dyess Air Force Base, Texas and as a flight engineer at Little Rock Air Force Base, Arkansas when Minihan was there, told Task & Purpose that the officer “was always approachable, you never felt like you had to be on edge around him.”

Minihan “always truly made you feel as if you were the only person that mattered at that moment when the two of you spoke,” said the airman, who stayed anonymous because they were not authorized to speak with the press.

On Wednesday, the general seemed intent on motivating his people and the larger Air Force to move faster in order to protect themselves in the event of a conflict with China. The U.S. is currently not ready to win in the first island chain in the Pacific, but it can be by August 2023 if everyone moves fast enough, he argued.

“They are tailor-making an air force to kill you,” Minihan said, about China. “Not you, hypothetically, you! Look in the mirror. You!”

Other Americans have faced similar odds in the past. The general referenced World War II commanders like Gen. Jimmy Doolittle, Adm. Raymond Spruance and Gen. Ira Eaker, each of whom faced a “quality, quantity, tailor-made force to kill him.” Those commanders prevailed, and so too can today’s U.S. troops if they “generate your courage. Aim the pointy end at the scary place, and execute,” Minihan repeated three times.

It would also help if Air Mobility Command can address four gaps in its capabilities that the general is concerned about: command and control, navigation, maneuvering under fire, and tempo. To bridge those gaps, Minihan urged his troops to get creative. For example, his troops could fly a KC-46 refueling tanker with just one pilot so that other pilots can fly other jets; or stick 16,000 pounds of gas under the wings of a C-130J so it can fly to a forward-deployed fuel bladder where a fighter can use the gas to fill up.

“I don’t think fighter pilots are the only ones that have the birthright to fly an airplane solo,” Minihan said. “In order to generate the tempo required to win, it’s not hard to imagine” a pilot and refueling boom operator sleeping on the bunk of a tanker jet while another pilot and boom operator pulls a shift flying the plane and refueling friendly aircraft.

“I’d rather test that out now than try to figure that out when the shooting’s going on,” he said.

But that kind of creativity needs to happen now, the general said, not down the road.

“Nobody is going to care what our plans are for five to 10 years if we lose tomorrow,” he said. “Our toys, our training, our desires are meaningless unless we maneuver them to unfair advantage and unrepentant lethality.”

That was likely why the general chose to be so forceful and passionate in his delivery on Wednesday, and why he chose to call his speech a manifesto.

The general does not have much time to share it, he said.

“We are not ready to fight and win inside the first island chain but we WILL BE in a year,” Minihan said. “‘Well sir, that’s a lot to do in a short time.’ Yeah, no shit.”