Boeing's got some more 'splainin to do 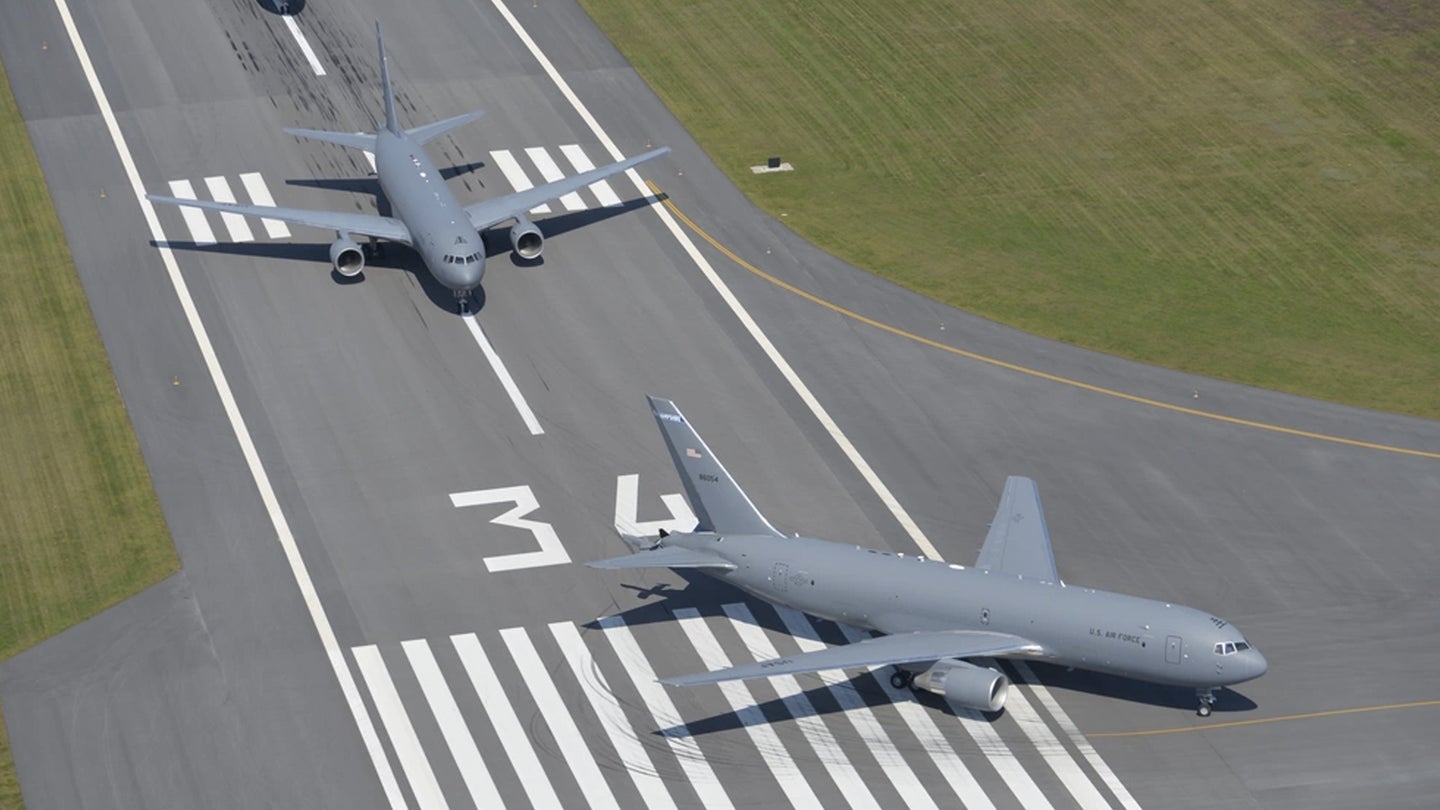 If you ever feel like your life’s a mess, remember that it could be worse: you could be an air-to-air refueling tanker that’s already five years late, billions of dollars over budget, and still racking up problems that will take years to fix.

If that sounds like you, you’re probably the KC-46 Pegasus, a beleaguered tanker the Air Force is counting on to replace its aging KC-135 and KC-10 tankers.

The KC-46 is riddled with issues: like the fact that the remote vision system crew members use to steer the plane’s refueling boom doesn’t work in changing lighting conditions, or the fact that its lavatory leaks shit when in a steep climb or dive. And now the latest trouble: the tanker’s over-wing emergency exit doors can’t open without crews installing a makeshift modification.

Those doors have a trim that prevents the door from opening inward, which can make it hard to get out of the plane during an emergency, explained Maj. Hope Cronin, a spokesperson for Air Mobility Command. The problem was identified in March, and Air Force engineers worked quickly with Boeing to develop a temporary fix: stick some Velcro on it.

“This change removes the associated emergency risk until a permanent modification can be made,” Cronin said in a statement.

The Velcro fix does the trick from an operational perspective, Cronin said, and in that sense, it’s not much different from service members using duct tape to fix any other aspect of the U.S. military. Boeing said it did not have a cost estimate for making a permanent fix and retrofitting the 57 tankers flown by the U.S. military and two flown by Japan, according to The Seattle Times, which first reported the story.

The over-wing emergency exit doors are not essential to the KC-46’s main mission: aerial refueling. Most of the aircraft is unoccupied during those missions, and the flight crew has their own set of emergency exit doors towards the front of the plane. However, the Pegasus is a multi-role aircraft that can also perform troop and cargo transport and aeromedical evacuation missions. There is a third set of emergency exits towards the back of the jet that passengers can use, but it would take longer for everybody to get out if for some reason the Velcro solution fails.

“We are carefully examining our processes to determine why this issue was not identified sooner,” Boeing told The Seattle Times.

Boeing has had a lot of KC-46-related ‘splainin to do for the Air Force and for Congress over the past few years. In 2019, the service had to halt its delivery of the aircraft because loose tools and other debris were found in brand-new planes. Will Roper, then-assistant secretary of the Air Force for acquisition, technology and logistics, said at the time that the debris was due to “a cultural issue” at Boeing, according to United Press International. “This is not something you fix by sending out a memo, and then there’s no foreign object debris in the airplanes,” Roper said. “[C]ulture does not fix easy.”

Other critical problems included cargo pallets detaching from the aircraft floor during multiple flight tests; improperly-welded drain masts (which allow the airplane to drain hydraulic fluids or fuel); leaky fuel systems; and a refueling boom that’s too stiff for lighter aircraft like A-10 attack planes or F-16 fighter jets to use, according to a January report by the Government Accountability Office.

Though some of those problems have been addressed, the plane’s Remote Vision System, which allows the crew to control the boom from the front of the plane, continues to be one of the tanker’s most troublesome features. At first, the boom operator could not even see clearly enough to dock the boom to the receiving aircraft, and at night the operator could not distinguish between the boom tip and the receiver aircraft. Keep in mind that a misplaced boom could damage the receiving aircraft or the boom, which could make both assets useless or endanger the aircrew.

Even now, when the sun is at a certain angle, it makes the image of the receiver aircraft “momentarily wash out or black out” on the boom operator’s screen, the GAO wrote, and it is not expected to be fixed until 2024. No new system is perfect, but the difficulties with the KC-46 come at a particularly bad time for the U.S. military, which is preparing to send aircraft long distances across the Pacific or Arctic Oceans in a possible war with Russia or China.

Refueling tankers are the unsung heroes of the American military: without an airborne gas station, the fighters, bombers and transports that troops on the ground rely on for supplies and air support don’t have enough fuel to get to the fight. But the Air Force’s current fleet of tankers is so old that many of them need to be retired in the next few years. The KC-135 fleet is about 60 years old on average, while the KC-10 fleet is about 35. But with the KC-46 encountering so much turbulence it could be a while longer for the Pegasus to reach full-rate production, and the KC-135 may need to keep flying into the 2030s.

Despite those challenges, the KC-46 is far from useless. In fact, the tanker has refueled quite a few U.S. fighters and bombers patrolling NATO’s eastern front this week, according to Breaking Defense. Though it still can’t refuel certain aircraft like the A-10, it can refuel 85 percent of U.S. aircraft types, including the fifth-generation F-35 and F-22 fighters.

“Since January 2019, the KC-46A has routinely conducted missions in the U.S. as well as overseas in the Pacific, Middle East, and Europe,” Air Mobility Command spokesperson Capt. Christopher Herbert told Breaking Defense. “This latest employment of the KC-46A to Europe represents yet another step in the aircraft moving towards full operational capability.”

The KC-46 won’t be declared fully operational until its Remote Vision System and other critical problems are fixed. Until then, Velcro will have to do.