The Marine Corps has an eating disorder problem

The Corps' relentless focus on physical appearance is hurting its troops, a new report says. 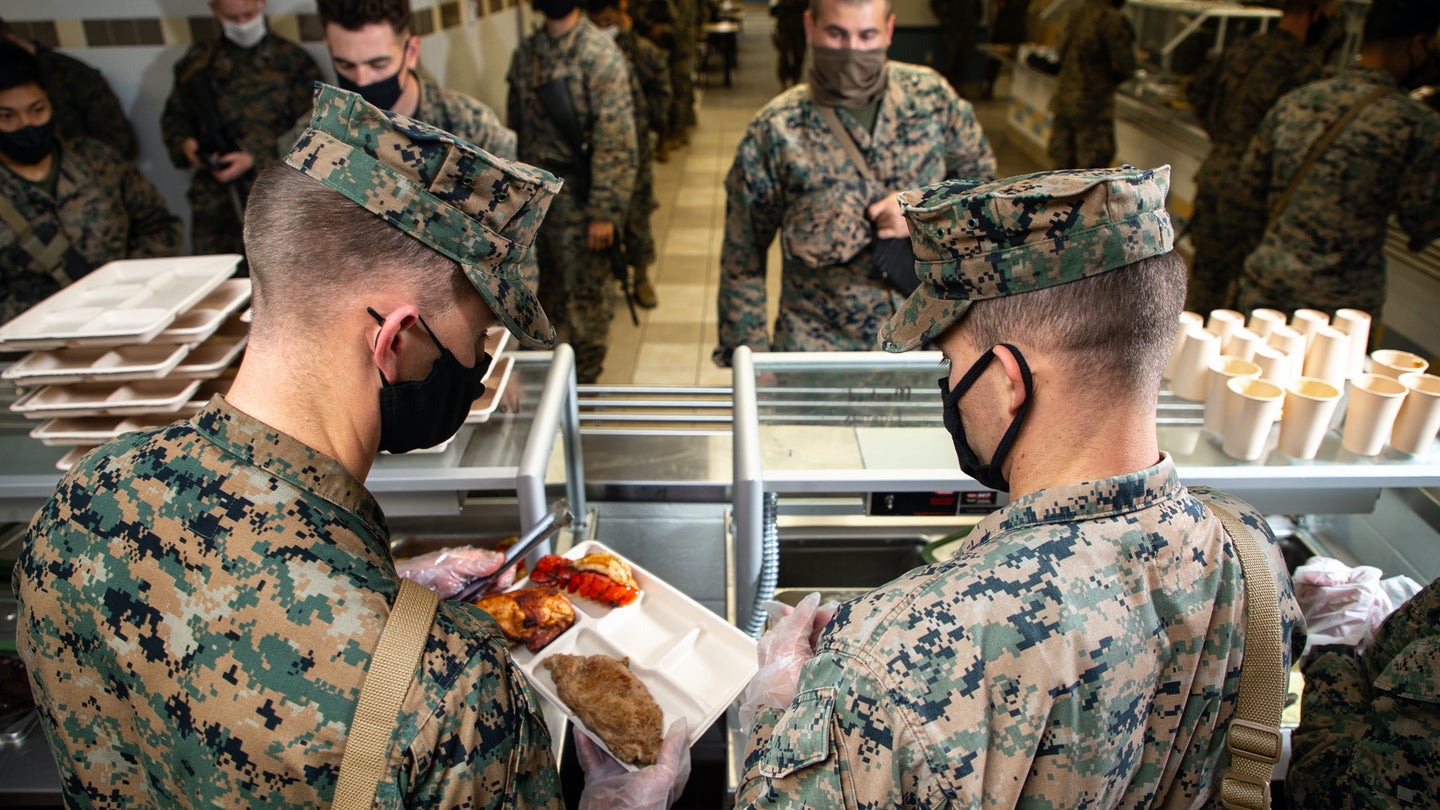 The Marine Corps’ relentless focus on physical appearance is resulting in Marines turning to unhealthy and dangerous eating disorders at nearly double the rate of other service members, according to a new report from the RAND Corporation.

The 106-page report released last Friday says the Marine Corps “places a heavier emphasis on the need to maintain personal appearance” than the other services, and that its requirements to increase muscle are “at odds with Marine Corps policy encouraging a ‘lean and trim’ Marine.” In order to meet those standards, RAND’s report said, Marines “are adopting unhealthy eating disorder behaviors.”

1st Lt. Phillip Parker, a spokesman for the Marine Corps Training and Education Command, said Wednesday that the service was aware of the report and “is currently reviewing” its findings and recommendations. He noted that the Marine Corps has been studying its body composition program since 2021, which, according to Parker, is “the most comprehensive and technologically advanced analysis of body composition standards we have conducted since the 1980s.”

While the RAND report focuses on the Marine Corps, they are not the only service whose troops experience eating disorders and disordered eating, which are harmful habits that can lay the groundwork for eating disorders but don’t yet meet the medical criteria for a diagnosis. The Army is also studying its body composition standards, which are similar to the Marine Corps standards in many ways.

In the case of eating disorders specifically, however, there is little being done by the Pentagon in terms of understanding the problem, despite data suggesting eating disorders can have serious long-term health impacts, such as infertility, cognitive impairments, skeletal problems, and even higher risk of suicide and mortality.

Studies about disordered eating and its impacts on the military “have been relatively rare” in comparison with research on the civilian population, the RAND report says. Because of the lack of information, it’s likely that the reported rates among the services “significantly underestimate” just how common it actually is.

“Although diagnoses are rare, eating disorders are among the most common and easily hidden mental health conditions, and the military lifestyle and culture is primed to hide risky behavior,” RAND’s report says. “Additionally, a service member can be separated from the service for an eating disorder diagnosis if the illness does not respond to treatment … The stigma associated with eating disorders, along with the expectation that they mainly affect women, potentially serves to shift attention from the phenomenon or mask its existence among service members.”

According to the report, the correlation between career advancement and body measurements is also a significant problem, which “codifies the idea that appearance and shape can determine personal value.” An Army major who spoke to Task & Purpose last August also lambasted the idea that “so much of people’s reputations are on these silly” height and weight tests.

The Marine Corps’ body composition policy directly ties how a Marine looks to their ability to do their job: “Simply put,” the policy says, “Marines who do not present a suitable military appearance fail to possess the qualities necessary to effectively lead Marines.”

Body composition standards ensure Marines “present a ‘suitable military appearance’” and pass the service’s physical fitness standards, the RAND report says, but those standards “use outdated data,” and “do not reflect the current Marine Corps population.”

For example, the military often uses body mass index, or BMI, as an indicator of health, but experts say BMI is an outdated and inaccurate way to measure a person’s health. BMI is “a flawed tool” that “cannot differentiate fat from muscle mass,” according to RAND, which is problematic for Marines with physical fitness standards pushing them to develop muscle.

Indeed, while the Marine Corps’ physical fitness standards have evolved over time, the body composition standards have not, RAND said, which in turn can push Marines “to adopt unhealthy behaviors to comply with policy.” But it’s not only the height and weight standards that can result in unhealthy habits; the culture and unique experiences in the military can create a “perfect storm” for eating disorders, Katrina Velasquez, chief policy officer for the Eating Disorders Coalition, told Task & Purpose in August 2021.

Post-traumatic stress disorder from combat or military sexual trauma, the pressure to look the part of a good soldier or Marine, and getting weighed in front of peers are all factors that can result in unhealthy eating habits.

“PTSD, military sexual trauma, and eating disorders go so, unfortunately well together,” said Dr. Jillian Lampert, the chief strategy officer for The Emily Program and Veritas Collaborative which focus on eating disorders. “That’s why we believe we see a higher prevalence, and the diagnoses of eating disorders do seem to be increasing over the last five years or so.”

Military veterans with disordered eating habits “reported higher rates of depression and PTSD than their peers,” according to the report, which said that female veterans diagnosed with PTSD were “nearly five times as likely” to have anorexia. A study in 2009 showed that 30 to 40% of female veterans seeking treatment for military sexual trauma had “some form of disordered eating behavior,” according to RAND.

Other factors driving eating disorders include the kind of food service members are eating, especially in deployed or field environments, along with adverse life experiences or childhood experiences. The report also says that people already struggling with disordered eating could choose to enter the military because the culture “offers a way to hide risky behaviors while making oneself seem invulnerable.”

Some Marines may embrace unhealthy eating habits because of their own leadership, according to RAND’s report. Superiors are “often not cognizant or thoughtful” about how their words can affect their subordinates, the report says, but “words and standards that female service members are repeatedly exposed to” could have serious long-lasting effects.

When it comes down to it, for an institution that puts health and fitness on a pedestal in the way the military does, making it a core value instilled in its members, the military does not know nearly enough about how eating disorders and disordered eating are hurting its troops.

One of the ways RAND suggests the Marine Corps can begin to learn more about this problem is by looking more closely at the Marines who are passing height and weight, not just those who are not. Data on Marines who are at risk of not meeting the standard will likely show some unhealthy behaviors, as they are trying to “make weight.” But Marines who are within the policy could just as easily have the same unhealthy habits, while not being held under the same scrutiny.

“In fact,” RAND’s report says, “given how the service prizes and praises peak physical fitness and appearance, Marines who develop and maintain risky behaviors to conform to the policy and standards are not only hiding these behaviors and the potential impacts they bring, but they may be, concerningly, considered model Marines.”

Ultimately, RAND urged the Marine Corps to pause its height and weight requirements while it considers their recommendations, which includes re-evaluating whether height and weight “are still necessary requirements,” and change the wording of its policies that tie physical appearance to Marines’ leadership and character.

RAND also suggested that the Marine Corps build awareness around eating disorders, particularly when units are nearing a weigh-in, by increasing education and screening for eating disorders to help them “better understand the scope and scale of the problem.”