The Marine Corps is currently in the process of testing a long-range electroshock weapon that, fired from a 12-gauge shotgun, is designed to incapacitate targets at distances of up 100 yards away 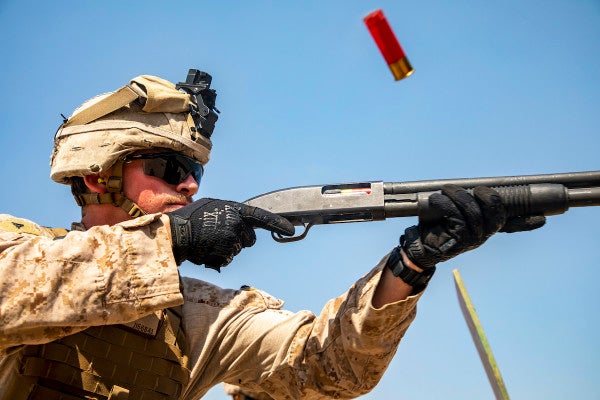 The Marine Corps is currently in the process of testing a long-range electroshock weapon that, fired from a 12-gauge shotgun, is designed to incapacitate targets at distances of up 100 yards away, according to reports.

Rather than firing a pair of wired electrodes like the standard-issues Taser X26, each SPECTER round will reportedly contain a wireless bundle of tethered electrodes capable of incapacitating targets at ranges of up to 330 feet away.

“To reduce the risk of blunt force injury to anyone hit by the projectile, it deploys a tiny parachute right before hitting its target, cutting its speed in half,” according to Stars and Stripes. “When the round gets within a meter of its target, it shoots out three electrode darts that can penetrate clothing and stick in the skin.”

Both Harkind Dynamics and Marine Corps Systems Command referred questions to JIFCO, which did not immediately respond to request for comment.

The Marine Corps has been on the hunt since at least 2018 for a wireless human electro-muscular incapacitation (HEMI) round with a range of at least 100 meters (328 feet) that can stun targets for up to thirty seconds.

Harkind Dynamics was awarded funding through the U.S. government's Small Business Innovation Research program in 2019 to develop a small-arms, long-range HEMI round for use in standard-issue 12-gauge shotguns.

“A 12-gauge munition will have improved aerodynamic stability, flatter trajectory, and better accuracy than larger munitions, such as 40 millimeter,” according to the SBIR abstract of the Harkind award.

“Additionally, higher muzzle velocities can be used, thereby increasing effective range, by employing an electrode propulsion system to propel the electrodes forward of the munition towards the target, while simultaneously reducing munition velocity prior to impact, aiding in reduction of blunt impact injury.”

Related: The Marine Corps is looking for a Taser bullet

News of the SPECTER round comes amid a broader effort among Marine Corps leaders to prepare the service for potential conflicts against 'great power' adversaries like Russia and China after decades of combatting violent extremists across the Middle East and North Africa.

In a guidance on non-lethal weapons published in May, Marine Corps Commandant Gen. David Berger noted that the Pentagon was investing heavily in “intermediate force capabilities” for circumstances where “any collateral damage—however lawful—to provoke escalation, generate negative views of America, or to erode political and public support for our operations.”

“The unintended consequences of lethal force can undermine our legitimacy, and may complicate our operations,” Berger wrote. “Decisions to use—or forego—lethal force can incur a heavy cost. Intermediate force capabilities enable U.S. and allied forces in delivering accurate, tailorable, and compelling effects in complex and ambiguous scenarios, while simultaneously preventing unnecessary loss of life or destruction of property.”

Related: Marines are testing a non-lethal mortar round for crowd control