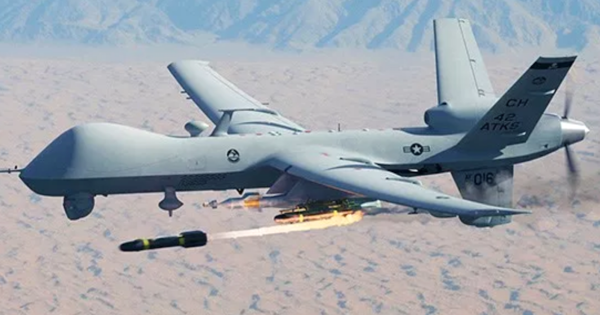 A drone strike that killed two senior commanders of an al Qaeda-linked terror group in northwestern Syria likely employed a unique variant of the beloved Hellfire missile, according to video from the scene of the strike.

Two leaders of the al Qaeda offshoot Horas al-Din, Jordanian citizen Qassam al-Urduni and Yemeni citizen Bilal al-Sanaani, were reportedly killed when a drone strike believed to have been carried out by the U.S.-led coalition nailed their vehicle on Sunday, the Associated Press reports.

Video posted to Twitter on Sunday purportedly shows the aftermath of the strike — but instead of a fiery wreck, al-Urduni and al-Sanaani's vehicle appears relatively intact, the roof and windshield impacted from above and one side shredded:

A US strike kills a notable al-Qaeda leader in Syria. A video of the car he was in. pic.twitter.com/5qtVukN5O1 modern weapons!

The absence of an explosion and the pattern of damage to the roof and sides of the vehicle suggest that the drone didn't employ a conventional precision-guided munition but the R9X variant of the AGM-114 Hellfire missile, a non-explosive weapon that can best be described as a 100-pound flying switchblade or an anvil covered in swords.

First publicized by the Wall Street Journal in 2019 and colloquially known as the “flying Ginsu” or “ninja bomb,” the R9X is elegant in its simplicity: rather than packing an explosive payload, the kinetic warhead contains a halo of blades that deploy moments before impact and effectively eviscerate a target without the potential civilian casualties that accompany a large explosion.

Although the R9X, developed in a collaboration between the Defense Department and Central Intelligence Agency, is technically a secret, the distinctive effects of the munition have become increasingly recognizable since the U.S. government reportedly started deploying it downrange against targets in Syria and Yemen in 2017.

Indeed, the impact patterns on al-Urduni and al-Sanaani's vehicle appear to match those on the car of Ahmad Hasan Abu Khayr al-Masri, the al Qaeda second-in-command who, according to the Wall Street Journal, the CIA allegedly targeted and killed with an R9X in Syria's Idlib province in February 2017.

The same pattern also appears on the vehicle of Abu Ahmed al-Jaziri, a foreign fighter for al Qaeda offshoot Hayat Tahrir al-Sham who was killed in a drone strike in December 2019.

The international Coalition carried out an air strike near Atmeh, northwestern Idlib, apparently with the R9X Hellfire missile, which does not have an explosive charge. The areas is controlled by Hayat Tahrir al-Sham. More on the missile: https://t.co/GSDlirp2D2 pic.twitter.com/h1HnVU3qVJ

The use of the R9X hasn't been restricted to Syria and Yemen: According to The War Zone, photos from the aftermath of a January 2019 airstrike against a suspected Taliban commander in Afghanistan's Kunduz province suggest that the unusual missile was used to neutralize that target.

With that in mind, this most recent apparent deployment of the R9X against a suspected terrorist downrange suggests that the Pentagon is increasingly embracing the Hellfire variant as a low-collateral precision strike weapon — and, as a result, the military's flying switchblade is becoming more of a necessity on the battlefield rather than just a mere oddity.