You can almost smell the gunpowder in the scene captured by a Marine photographer over the weekend, showing a Marine... 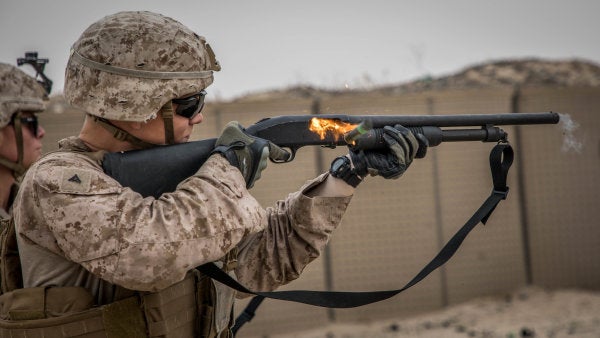 Our friends at Military Times' Outpost first spotted the photo.

Bourque uploaded an entire gallery of photos that showed more of the non-lethal training exercise, with Marines setting up in a Spartan-like phalanx of riot shields before throwing out pepper grenades and others firing a non-lethal sting grenade out of a shotgun.

The Corps has been using the standard Mossburg 500-series of shotguns since at least the 1980s, according to The Drive, as well as the Remington 870. The service uses shotguns mainly in a breaching role, although they can also fire rounds filled with non-lethal balls that will certainly ruin someone's day but won't kill them.

The Marines in the photos are from 2nd Battalion, 7th Marine Regiment, based out of Twentynine Palms, California.