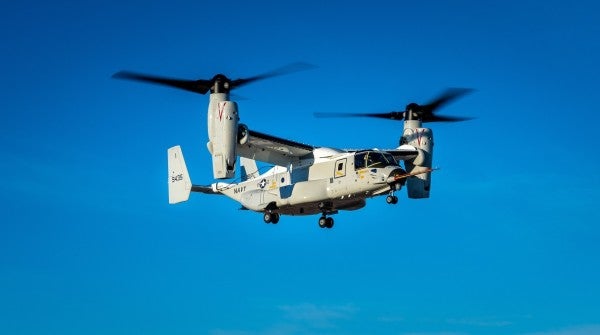 Produced by Boeing and Bell Textron as a variant of the Marine Corps MV-22 and Air Force CV-22 Ospreys, the CMV-22B is intended to replace the Navy's aging C-2A Greyhound fleet as the service's “long-range/medium-lift element of the intra-theater aerial logistics capability,” according to a Naval Air Systems Command fact sheet.

Once accepted by the Navy, the CMV-22B will be employed to haul up to 6,000 pounds of “personnel, mail, supplies and high-priority cargo from shore bases to aircraft carriers at sea” at ranges of up to 1,150 nautical miles, according to Boeing.

“The CMV-22B will be a lifeline for our servicemen and women out at sea,” Boeing vice president Kristin Houston, vice president, Boeing Tiltrotor Programs and director, said in a statement. “The quality and safety built into this aircraft will revolutionize the way the U.S. Navy fulfills its critical carrier onboard delivery mission.”

The Navy first announced its plan to replace its last C-2A Greyhounds, which date back to the 1960s and are scheduled for retirement by 2024, back in 2015. The service subsequently awarded a $4.2 billion contract to deliver a first batch of 39 CMV-22Bs to Boeing and Bell in mid-2018.

The CMV-22B “will provide the Navy with significant increases in capability and operational flexibility over the C-2A,” according to the NAVAIR fact sheet. “The Osprey is a critical warfighting enabler, providing the time sensitive combat logistics needed to support combat operations.”

According to USNI News, the Navy in late 2018 established its first Osprey squadron as Fleet Logistics Multi-Mission Squadron 30 at Naval Air Station North Island in California ahead of a planned operational detachment deployment with the USS Carl Vinson aircraft carrier in 2021.

Boeing and Bell will deliver the first CMV-22B to Air Test and Evaluation Squadron (HX) 21 in early 2020 for a developmental test.