The U.S. military has “quite literally surrounded” the East Coast states that Hurricane Florence is expected to hit with personnel... 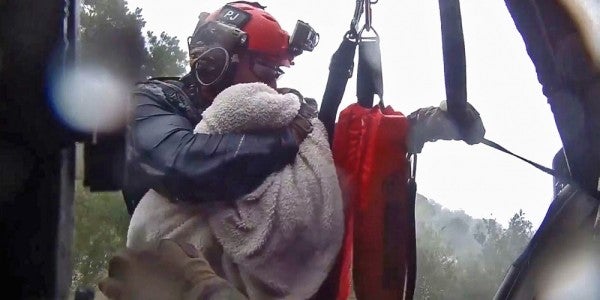 The U.S. military has “quite literally surrounded” the East Coast states that Hurricane Florence is expected to hit with personnel and equipment, which are poised to swoop in to help people in need, said Air Force Gen. Terrence O’Shaughnessy, head of U.S. Northern Command.

A total of 7,000 U.S. troops have tasked with taking part in relief efforts, of which about 3,000 are active-duty service members, O’Shaughnessy told reporters on Thursday. Thousands of other troops from all military branches have been ordered to prepare to deploy if needed.

Florence is expected to bring heavy rains to North and South Carolina as well as Georgia. The storm could especially drench certain areas if it stalls for several hours, according to the National Weather Service.

Roughly 800 Marines from the 22nd Marine Expeditionary Unit are also aboard the ships along with Navy Seabees and a fleet surgical team, Seibel said.

The Defense Department has staged roughly 80 Light Medium Tactical Vehicles at Fort Stewart, Georgia, and Fort Campbell, Kentucky, which can be used to carry supplies and rescue trapped people in flooded areas, O’Shaughnessy said. Another 40 high-wheeled vehicles and seven helicopters are standing ready at Fort Bragg.

In addition, the Army has 35 helicopters for search and rescue at Hunter Army Airfield, Georgia, and another such unit at Fort Bliss, Texas, is ready to respond.