'Apparently, somewhere in the chain, there is a senior U.S. government official who is hesitating or stalling,' Debra Tice reportedly said at the National Press Club in Washington, D.C. 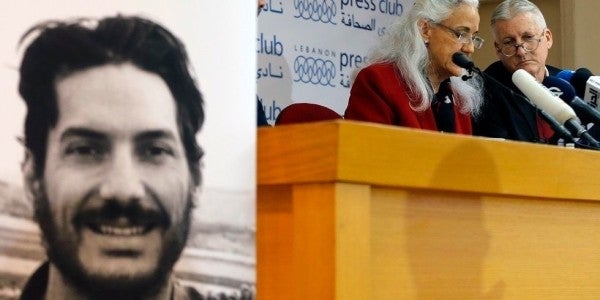 “Apparently, somewhere in the chain, there is a senior U.S. government official who is hesitating or stalling,” Debra Tice reportedly said at the National Press Club in Washington, D.C.

The Syrian government sent Debra Tice a message in March 2014 that they would be willing to meet with a U.S. official to negotiate her son's release, Connecting Vets reporter Abbie Bennett wrote in her article about the event.

“There is no possible way for me to understand why anyone would defy the president's will and choose to leave our beloved son, who put his life on the line serving this country three tours as a Marine Corps officer, waiting in captivity instead of taking the necessary steps to get this critical discussion underway,” she said.

A senior administration official told Task & Purpose on Monday that bringing U.S. hostages home is a top priority for the president.

“The U.S. government works tirelessly on each and every case of an American being held hostage abroad and we will continue to do so in the case of Austin Tice until he is back home with his family and loved ones,” the official said.

Austin Tice was taken prisoner on Aug. 14, 2012 while he was working in Syria as a freelance reporter. He later appeared in a Sept. 26, 2012 video that was posted to YouTube. He was blindfolded and his captors wore jihadist garb but it was not known if they were disguised allies of the Syrian regime.

Air Force Maj. Gen. Alex Grynkewich, the deputy commander for intelligence and operations for U.S. troops in Iraq and Syria had no information about Austin Tice's status or U.S. government efforts to secure his release when a reporter asked him about the issue on Jan. 22.