'If he is alive we would very much like to get him back quickly,' President Donald Trump said on Thursday. 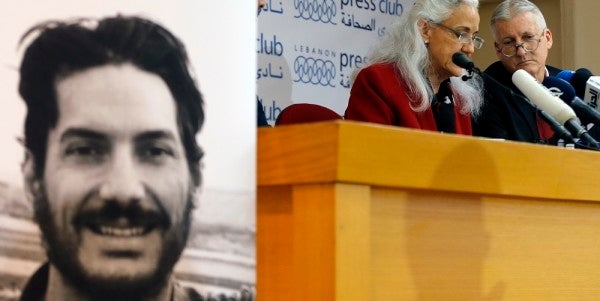 President Donald Trump made a renewed call for Marine veteran Austin Tice to be released from captivity, although the president could not confirm that Tice is still alive.

“We have one young gentleman, Austin Tice, and we’re working very hard with Syria to get him out,” the president told reporters at a Thursday White House press briefing. “We hope the Syrian government will do that. We are counting on them to do that.”

Tice went missing near Damascus, Syria, in 2012 while working as a freelance journalist. Other than a September 2012 video posted on YouTube showing him blindfolded and surrounded by armed men, there has no public sign of Tice since he went missing.

On Thursday, Trump appeared to confirm for the first time that the U.S. government believes that Tice is being held by forces loyal to Syrian dictator Bashar al-Assad, not rebels.

“Syria, please work with us,” the president said. “We would appreciate you letting him out of there. Think about what we’ve done. We’ve gotten rid of the ISIS caliphate in Syria. We’ve done a lot for Syria. We have to see if they’re going to do this. So, it would be very much appreciated if they would let Austin Tice out immediately.”

However, in a subsequent exchange with CNN reporter Kaitlan Collins, Trump acknowledged that the U.S. government is trying to determine if Tice is still alive.

“If he is alive we would very much like to get him back quickly,” the president said.

Tice’s parents Marc and Debra issued a statement on Thursday thanking Trump for “the tireless work President Trump is doing” to get their son home safely.

“His efforts for our son are unmatched and his support and commitment mean the world to us,” the statement says. “The President has our deepest appreciation.”

“At this very disturbing time for our nation and the world, it is more important than ever to get Austin safely home,” the statement continues. “As President Trump said, we ask the Syrian government to do all they can to locate and safely return Austin to our family. May it be soon!”

The president spoke on the same day that the State Department announced Iran had released Navy veteran Michael White from prison. White, who had been held by Iran since 2018, is currently at the Swiss embassy in Tehran, according to the Wall Street Journal. Iran has demanded that White stay in the country as a condition of his release.

Trump has publicly committed himself to securing the safe release of Americans held hostage or in prisons abroad. The president has also taken a personal interest in Tice’s situation, promoting the CIA to renew its efforts to learn where Tice is being held, according to New York Times reporters Adam Goldman and Julian E. Barnes.

Earlier attempts by the CIA and Secretary of State Mike Pompeo to secure Tice’s release through back channel negotiations have failed, the New York Times reported. Pompeo also refused to let the Trump administration’s top hostage envoy at the time travel to Damascus to negotiate with the Syrian government directly.

It is unclear if this is what Debra Tice was referring to when she said in January that an unnamed “senior U.S. government official” was refusing to allow a meeting with the Syrian government about her son.

“There is no possible way for me to understand why anyone would defy the president's will and choose to leave our beloved son, who put his life on the line serving this country three tours as a Marine Corps officer, waiting in captivity instead of taking the necessary steps to get this critical discussion underway,” Debra Tice said on Jan. 27 at the National Press Club in Washington, D.C.

Marc Tice told Task & Purpose on Thursday that neither he nor his wife would make any comments beyond their statement.