WASHINGTON, D.C. – More than six years after Austin Tice was taken hostage in Syria, the U.S. government is confident... 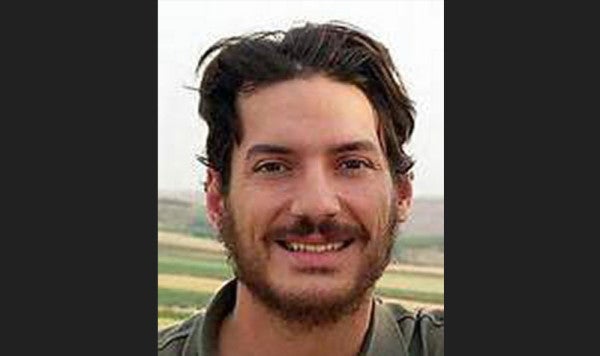 WASHINGTON, D.C. – More than six years after Austin Tice was taken hostage in Syria, the U.S. government is confident that the Marine veteran and journalist is still alive, the State Department’s special envoy for hostage affairs said on Tuesday.

“I want to make it very clear that the United States government believes that Austin Tice is alive,” Robert O’Brien said at the National Press Club. “We’re deeply concerned about his well-being after six years of captivity.”

O’Brien declined to say on Tuesday if the U.S. government has received evidence that Tice is still alive since 2012. Nor would he say which group is believed to be holding Tice.

“I can tell you the president is aware and is briefed regularly on Austin’s case and he wants Austin Tice back with his friends and family as soon as possible,” O’Brien said.

Photo of Marine veteran and journalist Austin Tice, who went missing while reporting in Syria in 2012.Photo Courtesy of Wikimedia Commons

O’Brien noted that the Marine Corps birthday was Nov. 10, and although Tice left the Corps to become a journalist, he still has the toughness of a Marine.

“I’m sure that is sustaining him through these incredibly trying circumstances,” O’Brien said. “The Marine Corps … is ‘Semper Fidelis:’ Always Faithful. I want Austin and his parents to know that we’re going keeping the faith with you, and we’re going to continue to pray but we’re also going to continue to work as hard as we can until Austin is back in the United States and back together with his family and friends.”

In April, the FBI announced a $1 million reward for information leading to Tice’s safe return. Now the National Press Club plans to raise money to increase the award amount, in case it is helpful.

Participating restaurants in the Washington, D.C., area will hold a May 2 fundraising effort called “Night Out For Austin Tice,” said Andrea Edney, a Bloomberg News editor who is also National Press Club president. Fifty percent of the restaurant revenue will go toward matching the FBI’s reward and the rest will cover costs associated with the event, such as food.

“The funds that are submitted by our restaurant partners are going to go to the National Press Club Journalism Institute, our non-profit affiliate,” Edney said on Tuesday. “That’s going to be held there pending direction from the FBI, which is directing the reward program. We’re not going to do anything with the funds until we hear from the FBI.”

If Tice is safely returned without a reward being paid, the National Press Club will talk to his parents about donating the funds raised to charities, she said.

Marc Tice said he and his wife have no doubt that there son will eventually return home safe.

“It’s the consensus that Austin is alive,” Marc Tice told Task & Purpose. “You heard it several times in today’s event, there’s no question that he’s alive and reasonably well, although more than six years in captivity is – I can’t even imagine; I don’t want to imagine.”

“So, there’s absolutely no reason to believe anything else. We have complete confidence and faith that he’s going to come home. That’s what we’re preparing for. As much as we’re working to bring him home, we spend a lot of time preparing for and thinking about what we need to do when he gets back to get him back on his feet and get his life going again.”