For Once, The Army Is Getting The Marine Corps’ Old Crap

It's a common trope that the Marine Corps gets their equipment secondhand from the Army, but at least in the... 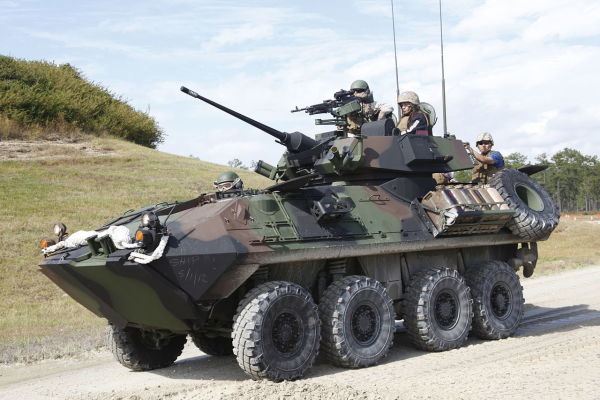 It's a common trope that the Marine Corps gets their equipment secondhand from the Army, but at least in the case of a new unit within the 82nd Airborne Division, it's going the other direction.

On Friday the Army reactivated A Company, 4th Battalion, 68th Armor Regiment, which means the 82nd will once again have a light-armored parachute infantry — only this time, they'll be rolling in Marine Corps-made light armored vehicles.

The “Airborne Thunder” unit has the LAV-25A2 in its arsenal, most still emblazoned with a “USMC” stencil on their side, according to the Fayetteville Observer. The Army chose that vehicle over its Stryker combat vehicles since they were smaller and lighter, allowing more of them to be loaded on an Air Force transport.

First brought into service in 1983, the LAV-25 is an eight-wheeled amphibious reconnaissance vehicle that fit in quite nicely with the Marine Corps' push into maneuver warfare. Armed with a 25mm chain gun, a couple of M240 machine guns, and six fully-armed Marines in the back, the LAV (with a top speed of 62mph) emphasized outmaneuvering “enemy forces over firepower to win battles,” according to The National Interest.

Although the Army was initially involved in the program, it declined to adopt it — despite some experimentation with the vehicle over the years.

That is, until now.

And the company commander is pretty excited about the prospect:

“As the unit’s first commander I hope to get the unit equipped and train the Paratroopers on the vehicles and equipment we’ve received,” said Capt. Aram M. Hatfield. “The vast majority of them have never been on an armored vehicle before.”

More importantly, Hatfield said he has one Paratrooper who was a former Marine who has some experience with the equipment and vehicle which will be an asset with the training his Paratroopers will receive in the upcoming months.

“I would like these guys to be experts on these vehicles and experts on the doctrine that we are going to develop,” said Hatfield.

Although Marines reading this will no doubt be thinking, haha Army, sweet revenge! It's important to note that the 4th Battalion, 68th Armor Regiment will still most likely get the phased plasma rifle in the 40 watt range many years before you do.