"Scalable grenades are more likely to be on hand, precluding the need to call up a breaching team" 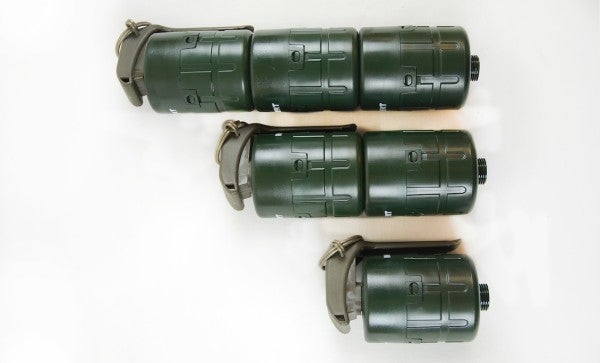 From flying tilt-rotor MV-22 Ospreys into combat to training with robot battle buddies, the Marine Corps has a history of pioneering unconventional technology and ideas for the American warfighter.

But one new weapon the Corps is looking into could really blow up big: a new, stackable hand grenade that could be used as a stun weapon, a lethal explosive, or even as an ad hoc breaching charge.

The Scalable Offensive Hand Grenade (SOHG), produced by Norway-based defense contractor and current M72 LAW source Nammo, gives an extensive shock effect with a very limited number of fragments. The grenades are specifically designed for use in closed rooms, such as bunkers, buildings or semi-closed areas such as trenches.

The logic behind the SOHG, referred to as the MK21 Mod 0 by Corps officials, is simple. The cylindrical grenades stack end-to-end like Lego pieces (or, as one Reddit user pointed out, Crayola markers) to give Marine grunts the capability to produce larger and larger blasts depending on the requirements of the mission.

Each module can have its own fuze, and grenades can be used either separately or by attaching two to three modules together, according to Nammo. One base SOHG grenade can provide a “high pressure stun” effect; two stacked grenades can kill a person; and three can destroy certain structures.

If adopted, the new grenade would be a departure from fragmentation grenades like the classic Mk 2 (also called the pineapple grenade) and the M67 that the U.S. military has used since the early 20th century.

While those grenades rely on dispersing metal fragments into adversaries at high velocity, the SOHG relies on over-pressurization to knock out, injure, or kill people or destroy structures.

A Nammo spokesperson told Task & Purpose, if the Marines adopted the SOHG, the grenade would prove handy as a quick and effective breaching tool for members of a standard infantry squad.

“Scalable grenades are more likely to be on hand, precluding the need to call up a breaching team,” the spokesperson said. “If the rules of engagement allow, scalable grenades can help the unit maintain the tempo of maneuvering the urban space.”

The scalability of SOHG, along with the fact that it relies on pressure rather than fragmentation, could also limit collateral damage, the spokesperson added. Unlike with the M67, which only provides lethal fragmentation, a single SOHG grenade would give Marines a potentially non-lethal option for clearing a room.

“A frag grenade will kill, injure, or stun based on the pressure and frags that impact the person, whether they be friendly or combatant,” the spokesperson said. “The SOHG single base unit will have a stun effect on all, but the effect is more likely to be temporary and less lethal than a frag grenade.”

Whether the Corps actually adopts the SOHG remains to be seen. While the grenade was on display at the 2019 Modern Day Marine exposition at Quantico, Virginia in September, a spokesman for Marine Corps Combat Development Command — which is responsible for developing and evaluating new technologies and concepts for the Corps —told Task & Purpose that Corps officials have not yet signed or approved a formal requirement document for the development of a grenade.

However, the MCCDC spokesman told Task & Purpose that the command is “interested and pursuing” the capabilities of the SOHG.