The House Armed Services’ Tactical Air and Land Forces Subcommittee has shed light on one of the more bewildering defense... 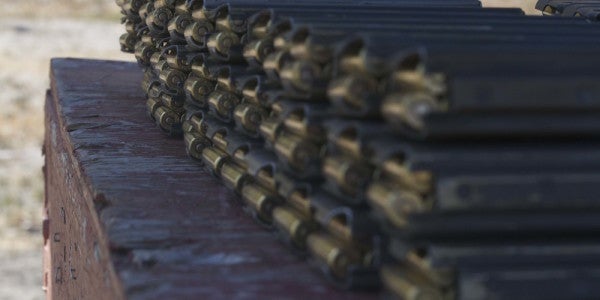 The House Armed Services’ Tactical Air and Land Forces Subcommittee has shed light on one of the more bewildering defense procurement realities: the Army and Marine Corps’ use different 5.56x45mm ammunition for what are largely the same group of weapons like the M4, M16A4, and the M249 Squad Automatic Weapon. The Army uses the M855A1 Enhanced Performance Round, while the Marines have made efforts since 2010 to switch to the Mk318 Special Operations Science and Technology round.

Subcommittee chairman Rep. Mike Turner said, “The Army and Marine Corps are using a very similar enhanced small caliber 5.56 rounds for the same operational environment,” in a quote for the Marine Corps Times. Obviously it, makes little sense for both branches to be using different ammo in the same weapons for the same application. Conventional wisdom would dictate that since the Army has significantly higher ammo purchase requirements due to its size, the smaller Marine Corps could switch to M855A1. But Turner's assertion that the M855A1 and Mk318 are similar bullets isn't quite accurate. The Marine Corps might just have a better bullet.

A lot of things regarding firearms are shrouded by innuendo, rumour, and urban legend. The 5.56mm round is no different. It has been maligned as a “varmint” round, a “poodle killer,” and “designed to wound rather than kill.” But, criticisms of the 5.56mm often fail to consider the specific ammunition being used.

The M855A1 round was an upgrade to the Cold War-era M855. Initially, the improved round was simply supposed to be a more environmentally friendly version of M855. The program expanded to make the M855A1 a generally more lethal bullet. A 2010 study by the Army Research Laboratory revealed that all small arms rounds yaw dramatically in the first 50 meters of flight. For the M855, a bullet with limited fragmentation, this can have a significant effect on the round's terminal effectiveness.

While the M855A1 has solved this problem, it still has some fundamental flaws. First, the round has been shown to have an increased chamber pressure, accelerating the chamber pressure. The round is a better penetrator than its predecessor, but it is perhaps too good, as the Army has had to stop the use of the round in close-quarters-battle “shoot houses” because of over penetration. Finally, a civilian ammo manufacturer successfully sued the Army for patent infringement, citing that the service had shared confidential information with other vendors to create the round. The Army will have to pay millions in damages per year every time it buys M855A1, until 2027 when the patent expires.

The Marines rejected M855A1 in 2009 and instead looked to the Mk318 bullet. The round was began development in 2005 after special operations units found the M855 to be ineffective in short-barrelled guns like the M4 and Mk18. The bullet features a copper front with an open tip, followed by solid brass. The open tip design creates consistent fragmentation, while the solid core continues to penetrate. This creates a round that is “barrier-blind,” meaning it can penetrate walls and windshields and still maintain lethality. The round has been deployed by the Marines in Afghanistan, but performance data is limited, especially given the insurgents’ practice of removing their dead from the battlefield.

The environmental concerns in both programs, and the issues with the M855A1 in close-quarters training, illuminate a practice that makes little sense to many civilian shooters who buy their own ammo. Both the Army and Marine Corps use the same rounds they fire in combat in training. In the civilian shooting realm, shooters use cheap ball rounds with similar ballistics to replace their “real-world” bullets for training to reduce costs, and avoid wasting their expensive hollow-point ammunition. Range targets don’t need bullets with enhanced penetration or lethality, so why spend so much money on expensive ammo that will be wasted on paper?

A better bullet can enhance a infantryman's punch, but the clash between M855A1 and Mk318 belies a fundamental truth about combat shooting: You can’t beat shot placement. Detractors of 5.56mm, or really most firearms calibers, forget that shot placement is king. And despite decades of research, there’s still plenty of argument about what are the most important characteristics of a bullet to impart lethal effects on a human body. Just ask the Navy SEAL who was shot 27 times. He managed to engage and kill three insurgents with his handgun. If any of those insurgents had survived long enough to post on a gun forum, the 9x19mm would be seen as the most lethal round in history while the 7.62x39mm AK bullet would be derided as a “goat-killer.”

Quoted in the May 4 Marine Corps Times article is Larry Vickers, a former Delta Force operator and tactical shooting instructor who has contributed to the design of several small arms. He cautions against focusing simply on ammo, saying:

“Tackle some training deficiencies first. Go out and issue M193 ball (the predecessor to original M855 to Delta and they will hand anyone their ass on a platter because they are bringing training and technology together. … You can't bypass the first step. You need guys who can hit targets in a variety of situations under stress, bringing the skill to the table that warrants that ammo.”

Ultimately, it is the archer who decides the battle, not his bow or arrows. If troops don’t get modern combat shooting techniques down, then the M855A1 versus Mk318 or 5.66mm versus any other caliber debates are meaningless.

EDITOR'S NOTE: This story has been updated to more accurately characterize the nature of bullet yaw and shot placement. (5/15/2015)