Bond Between A Marine And His Dog Continues After Death

On Feb. 26, Tammie Ashley welcomed a new addition to her family: Sirius, a military working dog that once belonged... 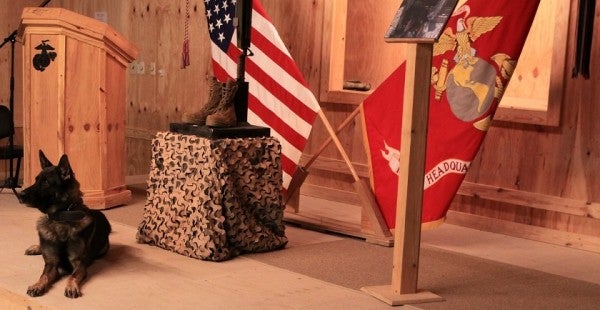 On Feb. 26, Tammie Ashley welcomed a new addition to her family: Sirius, a military working dog that once belonged to her son, Sgt. Joshua Ashley, who was killed in Afghanistan while serving with a U.S. Marine Special Operations Command team in 2012.

Ashley was clearing a route for a MARSOC team through Zombalay Village in Helmand Valley on July 19, 2012 when he was struck by an improvised explosive device, according to a Marine Corps news release.

During a passing of the leash ceremony, Tammie had a chance to meet Sirius at the Ashley Kennels at Camp Lejeune, North Carolina, which was named after her son in March, 2015.

“He told me the last night before we lost him that he wanted to adopt Sirius and that he wanted me to take him until he was able to have him,” said Tammie, who came to North Carolina from their home in Rancho Cucamonga, California to attend Sirius’ retirement ceremony. “So, ever since he passed away, we have always wanted to get him.”

After Ashley’s death, his friend Sgt. Frederick Roethler took over handling Sirius. But when Roethler heard that Ashley’s family was looking to adopt the military working dog, he was more than happy to pass the leash on.

“Sgt. Ashley and Sirius are one and the same person, and that family needs to be brought together with Sirius,” said Roethler. “It’s amazing to see it finally happening and his family is able to have a little bit more closure and they get to have something else in their lives that will get to remind them every day of everything that they loved about Josh.”

For Ashley’s family, it’s another way to keep his memory alive.

“It means that we get a part of Josh,” said Tammie. “My son was never able to have children. He always wanted children and I kind of look his child. So my son’s baby is coming home to me. That’s what [Sirius] is to me. He is going to be one of the family.”