The Other Side Of The Millennials In The Military Debate

Editor’s Note: A version of this article originally appear on Carrying The Gun, a blog by Don Gomez. You likely... 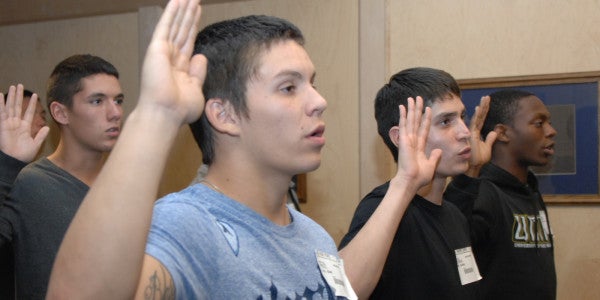 Editor’s Note: A version of this article originally appear on Carrying The Gun, a blog by Don Gomez.

You likely already saw the poll released in December from the Harvard Institute of Politics regarding millennials and their thoughts on ISIS and military service. To summarize, 60% of young Americans, ages 18–29, now support sending U.S. troops to combat ISIS on the ground, and just about the same percentage (62%) say that they would be unlikely to serve in the event the United States needed more troops for that fight.

The poll sparked a debate online in the military sphere and much of that debate manifested itself with military folks displaying indignation that a bunch of hipsters (that’s how I read millennial) want the military to go fight ISIS, but aren’t willing to go do it themselves.

This idea gets veterans worked up because it fits neatly into the continuing trope that there exists this “warrior class” made up of the “less than 1%” that does the nation’s dirty work while the latte-sipping, man-bun crowd critiques them from the sidelines.

At the heart of the discontent is the fact that a generation of Americans would be willing to send American troops to war but not willing to serve themselves in that same war — a concept that feels like it betrays American values.

The difference here is that for once the latte-sipping, man-bun crowd actually supports direct ground combat against someone.

What has been lost in the debate is the fact that this poll, in a strange way, validates the all-volunteer force as a concept. This is the first generation of Americans who grew up outside of the shadow of Vietnam, and instead under the warm blanket of “shock and awe,” Call of Duty, and “Zero Dark Thirty.” All of the conflicts this generation has seen came completely through electronic screens, fought by an all-volunteer military with very little asked of them. They’ve seen the Persian Gulf War, Somalia, Kosovo, Afghanistan, and Iraq. Years upon years of war, fought by someone else.

This is a generation that not only feels comfortable sending the military to fight wars they are not personally interested in fighting, it is the only thing they know — it is the norm.

We have created exactly what we sought to create: a specialized, professional military filled with volunteers who want to serve, and a populace that feels comfortable using it.

Instead of getting upset about it — because really, there’s nothing you can do — shouldn’t we be celebrating it?