Why Are So Few Millennials Willing To Join The Military?

Millennials love other peoples’ service. To deny otherwise is to deny both recent polling and common observation. When terrorists attack... 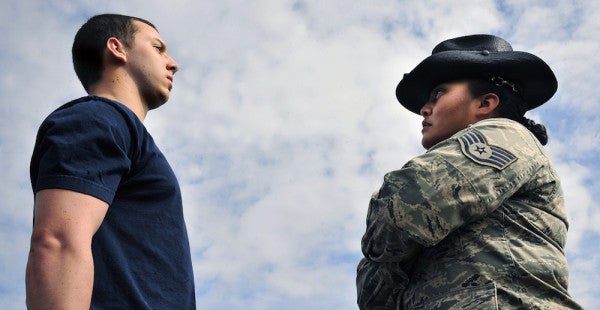 Millennials love other peoples’ service. To deny otherwise is to deny both recent polling and common observation. When terrorists attack our country or our allies, millennials are in line with every other demographic group in America in supporting increased security measures, use of force, and military service.

They just don’t want to be the ones to do it.

According to research conducted before and after the Paris attacks by theHarvard Institute of Politics, a full 60% of millennials (adults between 18 and 29 years old) now support the use of ground troops in combating the Islamic State. Yet when asked if they would be willing to serve in the armed forces, only 15% conveyed any willingness at all to do so.

While plenty of theories abound as to why that is, the facts are the millennial generation is less involved, less interested, and less engaged than members of Generation X or Baby Boomers. When compared to those generations, millennials are also less likely to talk about politics, rate it as a top interest, or step into a voting booth,according to Pew Research Center.

Men from Generation X weretwice as likely to have served in the military. Baby Boomers were six times as likely. And a young male in 1963? They were more than 11 times likelier to have served than a millennial male is today.

Related: Millennials are willing to let others fight for them »

So what’s going on here?

For starters, we can assume that for a time, prevalence of military service was not entirely correlated with a willingness to do so. While military service was much more likely for young men in the 1960s, the Vietnam War and a thing called the draft played a key role in that phenomenon. Even so, approximately75% of service members in Vietnam were volunteers, while more than1,800,000 citizens were drafted over the course of the entire conflict out of the9,087,000 who served on active duty during the period.

Yet even since the end of the draft in 1973, subsequent generations have been less and less likely to serve in the military. Not all of this is due to the recalcitrance of millennials of course. With the end of the Cold War, there have beenfewer positions available to join in the military. And for millennials in targeted recruiting age ranges,more than 70% would not be able to join if they wanted to due to issues with health, education, and physical appearance that do not adhere to military recruitment standards. This leads to the possibility that millennials could increasingly see military service as unattainable, and thus not an option worthy of aspiration.

That being said, we are still left with the fact that 85% of millennials have no interest serving in the military. Research has also shown that millennials aresignificantly less likely to describe themselves as patriotic than Gen Xers or Boomers, less likely to identify as members of the Republican Party, and less likely to exhibit social trust.

This is in sharp contrast to the military and the veterans it produces. In a study of post-9/11 veterans, Pew Research Center found thedemographic profile of this group to be much more likely to self-identify as Republicans and as patriotic. But perhaps the most defining feature of military service is the high degree of social trust required and cultivated among its members, an area of deficit among the millennial generation.

The comparison of these data points suggests a generation largely out of step with the institutions tasked with defending it. Even still, the threats we face as a nation are not closely related with our ability to survive. Terrorism, while an uncomfortable and in many ways unacceptable nuisance, is hardly an existential threat to the United States. This is especially true more than 15 years after the Sept. 11 attacks, with no successful follow-up attacks on American soil anywhere close in scale.

Russia and China can at times be thorns in the side of the United States, but hardly represent a Soviet-style behemoth wielding a sickle over our collective throats. North Korea is rightly viewed by many as a malfeasant and malicious power, but a third-rate one at best. And while Iran was once considered a bona fide member of the so-called “Axis of Evil,” sanctions and diplomatic outreach have turned the Iranian regime into an at least semi-pliable regional force without a nuclear program.

Without an existential threat to unite millennials, other avenues and expansions of service should be explored. Organizations likeThe Franklin Project have been instrumental in generating discussion and enthusiasm for service that spans different sectors of need, such as education, poverty, conservation, and education. These proposals could be further broadened to tie national service in with other high-profile issues like debt-free college. Doing so not only makes sense, but allows for service to both connect with theeconomic insecurity millennials face in comparison to past generations, and the individualism millennials continue to embrace.